City holds community preparation meeting for Something in the Water, College Beach Weekend 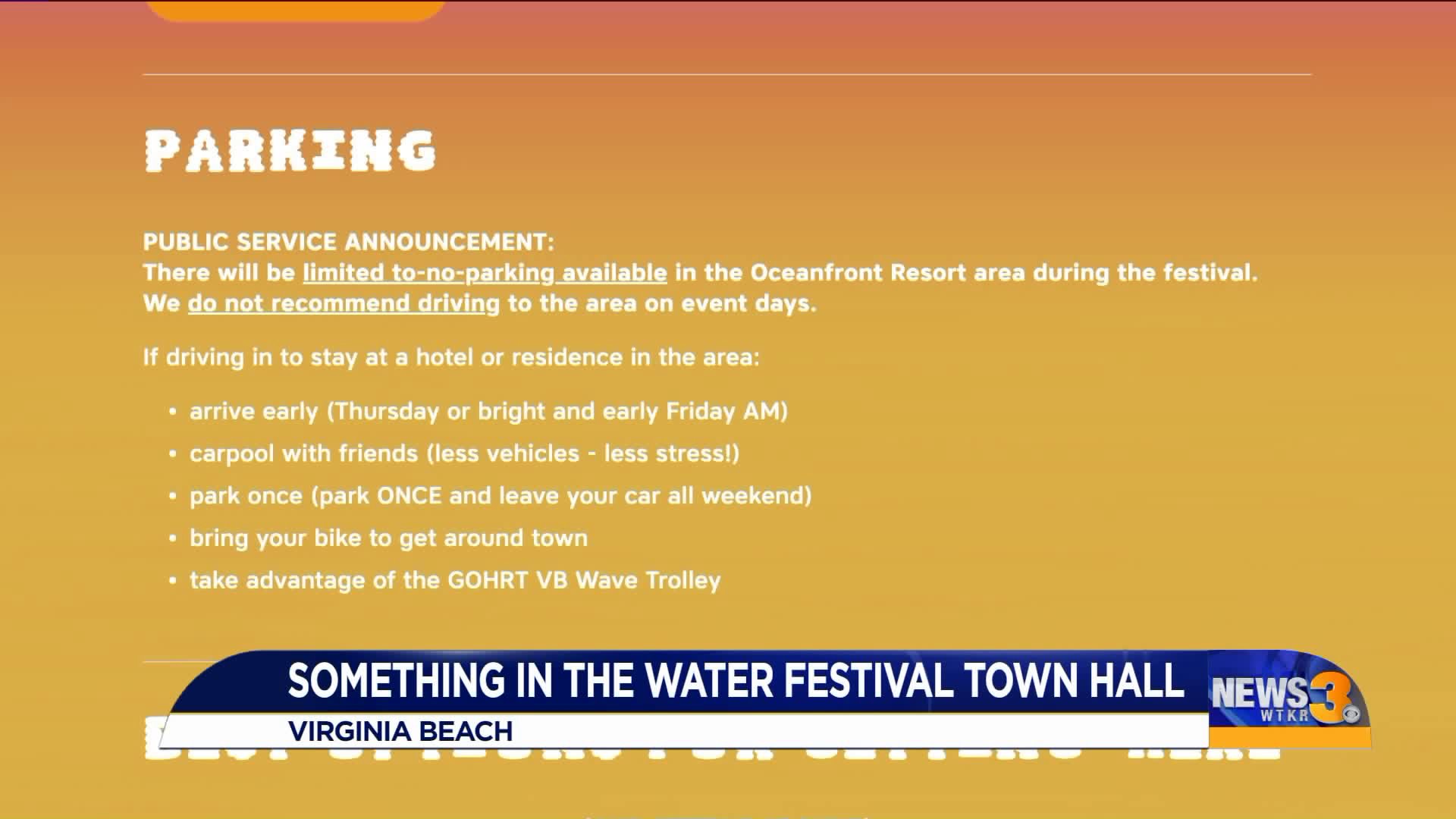 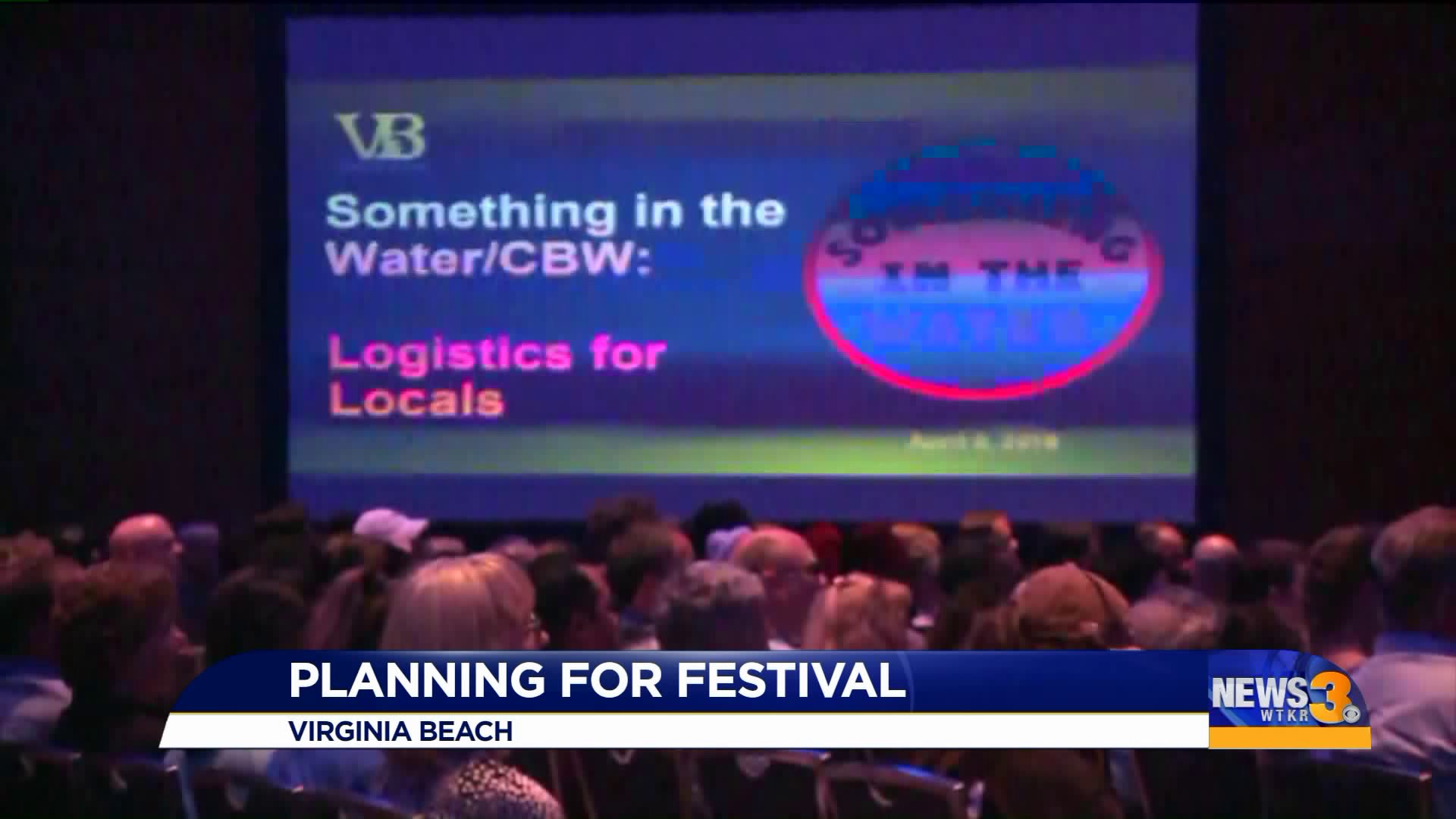 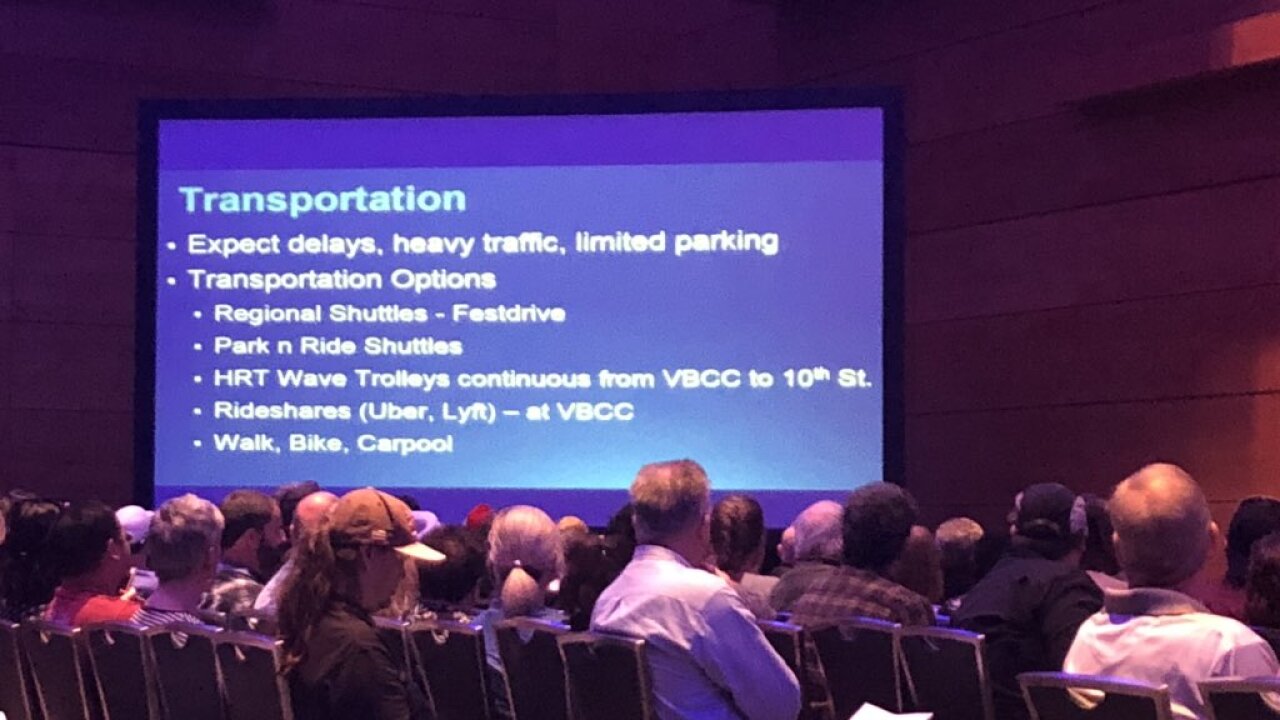 VIRGINIA BEACH, Va. - City leaders want everyone in Virginia Beach to feel prepared before two huge events are scheduled to take place at the Oceanfront in April.

Something in the Water festival lineup (Photo: SITW/Twitter)

This year, the inaugural Something in the Water festival coincides with College Beach Weekend. With programming stretching from Rudee Loop to the Convention Center to 31st Street, organizers are expecting huge crowds.

Hundreds of people showed up for Monday’s community meeting at the Virginia Beach Convention Center.

Anyone who lives in or near the Oceanfront area was encouraged to attend the meeting as well as Resort Area businesses and their employees.

The city, police chief and festival organizers all spent time answering questions and reassuring people that their plan is solid.

Like last year, residents and businesses in the 23541 zip code will receive direct mail with information. The official Something in the Water website will be the central source for news and updates.

The hot-button issue at Monday’s meeting was traffic. It’s a concern for people who live and work by the beach.

Virginia Beach is working with a shuttle service company that everyone can use. The city suggests people carpool, walk and bike as much as possible during the festival.

The festival says it is working closely with Uber and Lyft on designated pick-up and drop-off locations.

"There will be a time when this traffic is going to get extremely congested, and we're going to have to take other measure as we plan for the evening— and we're able to identify an issue, adapt to that issue and overcome that issue," says Cervera.

Community preparation meeting for #SomethingInTheWater is starting and the ballroom is packed! People I talked to say traffic is a major concern & they hope to get their questions answered tonight. https://t.co/AqjwznELid pic.twitter.com/7JVPdxz0OO

Organizers, businesses, civic leagues and management associations are working together to maintain access to the Oceanfront for businesses and residents near the festival footprint along Atlantic Avenue. Those who have any access-related questions may send them to Residents@SomethingInTheWater.com.

We are beyond excited to be a part of this amazing event! Less than 30 days until #SITWFest 🤩🎤🎼🔥🌊🎉 @Pharrell https://t.co/ATY4xf60du

Tickets for Something in the Water, organized by musician and Virginia Beach native Pharrell, officially sold out on March 27. The lineup for the three-day art, music and culture festival includes more than 30 artists, including Missy Elliott, Janelle Monae, SZA, Migos, Travis Scott, Dave Matthews Band, Snoop Dogg, Usher, Pusha T and Pharrell himself.

Organizers said they expect around 25,000 people to attend the festival each day.

Festival organizers say the Something in the Water app will launch Tuesday, which people can download for updates.

Organizers say the daily artist lineup will be posted on April 14, and that will give people a better look at when the busiest times for the festival will be.