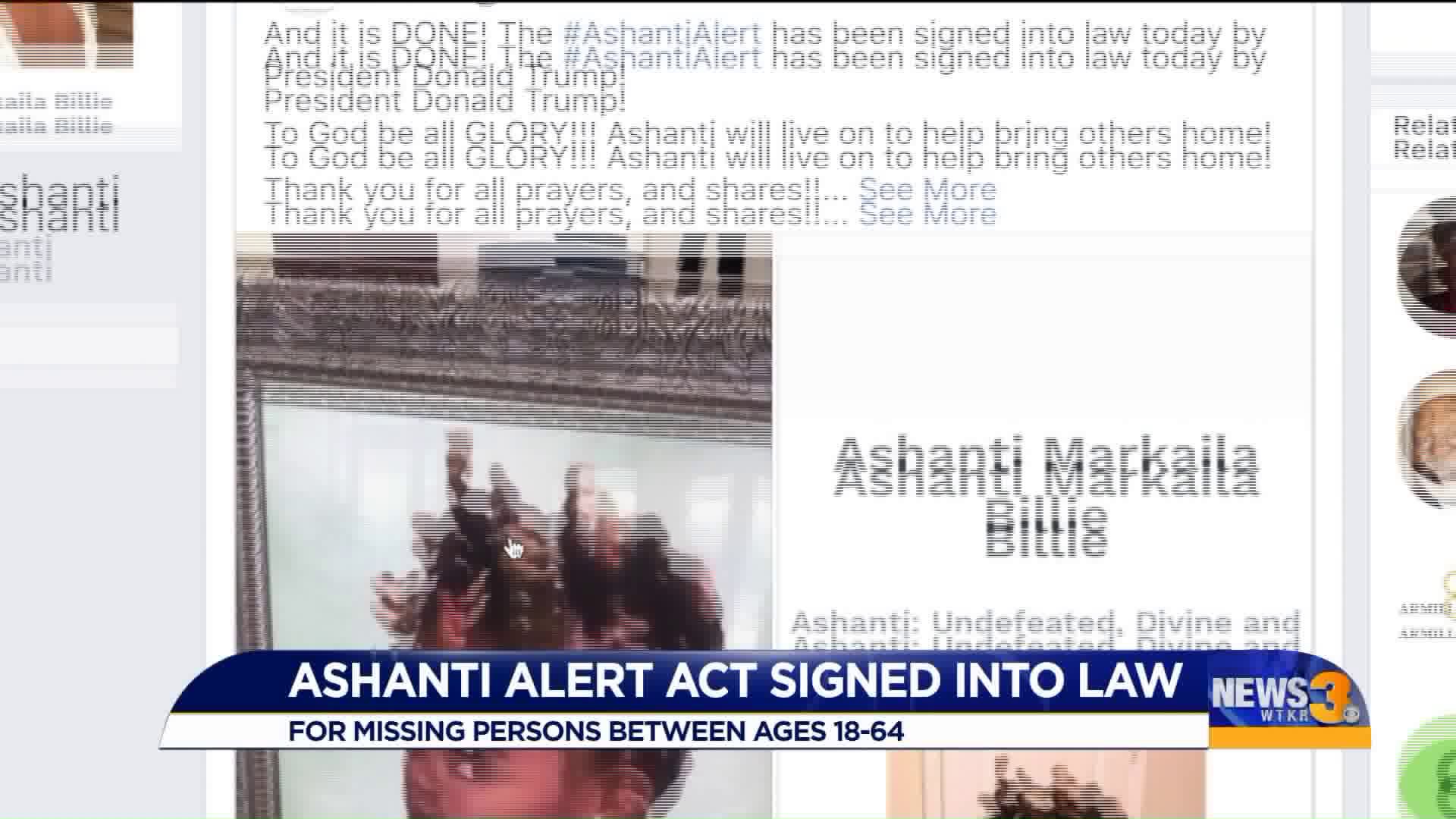 "When I received the call the night of New Years Eve, I had to take a moment to process it myself as it is bittersweet. But, it’s official, President Trump signed the Ashanti Alert into federal legislation/law on New Years Eve. Similar to both the Amber and Silver Alerts, the Ashanti Alert is a public notification system for missing adults between the ages of 18-65 that meet specific criteria as the other two alerts. While there was nothing in place for my daughter, through her tragedy and sacrifice there is now a notification system in place to help others. As we have entered this new year, I know that my daughter is smiling down on us all. In her afterlife she is still helping others as she did while she walked among us. I beg everyone that when you see an Ashanti Alert, Amber Alert or Silver Alert to please pay attention as it could help to save a life. In this social media world that we all live in, please take the time to repost something that could be lifesaving."

After the legislation passed the U.S. House, Meltony Billie thanked the politicians and the Hampton Roads community who helped their family get through the tough time after his daughter’s death. Meltony is the father of 19-year-old Ashanti Billie, a 19-year-old college student who was abducted from her job at JEB Little Creek in 2017.

“If you knew Ashanti, then you knew that you had a friend. I have said often that she never met a stranger. Though it has been hard coping with her leaving me, her earthly father, I have great joy knowing that she is with her heavenly Father and one day we will see one another again. I am eternally grateful for her life—a life well lived—because through the Ashanti Alert Act lives will be saved,” Meltony said. “I thank my family for carrying me when I began to weaken, I want to thank Michael Muhammad, Kimberly Wimbish, Attorney Don Scott, Delegate Jay Jones and his team, Congressman Scott Taylor and his team, Senator Mark Warner and his team, and I dare not forget about the Hampton Roads Community, and everyone who has being praying for my family.”

Similarly, Ashanti’s mother Brandy described the legislation as being “a beacon of hope for those that have a loved one deemed as missing under questionable circumstances.”

“We are elated that this legislation has been enacted. Just because my daughter’s life was tragically cut short, that doesn’t mean that my time as a mother, her mother is over; far from it. This federal legislation, the Ashanti Alert Act, is the first step in my current journey without my daughter by my side,” Brandy said.

Kimberly Wimbish, a spokesperson for the Billie family, announced in early November that U.S. Senator Richard Blumenthal (D-Connecticut) would officially introduce the act to the Senate.

In September, the U.S. House of Representatives voted to make the Ashanti Alert a federal law. The vote marked one year since then-U.S. Rep. Scott Taylor (R-Virginia Beach) got involved in Ashanti's case and announced his plans to push for a vote to take the alert national.

Taylor responded to the act becoming law on Twitter:

#breaking Had an emotional conversation w/Brandi Billie, mother of Ashanti & spoke w/her father Meltony. Thank you @realDonaldTrump for signing #ashantialert into law on this NYE. Out of this dark tragedy, light & hope will come for families across country in 2019. @MarkWarner pic.twitter.com/URsxPX49Eb

The Ashanti Alert Act was signed into Virginia law in June in Ashanti's memory.

After the House’s vote in September, Ashanti’s family says the Ashanti Alert will not only be a way to remember their daughter, but also a way to keep her greatest passion in life alive: helping others.

“It will be like a hug from her. Every alert will be a hug: ‘Hey Mom, I’m here. I’m helping people, Daddy, I’m here; I’m helping someone else.’ It was her passion,” said Brandy Billie.