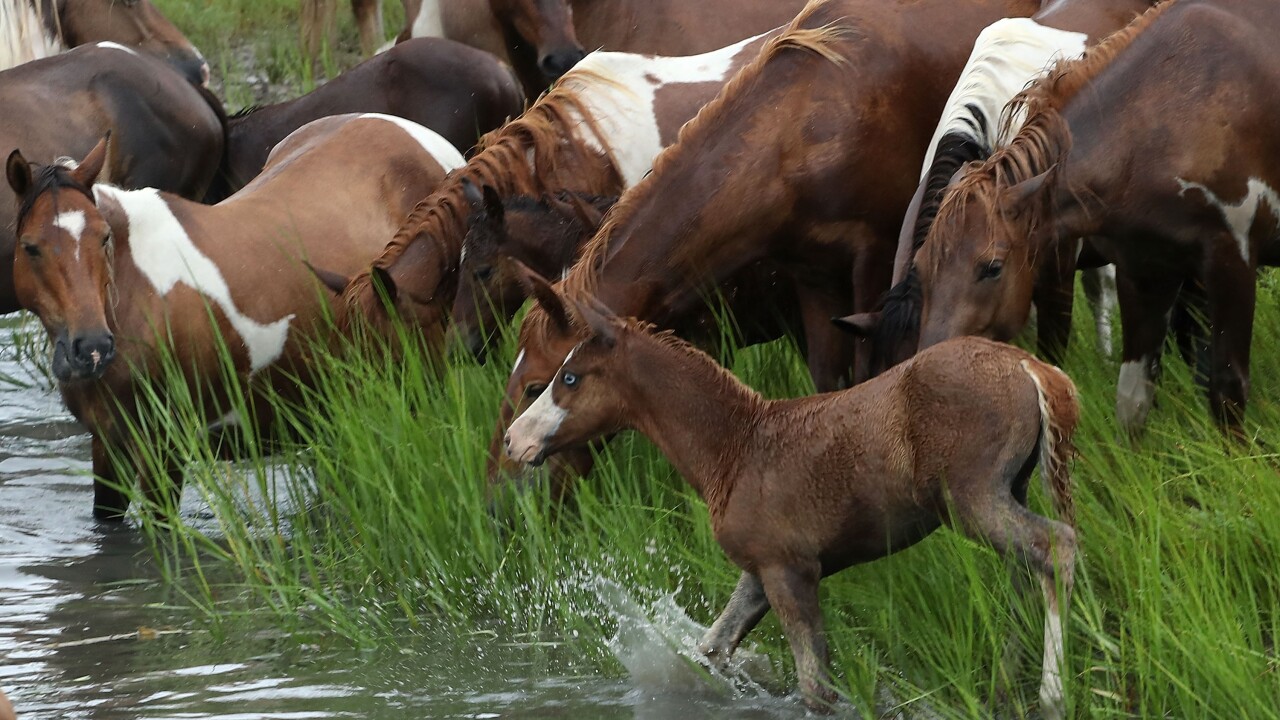 CHINCOTEAGUE, Va. – Shadow befriended an older stallion named Rainbow Warrior who had been alone for a long time. Essie became a mother again in 2018. And then there’s RainDancer, short for Kachina’s Shenandoah Raindancer. At 6 months old, she was all legs and as cute as a button.

In just a couple of months’ time, those three females and four other ponies were euthanized after a fungus-like disease produced ghastly lesions and other problems that proved too difficult to defeat. The last were put down near the end of December.

The losses have wounded a community fascinated and inspired by the famous wild Chincoteague ponies, which have grazed on a Virginia barrier island for centuries. No one’s sure how they got there: legend and a famous children’s book suggest they survived shipwrecks, while others say settlers loosed them on Assateague Island to feed.

While observers say the herd of about 150 wild ponies appears now to be healthy, there is concern of a re-emergence of the infection next summer, when warmer temperatures return.

Supporters are pinning their long-term hopes on a prevention vaccine under development, along with enhanced treatment for ponies in the grips of the infection.

“The real secret is catching it early,” said Darcy Cole, a photographer who spends 300 days a year studying the creatures. She spotted a few of the ill ponies and notified caregivers.

The Chincoteague Volunteer Fire Company, which manages the herd, brought in veterinarians to combat the disease, sometimes called “swamp cancer.”

“Outside of saving lives and properties these ponies are our No. 1 priority, said Denise Bowden, spokeswoman for the fire company. “We are animal lovers, too.”

The herd is a huge tourist draw and likenesses of them are ubiquitous on Chincoteague Island; sports teams for the high school are called the Ponies.

Amanda Geci, an Alabama resident who owns a Chincoteague pony, keeps a searchable pedigree database. She remembers seeing Essie, then a baby, during a visit.

The losses of the seven ponies and a few others in previous years are heartbreaking.

According to reports, sores on a few ponies’ legs were first noticed a couple of years ago.

Veterinarians determined they were suffering from pythiosis, a disease that traditionally has been associated with Latin America and Gulf states in the United States.

The organism typically grows on dead or dying grass and plants and is present near water, said Dr. Richard Hansen, a researcher whose Oklahoma company is doing work on a vaccine and enhanced immunotherapy to combat the infection.

From there, the disease can create lesions and it compromises the animal’s immune system.

Local veterinarians assisted the fire company in treating the infected animals. Pony supporters said doctors and fire company volunteers did all they could — using a variety of treatments, including immunotherapy — to save the animals.

Dr. George Marble of Eastern Shore Animal Hospital said he tried an antifungal treatment, and for a while it seemed the ponies were improving. But the pythiosis “came back with a vengeance,” he said.

“I think the efforts need to be in prevention,” said Dr. Allison Dotzel, a large-animal veterinarian. “It is a notoriously difficult disease to treat.”

Hansen’s company at some point will seek approval from the US Department of Agriculture to experimentally use a product “to quell this outbreak.”

Making a rapid diagnosis is crucial for the animal’s survival, experts say. But that can be a challenge.

“I might see one today and they may go into the woods,” Bowden said. “You may not see them for two weeks. By then, it is too late.”

Ponies are on the top of the chain on this island

You may recognize Chincoteague ponies from the famous five-minute swim they make every July.

About 35,000 visitors see the entire herd (minus newborns and pregnant mares) paddle the channel that separates the islands. Many more tourists come during the year to see the horses, shop or stay in motels on Chincoteague Island.

Long known as a fishing village, Chincoteague Island became synonymous with the ponies after the book “Misty of Chincoteague” and a later movie. “One-hundred and fifty head of ponies control the purse strings of the entire island,” said Bowden.

“We call it the ‘Misty’ mystique,” said Kendy Allen, who has owned about 100 of the breed over the years and operates the Chincoteague Pony Drill Team. Allen, who calls Chincoteague ponies a unique breed, said the animals are very smart. When domesticated, they can be used for all disciplines of riding, including jumping.

The volunteer fire company annually auctions off numerous foals — typically for about $3,800 — to raise money for firefighting equipment and costs. “Our citizens do not pay a fire tax,” Bowden said.

Allen said prospective buyers should understand their pet is not like a puppy or kitten; the foals are young and were not touched by humans before the July swim. “They are used to drinking from the ground. When you take one home, you need to put the bucket on the ground.”

Dotzel, a veterinarian in north-central Pennsylvania, bought Finn at a 2015 auction. “He likes to be challenged. He is not lazy at all. I think that is part of the breed.” She is trying to get him accustomed to a saddle.

Dotzel said there are online and other resources to help owners with training and care.

The fire company also chooses six to eight foals each year to serve as “buybacks,” a form of sponsorship that allows the bidder to buy and name the animal before it is returned to Assateague Island.

There’s another reason for the auction: controlling the pony population on Assateague.

The ponies owned by the volunteer fire company are on the Virginia portion of the island. Animals on the Maryland side are on land managed by a different federal agency. Birth control darts have been used there to control their numbers.

A barrier keeps the two populations apart. It’s not known whether any of the 80 estimated ponies on the Maryland side have become ill.

The Chincoteague Volunteer Fire Department deworms, vaccinates and checks the teeth and hooves of its herd.

For now, there’s hope that the disease can be effectively treated should it reappear. “We know we need to be more vigilant on every part of this in the coming year,” said Bowden. Hansen said he expects his immunotherapy products will complement other treatments.

Cole, who makes regular trips to Assateague Island, likes to check in on the 15 bands that make up the herd. Each family has about 10 ponies and their own grazing territory. They are a sight to behold.

“They are an American treasure,” Cole said.