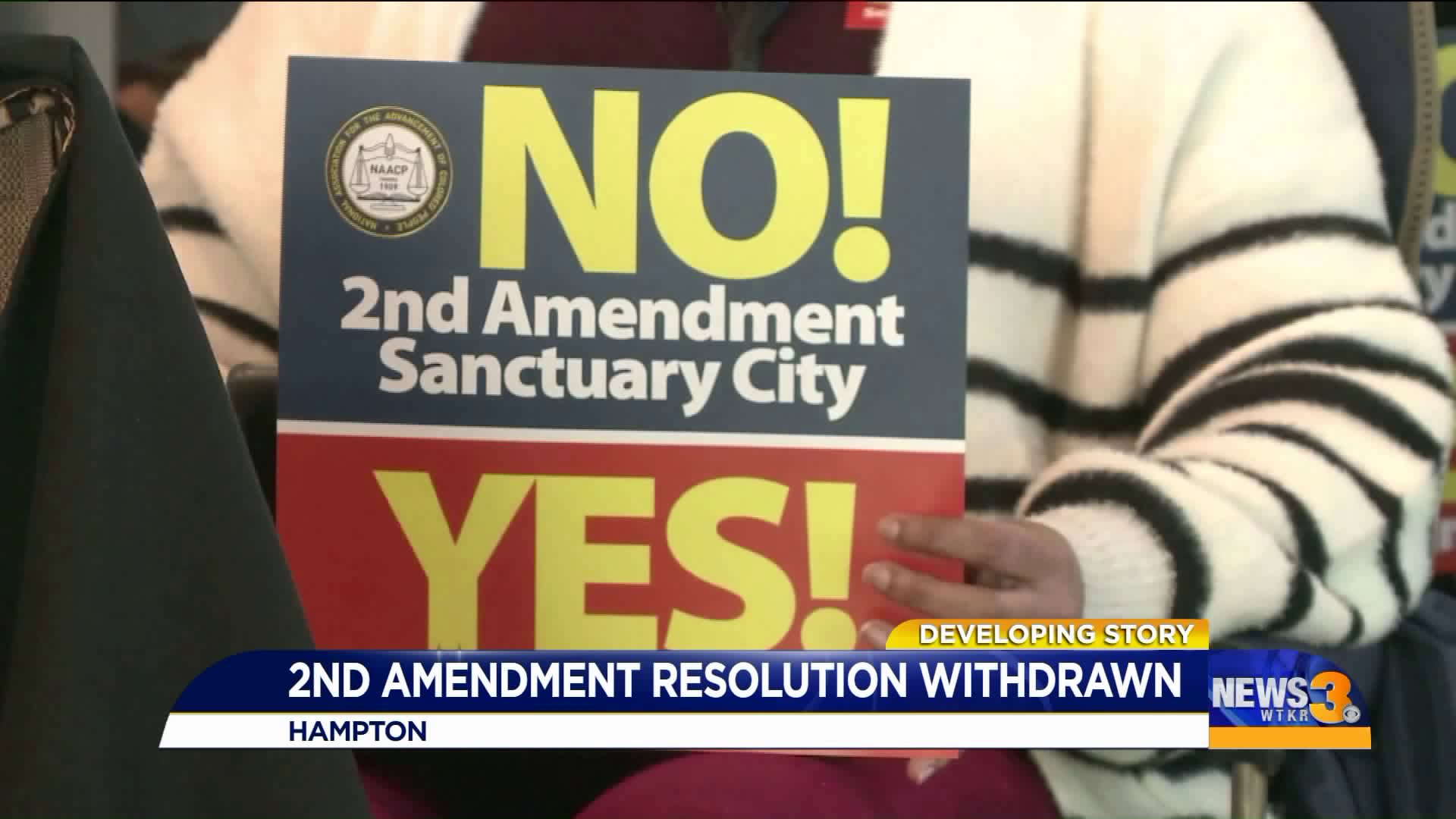 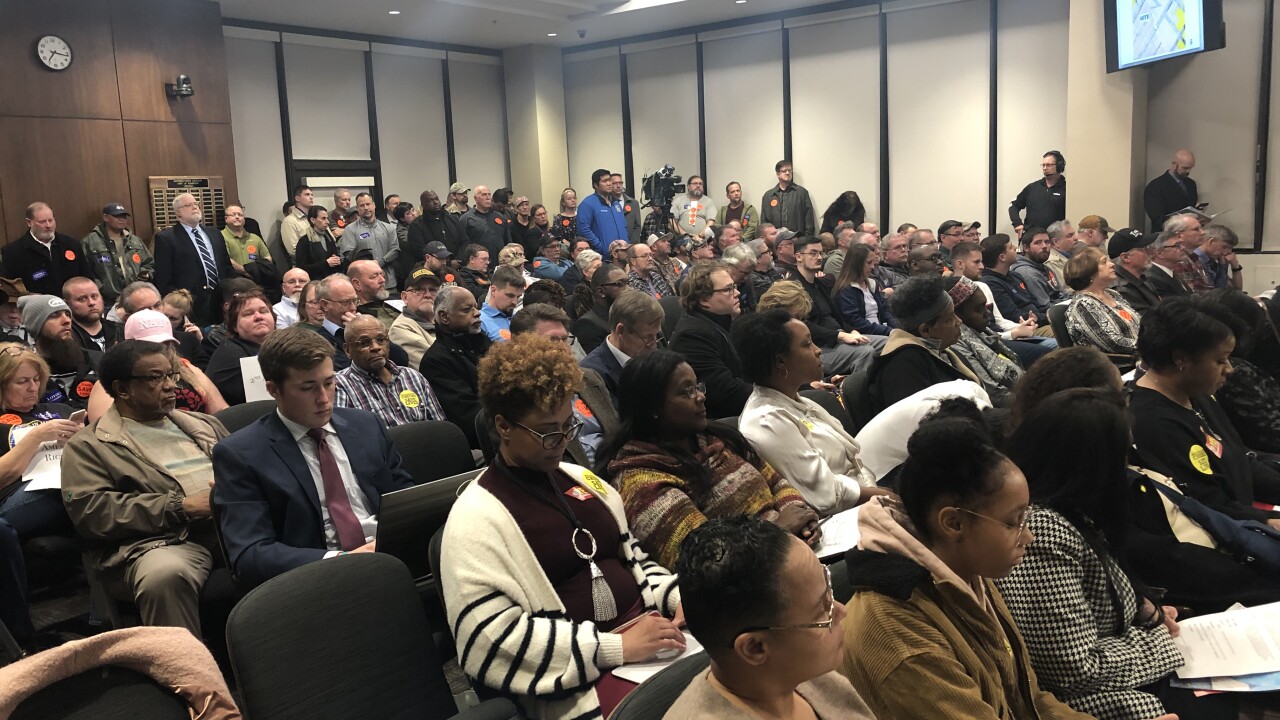 HAMPTON, Va. - Hampton city leaders decided not to vote on a resolution that would have supported Second Amendment rights.

The move came after hours of testimony. Supporters of proposed new gun laws cheered the move, while gun rights advocates walked out of the meeting after the decision.

Hampton City Councilwoman Eleanor Weston Brown withdrew the resolution after hearing from people on both sides.

In a full statement, the council said,

"We want to acknowledge the many people who came to our last Council meeting and this evening's meeting to address pending gun legislation at the General Assembly. We are so proud of how many people chose to positively engage with us on both sides of the issue. The audience was very passionate and yet also very respectful. This is Hampton - a very diverse and engaged community. We did not address the audience after the last meeting as we wanted to deliberate on all the voices. Today we want to collectively address the issue.

We all took an oath of office to support the US and Virginia Constitutions, including the constitutional right of law-abiding citizens to keep and bear arms. While the General Assembly is considering a number of pre-filed bills related to gun control in the Commonwealth, the Hampton City Council is concerned that the potential effect of some of these bills could result in the criminalization of law-abiding citizens in Hampton.

We support sensible gun legislation such as the two policy positions we presented in our legislative package. Therefore, we urge all Virginia legislators to approach gun legislation with great care and full consideration of 2nd Amendment concerns."

Resolution withdrawn: Council woman Eleanor Brown withdrew the resolution because she worries it would be misconstrued & undermine the law

In Virginia Beach Tuesday night, Councilwoman Sabrina Wooten withdrew a resolution of support for a bill that would allow localities to make their own rules when it comes to firearms in government buildings.

Prior to the withdrawal in Hampton, dozens of resolution supporters lined city council chambers, many of them taking the time to share their perspective and experience as a responsible gun owner.

They say they deserve the opportunity to protect themselves and any perspective, saying otherwise would infringe on their Second Amendment rights.

“These gun laws will not do anything to take guns out of the criminals' hands. All they’re going to do is penalize a U.S. law-abiding citizen," said citizen Jeff Brannick.

Yet, just seats away, opposing the resolution were members of the Hampton branch of the NAACP.

Members were out in strong numbers, saying the city needs sensible gun laws, not the opportunity to have more on the streets.

NAACP President Gaylene Kanoyton says there have been too many homicides in the city in the past five years.

"To advocate for guns in Hampton, it’s not really a good thing to do," she said.

After the meeting, Kanoyton said she was pleased with the outcome but wished it wasn't such a divisive process.

Unanimously, all members agreed on the decision to withdraw.

The full resolution can be read below:

There have been a number of bills pre-filed for the 2020 Virginia General Assembly session regarding proposed gun control measures. Citizens have expressed concern about the proposed legislation and asked that the City Council take action. Three members of City Council have put forward this proposed resolution for Council’s consideration. If adopted, this resolution will be provided to the City’s legislative delegation and the Governor as a supplement to the City’s 2020 Legislative Agenda.

WHEREAS, the Second Amendment of the United States Constitution guarantees that the “right of the people to keep and bear arms shall not be infringed;”

WHEREAS, the Virginia Bill of Rights, which is part of the Constitution of Virginia, also protects the “right of the people to keep and bear arms."

WHEREAS, the City Council is concerned that certain pre-filed legislation for the 2020 session of the General Assembly may threaten the rights of law-abiding citizens to keep and bear arms guaranteed by the constitutions of the Commonwealth of Virginia and of the United States;

WHEREAS, the City Council desires to express its opposition to any law that would unconstitutionally restrict the rights of law-abiding citizens of the City to keep and bear arms; and

WHEREAS, the City Council desires to act in the best interests of the residents of the City, and accordingly, the Council hereby express its sentiments with regard to this important and fundamental right;

NOW, THEREFORE, BE IT RESOLVED, BY THE CITY COUNCIL OF THE CITY OF HAMPTON, VIRGINIA THAT:

2.  The City Council hereby expresses its support for the rights of law-abiding citizens to keep and bear arms and urges the members of the General Assembly and the Governor to take no action which would violate the freedoms guaranteed by either the Virginia Bill of Rights or the federal Billl of Rights;

3. The City Council desires to supplement its 2020 Legislative Agenda to include this resolution in support of Second Amendment Rights; and

4. The City Council hereby directs the City Manager to forward a copy of this resolution to the City’s General Assembly delegation and to the Governor of Virginia.