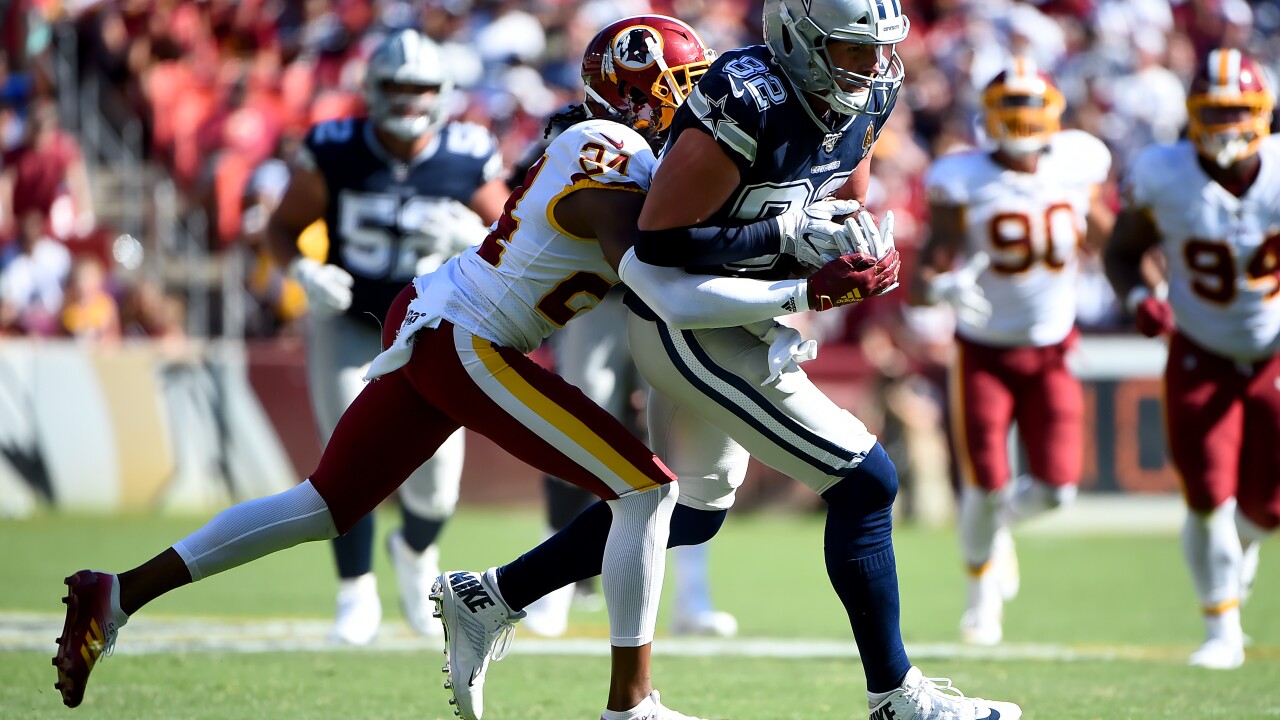 LANDOVER, MD – SEPTEMBER 15: Jason Witten #82 of the Dallas Cowboys is tackled by Josh Norman #24 of the Washington Redskins during the second half at FedExField on September 15, 2019 in Landover, Maryland. (Photo by Will Newton/Getty Images)

Quarterback Dak Prescott #4 of the Dallas Cowboys runs with the ball in second half action against the Washington Redskins . (Photo by Win McNamee/Getty Images)

LOUDOUN COUNTY, Va. – Washington Redskins (0-2) defensive coordinator Greg Manusky is on the hot seat after his defense’s poor start to the season.

The team’s looked fine early on in games, but as time goes on the defense gives up big plays, allowing 30-plus points during losses to the Dallas Cowboys and Philadelphia Eagles.

The Redskins’ defense was supposed to be the team’s strong suit this season, and in addition to surprising everyone outside of the organization, those within have been dumbfounded as well.

“Yeah [I’m surprised], I think we start off good and then all of the sudden we kind of taper off,” defensive coordinator Greg Manusky said. “Each week it’s always a different game. I always tell the guys we gotta play 60 minutes. It’s not 15 minutes, 30 minutes, 45 minutes, it’s 60 minutes and that’s the way we’ve got to play. From the start to the finish, we’ve got to play that way.”

“I’d be lying if I said I wasn’t [surprised],” cornerback Josh Norman said. “I didn’t think it would come and hit us like this. We have some tough teams that we’ve faced, but it wasn’t much better than what we are.”

The Redskins rank among the worst five teams defensively. Only the Arizona Cardinals and Miami Dolphins have worse total defense numbers than Washington.

When it comes to rushing defense, the ‘Skins are second to last after allowing 168 yards on the ground per game, followed by the Dolphins who’ve allowed 194.5 yards.

Tony Pollard #20 of the Dallas Cowboys carries the ball as Jimmy Moreland #32 of the Washington Redskins defends. (Photo by Scott Taetsch/Getty Images)

Related: Redskins in search of consistency on offense

“It’s hard in third-and-one and third-and-twos to call a pressure because the ball is coming out so quick. So, across the board we’ve got to do a better job of getting after the passer with a little bit of pressure here and there and then ultimately trying to sack the quarterback.”

They get their first crack at turning things around on Monday, when they host the Chicago Bears at home in an 8:15 p.m. matchup.