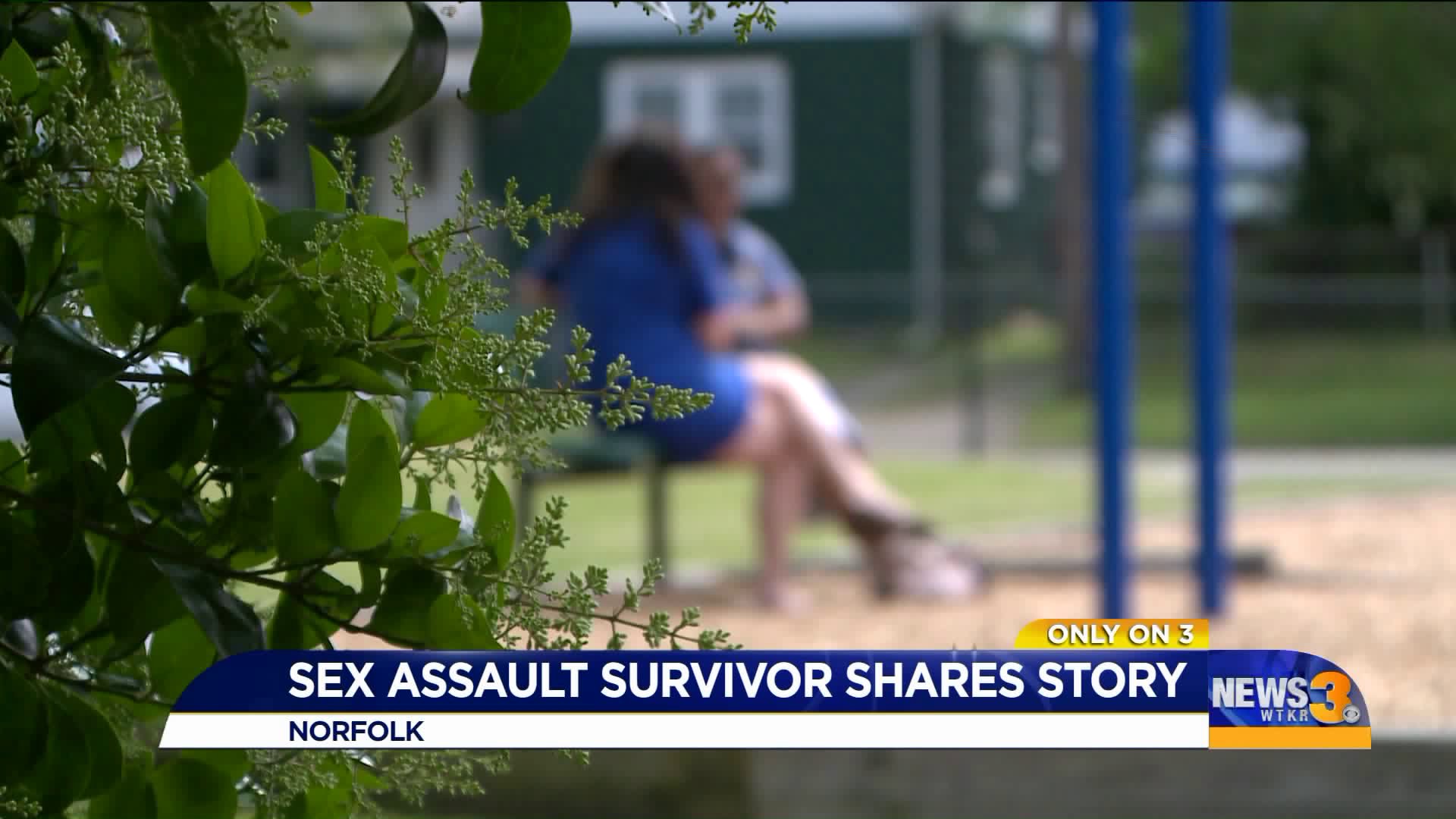 HAMPTON ROADS, Va. - A local woman says a sexual assault inside of a hotel room changed her life forever.

“He started to kiss me and I’m like, 'Man, what are you doing,'” said the woman, who didn’t want to be identified. “That’s when he grabbed me by my neck and forced me down on the bed.”

She said it happened in 2011 before they were deployed to Iraq.

She didn’t report it but said confided in a friend who confronted the attacker two months later.

News 3 reporter Margaret Kavanagh speaks to the victim, who didn't want to be identified

She said the two men got into a physical fight.

She said she was told her friend would be arrested for assault if she didn’t explain what happened to her.

“There was an investigation, if you want to call it that. They said everything was going to be confidential. Nothing was confidential,” said the woman. “I was alienated the whole time we were overseas. The whole time that I was in the National Guard, I was treated awful.”

She said her superior told her, "Nobody trusts you. Nobody believes you because you’re a liar."

She said she understands that you can't make accusations against people without an investigation and admits sexual assault cases are hard to prove.

But what she couldn't understand was the response she got from her superiors.

"What I didn’t understand was when we were in Iraq, he looked me in the eye and said that he couldn’t trust me," she said. "I wasn’t trustworthy."

A new report from 2018 just released from the Pentagon showed there were about 20,000 reports of unwanted sexual contact which covers everything from groping to rape.

“More often than not with sexual assault cases, the person who did the assaulting is going to be someone that the victim knows,” said Dejion Payne, the victim advocate for the YWCA.

The woman said the attack had a profound impact on her life.

But life is much different now. She got help, became a mom and went back to school. She said the experience has made her who she is today – stronger and tougher.

According to the report, the Department of Defense estimates 20,500 service members, representing 13,000 women and 7,500 men, experienced some kind of contact or penetrative sexual assault in 2018, up from approximately 14,900 in 2016.

It also said women between 17 and 24 years old are at the highest risk of being assaulted. In this year's findings, military women said offenders were most often military men who they considered to be a friend or acquaintance, acting alone.

The Department said it has been typical for the alleged offender to hold a similar rank to the victim or one rank higher. In this year's findings, military women said offenders were most often military men who they considered to be a friend or acquaintance, acting alone.

The Department said it has been typical for the alleged offender to hold a similar rank to the victim or one rank higher.

The sexual assaults are also said to have occurred between junior enlisted members who are peers, often working, training or living near one another.

Advocates told News 3 that can make seeking help hard. "There's different reporting options in the military, but ultimately the victim could still end up feeling like, 'everybody knows' [and carry a large amount of shame around]."

A similar report into the abuse was done in 2016. Since then, sexual assaults for both men and women - in every branch - increased significantly but most notably in the Marine Corps. The branch stands at 10.7% of assaults on women when just two years ago it was reported at 7%.

Marine Corps Commander Gen. Robert Neller posted to Twitter on Thursday and said, "When this crime is committed, Commanders will continue to thoroughly investigate, support the victims, and prosecute the perpetrators... I expect all Marines at all levels to combat this criminal behavior. We are better than this. Keep your honor clean."

There are options to receive help, though, both within the military and outside of it.

Each command has a SAPR (Sexual Assault Prevention and Response) that is available 24 hours a day, 365 days a year to talk with service members and record allegations of sexual assault.

Military members can also seek civilian services if they want. Payne said the YWCA in Norfolk is open to anyone and services are completely confidential.

"If they call our hotline and they request for services from the YWCA, we are not required to report whatever services we've provided them to anyone," she said.

The Sexual Assault Accountability and Investigation Task Force is designed to identify, evaluate and recommend immediate actions to improve the accountability process when reporting sexual assaults.

If you or anyone you know is experiencing sexual assault, you can call the YWCA anytime at 757-251-0144 or contact your command SAPR.