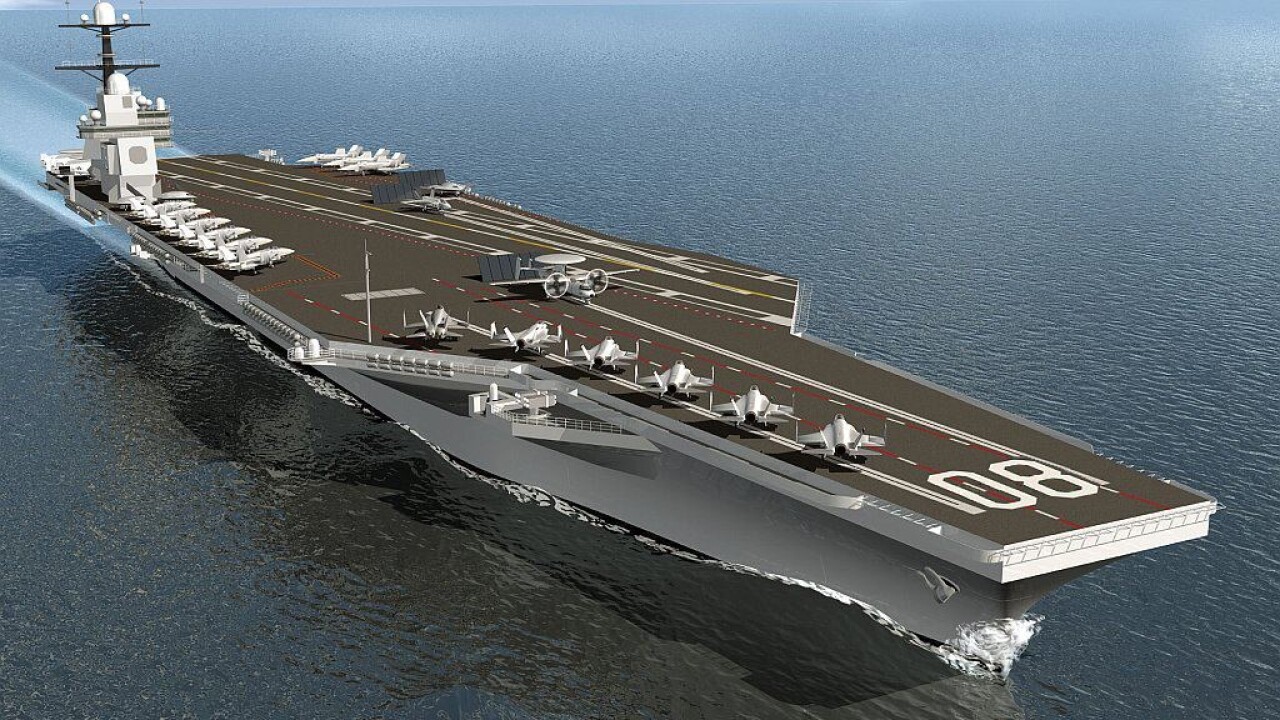 This is the first time this has happened in more than 30 years.

The company announced that it received a contract modification valued at $15.2 billion for the detail design and construction of the Gerald R. Ford-class aircraft carriers Enterprise (CVN 80) and CVN 81, which has not yet been named.

The Navy announced its intent to block buy two carriers in early January.

This historic contract award is a significant step toward the company’s designing and building the next-generation of aircraft carriers at the best value for the United States. It is a defining moment in the history of the sole builder of the nuclear-powered aircraft carriers.

The U.S. Navy’s decision to partner with Huntington Ingalls to create the best acquisition approach will save more than $4 billion across the program.

“Today’s announcement is a triumphant step toward returning to a 12-ship aircraft carrier fleet and building the 355-ship Navy our nation needs,” said Jennifer Boykin, president of Newport Shipbuilding. “Most importantly for us, it provides stability into the year 2032 for our workforce and for our supplier businesses across the United States.”

Virginia Senators Mark Warner and Tim Kaine, both Democrats, released the following statement after the announcement:

A big congratulations is due to the Navy and Huntington Ingalls Industries for finalizing a deal that will save 4 billion in taxpayer dollars and help keep the country safe,” Senators Warner and Kaine said. “Virginia’s shipbuilders make the finest carriers in the world, and we have long pushed the Navy to make this smart investment by block buying the newest class of ships. We are also glad that this move will help provide stability for the Hampton Roads defense community, ensuring that the shipyards can maintain the workforce they will need to help us reach the Navy’s goal of a 355-ship fleet.

Warner and Kaine have long supported the block buying of aircraft carriers. As a member of the Senate Armed Services Committee, Kaine championed the language that was included in the annual defense bill to allow for a block buy.

Both senators supported this effort in funding bills and discussed the benefits with military leadership.

The construction of the Enterprise began – which began in 2017 – and CVN 81 will be completed at the company’s Newport News Shipbuilding division. The ships are scheduled to be delivered in 2028 and 2032, respectively.

Buying two aircraft carriers will stimulate Newport News’ aircraft carrier supplier base of more than 2,000 suppliers in 46 states, allowing businesses to phase in work more efficiently. These benefits will help accelerate production, which will allow the company to build aircraft carriers every three to four years.

To support the contract, the company is investing in facilities and will continue its digital transformation efforts.

“This contract award is something we should celebrate, and it is also something we should never take for granted,” Boykin said. “We have the responsibility to leverage the investments we are making in our workforce, the facility and in digital shipbuilding to become smarter, better, stronger. It is more important than ever that we execute efficiently and transform our business operations so that we leave a lasting legacy of our own.”

The strategy comes as a result of extensive collaboration with the Navy to reduce cost and drive efficiencies, but the approach is not new. The Navy achieved substantial cost savings in the 1980s when it used the procurement strategy to purchase the Nimitz-class aircraft carriers USS John C. Stennis (CVN 74), USS Harry S. Truman (CVN 75), USS Abraham Lincoln (CVN 72) and USS George Washington (CVN 73).

The four ships were built by Newport News.

This contract modification comes after previous contract awards for the advance procurement and advance fabrication of Enterprise, starting in May 2016.

“History has its eyes on Newport News Shipbuilding, and today is a great reminder that we are all part of something much greater than ourselves,” Boykin said. “I could not be more proud of our shipbuilders and excited for our future.”