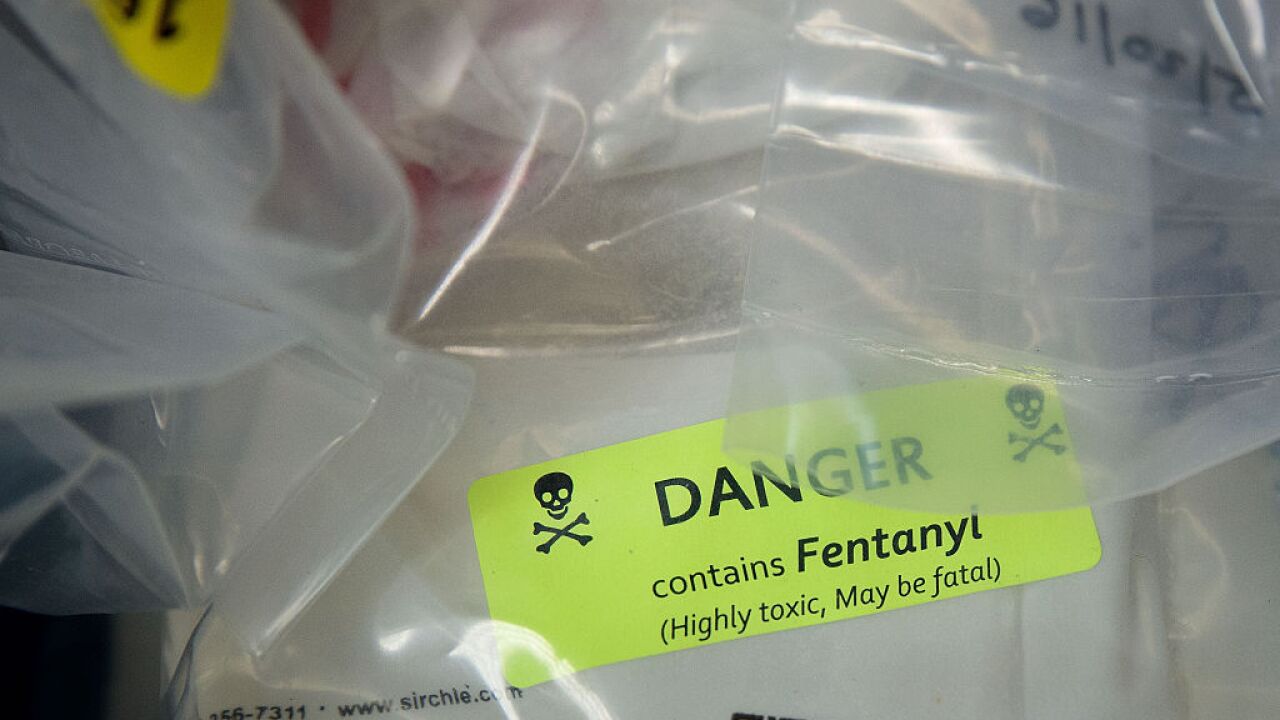 NEW YORK, NEW YORK – SEPTEMBER 23: Bags of heroin, some laced with fentanyl, are displayed before a press conference regarding a major drug bust, at the office of the New York Attorney General, September 23, 2016 in New York City. New York State Attorney General Eric Scheiderman’s office announced Friday that authorities in New York state have made a record drug bust, seizing 33 kilograms of heroin and 2 kilograms of fentanyl. According to the attorney general’s office, it is the largest seizure in the 46 year history of New York’s Organized Crime Task Force. Twenty-five peopole living in New York, Massachusetts, Pennsylvania, Arizona and New Jersey have been indicted in connection with the case. (Photo by Drew Angerer/Getty Images)

From 2015 to 2016, more than twice as many drugs seized by law enforcement agencies and submitted to labs have tested positive for fentanyl, in what appears to be an escalating trend.

The National Forensic Laboratory Information System (NFLIS), a program of the DEA, points to a drastic surge of lab submissions that tested positive for fentanyl — going from 15,209 in 2015 to 31,700 in 2016.

In addition, lab testing of fentanyl analogues — drugs with close structural resemblance and similar effects to fentanyl — went from 2,230 in 2015 to 4,782 in 2016.

“Drug use today has become a game of Russian roulette. There’s no such thing as a safe batch, this is the opioid crisis at its worst,” DEA spokesman Rusty Payne told CNN.

Fentanyl, a synthetic opioid typically prescribed to treat patients with severe pain, is approximately 50 times more potent than heroin and 100 times more powerful than morphine, according to the NFLIS.

Last year, the country lost more than 52,000 Americans to drug overdose — more than 33,000 of those from opioids, according to the Centers of Disease Control and Prevention. It means more people die from opioid-related causes than from gun homicides and traffic fatalities — combined, the DEA states.

Fentanyl reports remained fairly steady between 2003-2013, until sharp increases occurred beginning in 2014 through 2016, particularly noticeable in the Northeast and Midwest.

“Drug addicts know they are taking fentanyl at times, and know it can kill them, but are willing to take the risk,” Payne said, adding that Chinese labs that manufacture the substances are trying to stay ahead of law enforcement using chemistry advances, tweaking the chemical structure to create a slightly different analogue.

Payne also pointed at “a tremendous opioid demand in this country” that pushes Mexican drug cartels to add pure fentanyl to heroin batches, creating hundreds of thousands of dosage units. According to DEA reports, Mexico continues to supply up to 85-90% of the domestic heroin market.

The DEA is working hard on education, enforcement and prevention to battle the crisis, Payne said, but added it is a vicious cycle that is eventually up to the community to end. “The next generation has to be better. We need to make sure people don’t ever start,” he said.