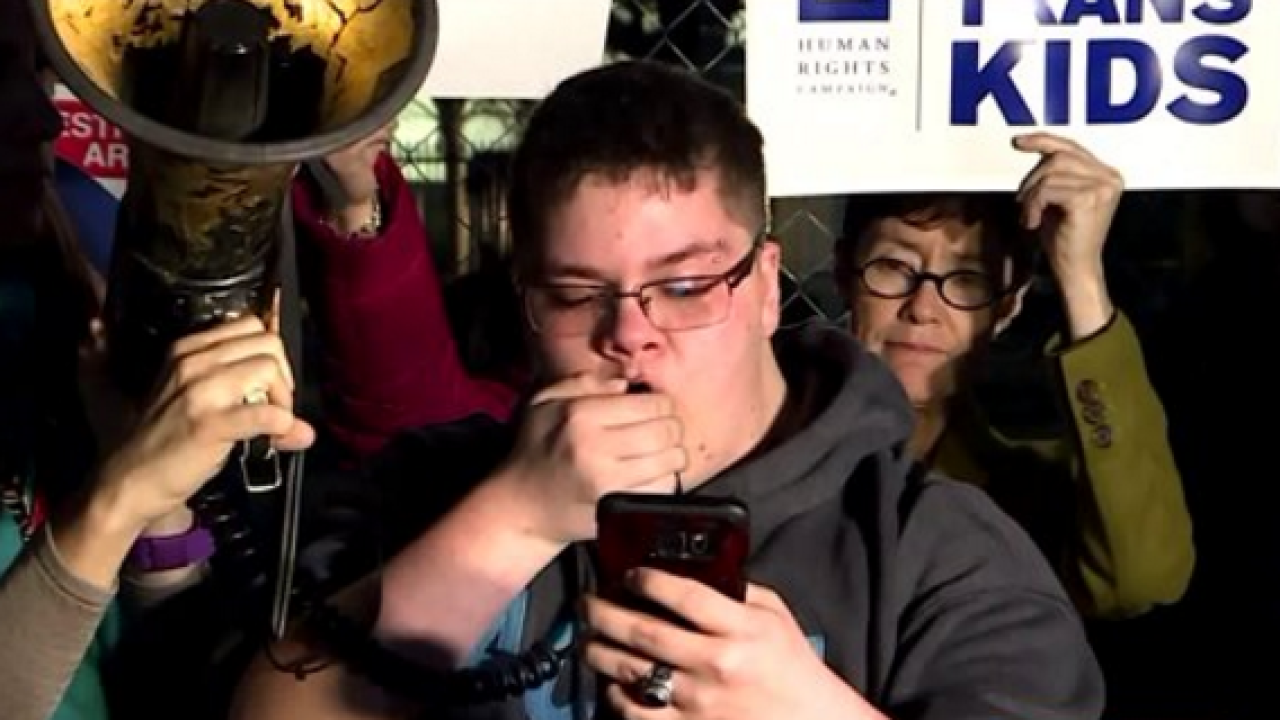 Lawyers for Gavin Grimm, a transgender teen who is barred from using the boys’ bathroom at his Gloucester high school, told the Supreme Court Thursday that his challenge to the school board policy should go forward, arguing that the restrooms “must be equally available to all boys and all girls, including boys and girls who are transgender.”

The filing comes the day after the Trump administration withdrew Obama-era guidance on transgender bathroom use in public schools. That guidance issued last May articulated that Title IX — a federal law that prohibits discrimination on the basis of sex in federally funded education programs — includes discrimination based on gender identity.

The Supreme Court is scheduled to hear arguments in Grimm’s case on March 28 and legal experts question whether the justices could decide to use the Trump administration’s move to dodge a ruling on the merits. A lower court had deferred to the Obama administration’s when it ruled in favor of Grimm.

“The withdrawal of the guidance only impacts one of the questions in the case — whether the Obama administration’s guidance was valid. Even without it, the larger question, whether transgender discrimination should be treated as sex discrimination under federal statutes, remains,” said Steve Vladeck, a CNN contributor and professor at the University of Texas School of Law.

Joshua Block, an ACLU lawyer representing Grimm, argued in court papers that the justices should still hear and decide the remaining question in the case.

“Under the plain text of Title IX, Gavin has stated a claim on which relief can be granted,” Block argued.

“Under the Board’s policy, Gavin is subjected to discrimination at, excluded from participation in, and denied the benefits of Gloucester High School on the basis of sex,” Block wrote.

“Gavin simply asks the court to apply the statute as written,” he said.

“If the Supreme Court holds that Title IX protects against sex discrimination by guaranteeing bathroom access based on a person’s gender identity, that would strike down the school’s policy that did not permit Gavin to use the boys’ facilities,” said Kari E. Hong, a professor at Boston College Law School.

S. Kyle Duncan, a lawyer for the Gloucester County School Board issued a statement Wednesday night saying the board was “pleased ” that the Trump administration withdrew the Obama administration’s guidance.

He said he looked forward to “explaining to the Supreme Court why this development underscores that the board’s commonsense restroom and locker room policy is legal under federal law.”

In briefs Duncan has argued that the the lower court opinion, if left to stand, would “upend the ingrained practices of nearly every school in the nation on a matter of basic privacy and dignity –whether separate restrooms, locker rooms, and showers may be provided for boys and girls, as defined by their physical sexual attributes.”

He said that “no one imagined” that Title IX would be used to “erase all distinctions between men and women, nor dismantle expectations of privacy between the sexes.”

After oral arguments the justices will hold a private conference. If they are closely divided they could decide to hold the case for re-argument once there is a ninth justice. Among other possibilities they could also vacate the lower court decision and send the case back down for further proceedings. If they ruled in favor of Grimm, however, they could change the landscape of transgender law.

“A ruling in favor of the plaintiff would hard-wire into the federal statute the conclusion that transgender discrimination is tantamount to sex discrimination, and could only be changed by Congress, not the President. That could have consequences far beyond public schools — and this presidency,” Vladeck said.