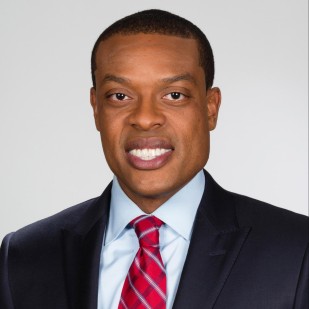 If there’s one thing that most people want to know about Dominic, it’s about his name. It looks simple, right? Well, don’t let the spelling fool you. It’s a family name. In fact, Dominic was named after his dad. The best way to remember how to say Dominic is to think of Dennis “The Menace.” Really! You’ll have it in no time!

Dominic is from the Peach State, born and reared in suburban Atlanta in a town called Locust Grove. For as long as Dominic can remember, weather has always been in him. In fact, as a kid, he loved telling people about the weather and giving his own forecasts to family and friends. It was always his childhood dream to do the weather, even before he knew how to spell meteorologist!

Dominic began his career at WCTI-TV NewsChannel 12 in Eastern North Carolina. He was the first black meteorologist in that station’s history as well. Dominic spent more than four years as weekend meteorologist/weekday reporter, forecasting and being on the front line of several major weather events, including Hurricane Irene in 2011 and one of the worst tornado outbreaks in the state’s history on April 16 that same year.

Before arriving in North Carolina, Dominic spent two years in Starkville, Mississippi. That’s where he received his Master of Science in Geosciences/Broadcast Meteorology from Mississippi State University. While there, Dominic was a graduate teaching assistant in the Department of Communication. He also had the opportunity to get a taste of all kinds of severe weather while chasing storms in Mississippi and all over the Great Plains. He also had a chance to witness firsthand the destruction caused by Hurricanes Katrina and Rita in 2005. Before arriving at MSU, Dominic received his Bachelor’s degree in Broadcast News from the Grady College of Journalism and Mass Communication at the University of Georgia.

While in school, Dominic interned at WSB-TV in Atlanta and WCBS-TV in New York. Dominic is a member of the Hampton Roads Black Media Professionals, the National Association of Black Journalists, the National Weather Association and the American Meteorological Society (AMS). In fact, he is honored to hold the prestigious AMS Television Seal of Approval. Dominic is also a proud member of Kappa Alpha Psi Fraternity, Inc.

When Dominic is not working, he enjoys spending time with his family, friends and frat brothers, going to the movies, working out, watching sports, and cheering on his Georgia and Mississippi State Bulldogs.