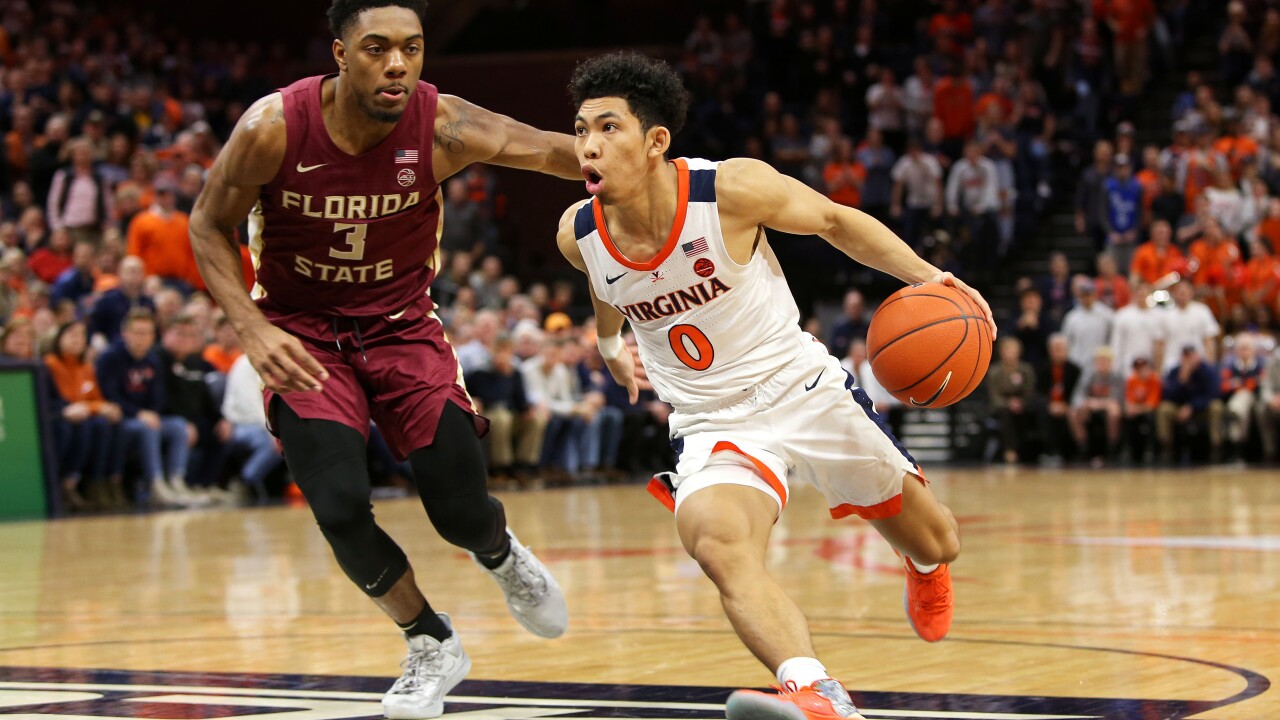 CHARLOTTESVILLE, VA – JANUARY 28: Kihei Clark #0 of the the Virginia Cavaliers drives past Trent Forrest #3 of the the Florida State Seminoles in the second half during a game at John Paul Jones Arena on January 28, 2020 in Charlottesville, Virginia. (Photo by Ryan M. Kelly/Getty Images)

Braxton Key #42 of the the Virginia Cavaliers shoots between Anthony Polite #2 and Malik Osborne #10 of the the Florida State Seminoles. (Photo by Ryan M. Kelly/Getty Images)

Mamadi Diakite had 19 points and nine rebounds for Virginia, which has won two straight after losing four of its previous five. That stretch raised questions about whether the defending national champions would even make the NCAA Tournament this year.

The game was tied 11 times and neither team could get any separation over the final 10 minutes. Virginia trailed 56-55 before Clark drove down the left side of the lane, reached across and banked his shot in on the right side. After Devin Vassell missed a jumper for the Seminoles, Mamadi Diakite hit a pair of free throws with 13.9 seconds left for Virginia (14-6, 6-4 Atlantic Coast Conference).

The Seminoles (17-3, 7-2) had two chances to tie it, but Wyatt Wilkes missed badly on a 3-point try from the top of the key and Trent Forrest also missed from the left corner. Braxton Key added a pair of free throws for Virginia.

Vassell led Florida State with 17 points. The loss was the Seminoles’ first since Dec. 3 at Indiana.

Key added 13 points and nine boards for Virginia, which snapped a two-game slide against the Seminoles and split the season series.

Mamadi Diakite #25 of the the Virginia Cavaliers. (Photo by Ryan M. Kelly/Getty Images)

Florida St.: Besides the overall winning streak, the Seminoles arrived at Virginia with an even more impressive one: they’d won nine consecutive overtime games overall, and 10 straight against ACC foes. All of the overtime contests in the streak have come against Power Five opponents.

Virginia: Coming off a seven 3-pointer performance in a victory at Wake Forest, Tomas Woldetensae caused a stir in the crowd with two first-half 3-pointers. Moments after his second 3, however, Woldetensae was whistled for his second personal foul and went to the bench with nearly nine minutes left in the half.

The Seminoles remain on the road, and in Virginia, playing at Virginia Tech on Saturday.