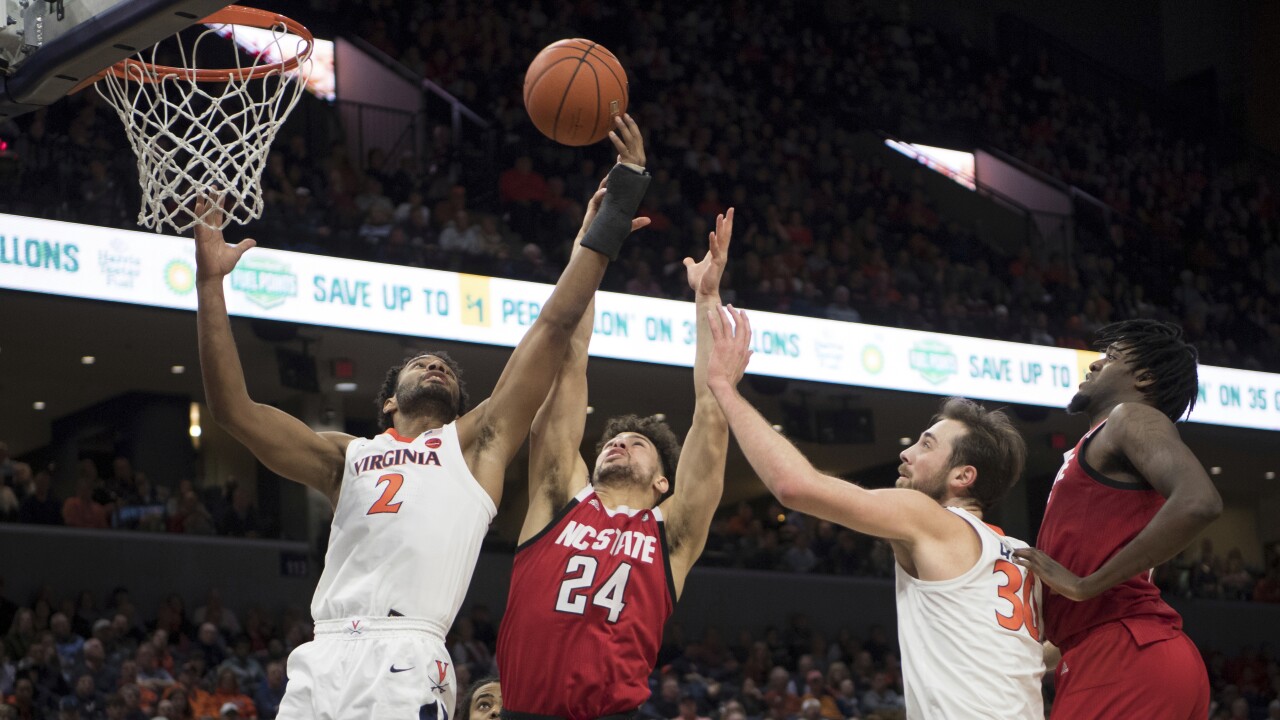 CHARLOTTESVILLE, Va. (AP) — North Carolina State took a page from the book Virginia used to win a national championship last season and used it against the Cavaliers.

The Wolfpack overcame a second-half drought of more than 10 minutes on Monday night and recovered just in time for a 53-51 victory over the Cavaliers.

D.J. Funderburk scored 14 points before fouling out and C.J. Bryce added 13 points for N.C. State (14-5, 5-3 Atlantic Coast Conference), including a jumper with 27 seconds left after allowing the shot clock to race to near 0:00. The victory ended an eight-game losing streak against the Cavaliers.

“This is the second game in a row where I thought our guys stepped up and won the game on the defensive end,” Wolfpack coach Kevin Keatts said.

“We were stuck at 42 for the longest time,” Johnson said of the drought that lasted from a basket with 13:51 left until Jericole Hellems’ 3-pointer with 3:38 left. “I just tried to do whatever I could to get the lead and then C.J. hit a great shot and took it from there.”

“We did a really good job of keeping our composure and staying patient and it worked out for us.” Bryce said.

Virginia (12-6, 4-4) had used a 15-0 run during the N.C. State drought that lasted 10:13 to take a 46-42 lead, bringing the crowd at John Paul Jones Arena back into the game. Hellems’ 3-pointer ended N.C. State’ skid, and, after a free throw by Mamadi Diakite for Virginia, Johnson hit a 3-pointer and then Hellems followed two Virginia misses with a putback that gave the Wolfpack a 50-47 lead.

Johnson and Bryce both missed the front end of one-and-one free throw opportunities, and Kihei Clark hit a pair for Virginia. Braxton Beverly made the first and missed the second for the Wolfpack with 7.2 seconds left, and the Cavaliers Casey Morsell was short on a contested 3 at the buzzer.

“They made a couple plays,. That’s what you have to do down the stretch to win,” Virginia coach Tony Bennett said after his team’s third home loss of the season, which is more than the two they had the last two seasons combined.

The Wolfpack had used an 8-0 run to go ahead 42-31. Virginia helped out by going scoreless for more than 6 1/2 minutes. Francisco Caffaro, who had just been inserted into the game, ended the drought with 11:13 left, sparking Virginia’s run.

N.C. State: The Wolfpack seemed on their way to a solid victory until the drought, during which they were 1 for 8 from the field with five turnovers and repeatedly let the shot clock run down into single digits, forcing bad shots. … NC State also played without 6-foot-11 ACC shot-blocking leader Manny Bates (2.94), who is in the concussion protocol, and forward Pat Andree (ankle). Keatts said he didn’t know is Bates will be available come Saturday.

Virginia: In the Cavaliers’ continuing search for scoring help, freshman Casey Morsell had as many as three field goals for the first time since a 65-56 victory against Navy on Dec. 29. He was 4 for 20 from the field in his last five games. He finished the night 4 for 9 and his buzzer-beater attempt was closely guarded. Morsell said he was trying to get the ball to Clark but when he couldn’t find him quickly, “time was ticking so I had to let it go.”

The Wolfpack remains on the road and plays at Georgia Tech on Saturday.

The Cavaliers go on the road and play at Wake Forest on Sunday.