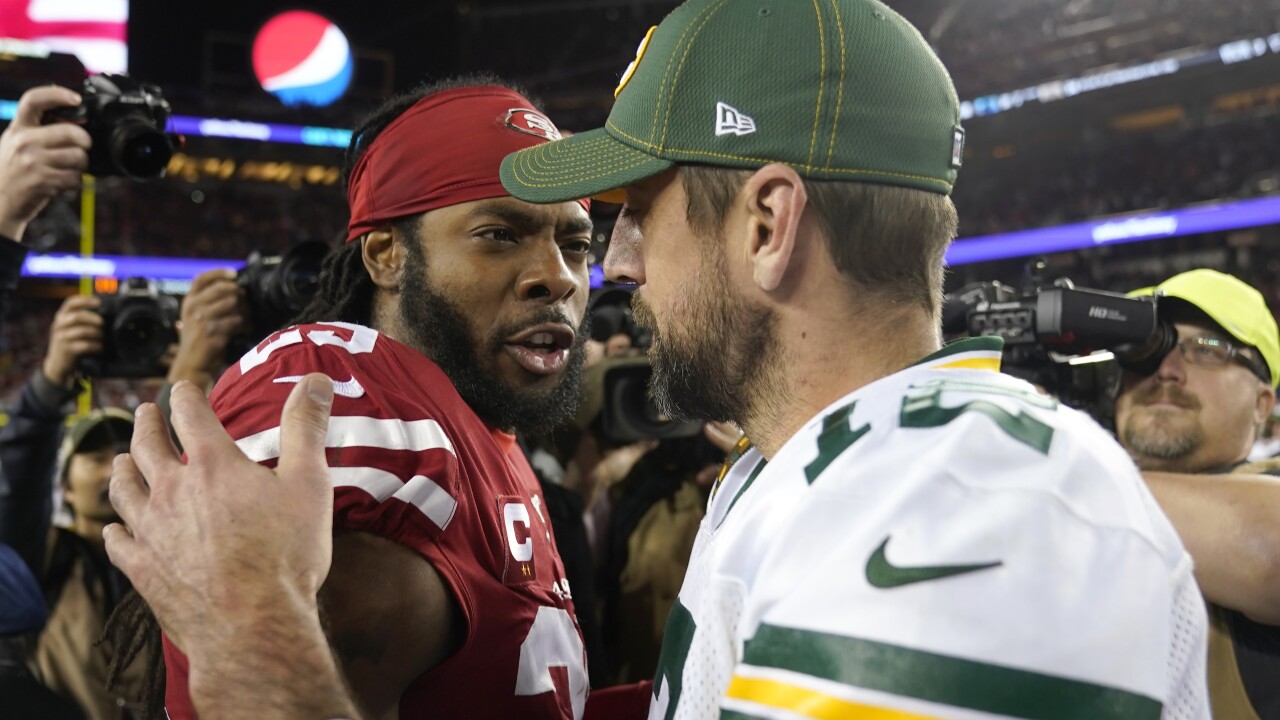 SANTA CLARA, Calif. (AP) — Nine years into his career and a little more than two years removed from a debilitating torn Achilles injury, Richard Sherman is still tormenting quarterbacks on a weekly basis.

Sherman had his third career playoff interception last week in a victory over Cousins and the Minnesota Vikings that has sent the San Francisco 49ers into the NFC championship game against the Green Bay Packers.

Waiting for Sherman will be the same quarterback he faced the last time he made it to the conference title game five years ago in Aaron Rodgers for the latest matchup between two of the NFL’s best who have nothing but respect for each other.

“He’s a talented player. In my opinion, never lost it,” said Rodgers, who was intercepted by Sherman in that loss in the NFC title game following the 2014 season.

“I mean there was never a time where you are playing him where you were thinking, ‘Oh, I am going to go after this guy.’ I always think you have to be smart about what routes you like to throw on him and understand that he’s one of the headiest players that has ever played that position, so you’ve got to be real smart about the types of routes you are liking on that side of the field.”

Sherman once again looks like the same player he was during his heyday in Seattle when he repeatedly erased receivers from the game plan by shutting down nearly half of the field with his lock-down coverage.

In his past 13 games, Sherman has allowed only 17 catches for 130 yards with two interceptions and no touchdowns, according to Pro Football Focus.

Sherman also sounds like the same one as well, with his brash talk and extreme confidence that has helped a former fifth-round pick develop into one of the top cornerbacks to play the game.

“Since I got in the league, every category that matters to a corner, I’m No. 1 in: Completion percentages, interceptions, touchdowns against, yards, passer rating,” he said. “If that was any other corner, it wouldn’t even be a conversation. But I just get tired of it. In the playoffs, I played in 13 games now, zero touchdowns given up, three interceptions. Like, show me somebody else doing it like that. Then I’ll enjoy the argument. But there isn’t.”

While Sherman uses any slights, real or perceived, as fuel, there’s only praise and respect between Sherman and Rodgers.

The two split their previous eight meetings, although Sherman came out ahead in the most important one when Seattle beat Green Bay in the NFC title game in January 2015.

But any success Rodgers had didn’t come because he found some weakness in Sherman’s game. Instead, he approached it as most quarterbacks do, throwing as few passes to his right as possible, knowing Sherman will shut down that side of the field.

Rodgers has completed only 13 passes for 138 yards against Sherman in those eight games, according to SportRadar, targeting him just 23 times and throwing one interception in that NFC championship game.

Much of that production came in the first meeting in 2012 when Rodgers went 4-for-5 for 44 yards. He has avoided him almost completely since then as Sherman has allowed just nine catches for 94 yards in the past seven games.

“I’d say it’s been intense,” Sherman said of those matchups. “It’s been very competitive, I guess, for lack of better words. We’ve played quite a few times, and the games are always good. There’s rarely any blowouts one way or another. But it’s always a chess match with him, and you’ve got to pick your spots carefully.”

Sherman’s spot figures to be on the left side of San Francisco’s defense where he usually locks down whomever lines up against him.

The Packers having a clear No. 1 receiver in Davante Adams, whose 83 catches in the regular season were more than twice as many as any other wideout on Green Bay even though Adams missed four games with a toe injury. He had a franchise playoff record 160 yards receiving last week against Seattle, raising questions about whether the Niners will change philosophy and have Sherman follow Adams.

Sherman has lined up on the defensive right side on only 14 snaps in two seasons with San Francisco and said the last time he remembers trailing a receiver was probably in 2016 against Atlanta’s Julio Jones.

It hasn’t hurt the Niners, who allowed the fewest yards passing in 10 seasons.