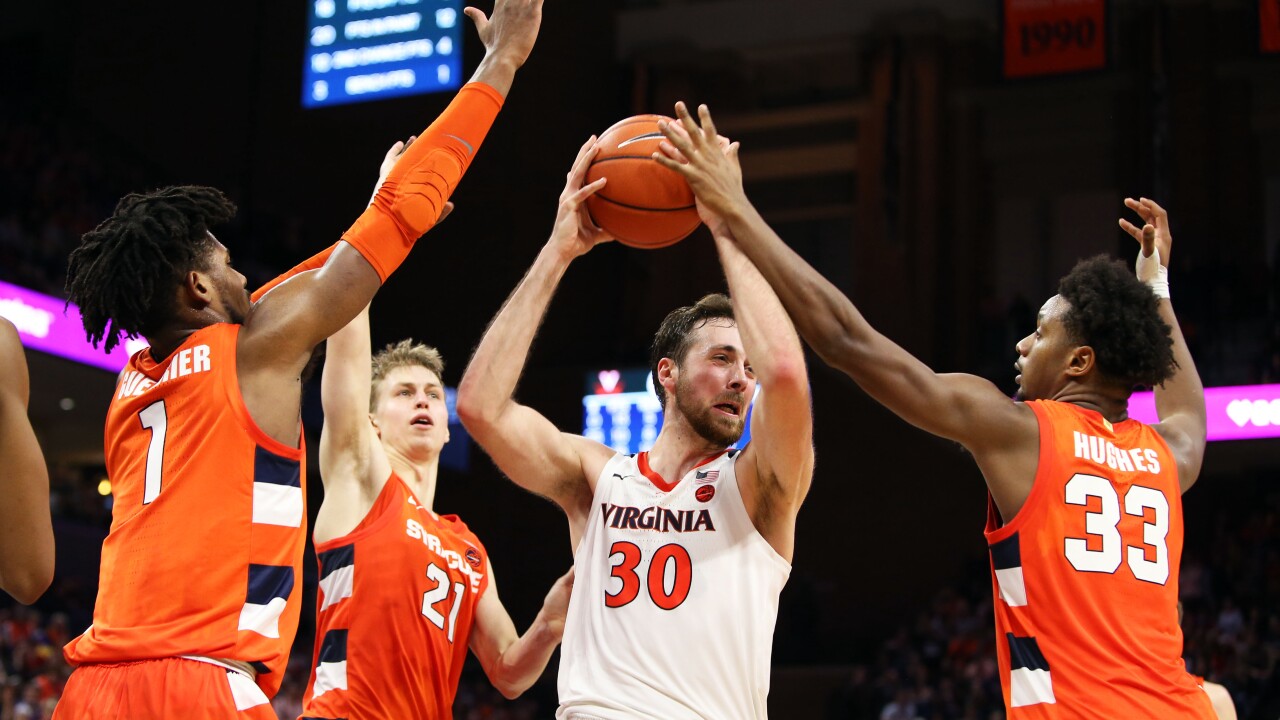 CHARLOTTESVILLE, VA – JANUARY 11: Quincy Guerrier #1, Marek Dolezaj #21 and Elijah Hughes #33 of the Syracuse Orange trap Jay Huff #30 of the Virginia Cavaliers under the basket in overtime during a game at John Paul Jones Arena on January 11, 2020 in Charlottesville, Virginia. (Photo by Ryan M. Kelly/Getty Images)

Virginia trailed by eight early in the second half but used a 15-2 run to go ahead 35-30 with 12:03 to play. The teams traded points down the stretch to go to overtime.

Jay Huff led Virginia with 16 points and 10 rebounds for his second double-double of the season. Clark and Mamadi Diakite each finished with 13 points.

Virginia shot 31 percent from the field, while Syracuse shot 33 percent. UVA shot 50 percent in overtime, but the Orange was 5-for-6 from beyond the arc and shot 85.7 percent.

HOW IT HAPPENED
Virginia scored first with a Huff layup. Clark added a three as the teams traded baskets early. It was tied 11-11 when Syracuse hit back-to-back three-pointers and eventually took a 24-20 lead into the half.

The Orange scored two-straight layups to begin the second half and lead 28-20. Virginia then used its 15-3 run to take the lead. Syracuse responded with a 6-0 run to go back ahead with 5:13 to play. The teams battled back and forth, with Clark hitting two free throws to send it to overtime. Diakite hit a layup to start overtime, but Syracuse hit three-straight threes to go ahead 52-45. Syracuse continued to hit threes and took the win with a 20-12 advantage in overtime.

NOTES
• UVA shot a season-low 31.3 percent (21 of 67) from the floor
• UVA matched a season-high with 47 rebounds (47 at Syracuse in season-opener)
• Huff recorded his second career double-double with a career-high tying 16 points and 10 rebounds
• Huff recorded his first double-double in the season-opener at Syracuse
• Key tied a career high with 11 rebounds
• Clark had a game-high nine assists

UP NEXT
Virginia is back on the road in ACC play on Wednesday, Jan. 15 at Florida State.