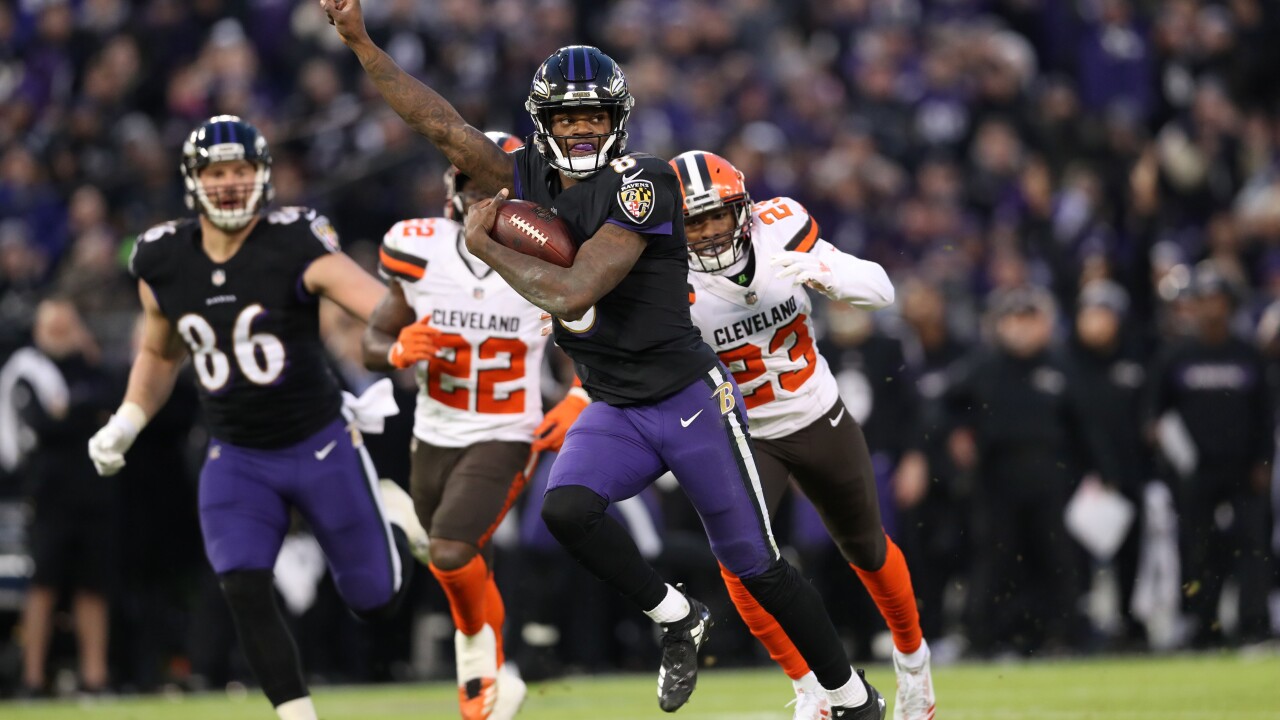 Lamar Jackson celebrates before getting in the end zone. (Photo by Rob Carr/Getty Images)

BALTIMORE, Md. (AP) — Containing Lamar Jackson has been virtually impossible for opposing defenses this season, and now the task falls on the Tennessee Titans to find a way to slow down a versatile quarterback who is equally adept at running the ball and throwing downfield.

“Other than try to tie his shoelaces together, not many people have had success,” Titans coach Mike Vrabel acknowledged.

The top-seeded Baltimore Ravens (14-2) bring a 12-game winning streak and the most productive offense in the NFL into Saturday’s AFC playoff game against the Titans (10-7), who advanced by beating New England 20-13 last week.

Tennessee’s hope of pulling off another upset rests upon keeping Jackson in check. The 2016 Heisman Trophy winner has become an unstoppable force in his second NFL season, running for 1,206 yards — most by a quarterback in NFL history — and tossing 36 touchdown passes.

Jackson is the main component on a team that ranked No. 1 with 531 points and set an NFL record with 3,296 yards rushing. Asked if he had ever seen a club run the ball so effectively, Vrabel replied: “Not in this league. It’s ridiculous. I just did the math; it took me a while.”

The Titans have solid running game, too. Derrick Henry, the NFL’s leading rusher, is a 6-foot-3, 247-pound bruiser who throttled the Patriots for 182 yards on the ground.

“He’s like one of those guys that the kids create on Madden. You shouldn’t be that big and be able to run like he runs,” Ravens defensive coordinator Don Martindale said. “Obviously, we’re going to have to bring our lunch pail, work hat and just go play football with him.”

Baltimore’s defense has no intention of backing down.

“Guys didn’t seem like they were too interested in tackling him,” Ravens safety Earl Thomas said of the Patriots. “Our mindset is a little different. We’re going to tackle him and try to swarm.”

Tennessee’s offense has flourished since Ryan Tannehill took over for struggling Marcus Mariota in Week 7. He has thrown at least one touchdown pass in 11 straight starts, and over the final 10 games of the regular season accounted for 26 total touchdowns — 22 through the air and four on the ground. Only Jackson, with 30, had more over that span.

The Ravens are the NFL’s No. 3 scoring defense, allowing 17.6 points a game. The Titans finished the regular season 12th, giving up 20.7 points a game under former Baltimore defensive coordinator Dean Pees.

But in the last two games, including a must-win finale against Houston, Tennessee yielded just 27 points.

Henry has been on quite a run over his past seven games, averaging 154 yards and piling up 1,078 yards. Against New England, the 2015 Heisman Trophy winner accounted for 75% of Tennessee’s offensive production — including a 22-yard pickup off a screen.

If Henry runs for 180 yards against the Ravens, he would become the first player since 1970 to have at least 180 yards in three straight games in either the regular season or postseason.

Last year, however, he was limited to 21 yards over seven carries in Tennessee’s 21-0 loss to Baltimore.

The Ravens appear to have a huge edge in the kicking game. Justin Tucker went 28 for 29 on field goal tries this season and Titans kicker Greg Joseph has yet to attempt a 3-pointer.

Joseph has played in three games since being signed in December after Ryan Succop was placed on injured reserve.

Tucker is the most accurate kicker in NFL history, converting 90.8% of his FG attempts. One reason behind his success is that he’s been working with long snapper Morgan Cox and holder Sam Koch since 2012.

“That gives me peace of mind going into each and every field goal,” Tucker said.

In his postseason debut last season, Jackson got off to a rocky start as the Los Angeles Chargers bolted to a 20-point lead in a 23-17 victory.

Jackson expects things to go differently the second time around.

“Can’t start too late. You have to attack fast,” he said.

That’s been precisely how the Ravens have played all season, outscoring their opponents 128-31 in the first quarter. More often than not, the opposition doesn’t know how quick Jackson is until it actually sees him on the field.

“My guess is that speed looks a lot different during the game than what it did in practice,” said Vrabel, who had Mariota playing the role of Jackson for the scout team this week.

US AGAINST THE WORLD

No matter where they are or who they play, the Titans always seems to find fans rooting against them. That’s sure to happen against the Ravens, who have some of the loudest fans in the NFL.

“I would imagine we’re the underdogs every week,” Vrabel said. “You go to our games, there’s 20,000 of the other team’s fans. I just coach the team, try to get them ready. Some days it’s good enough, and some days it’s not good enough.”