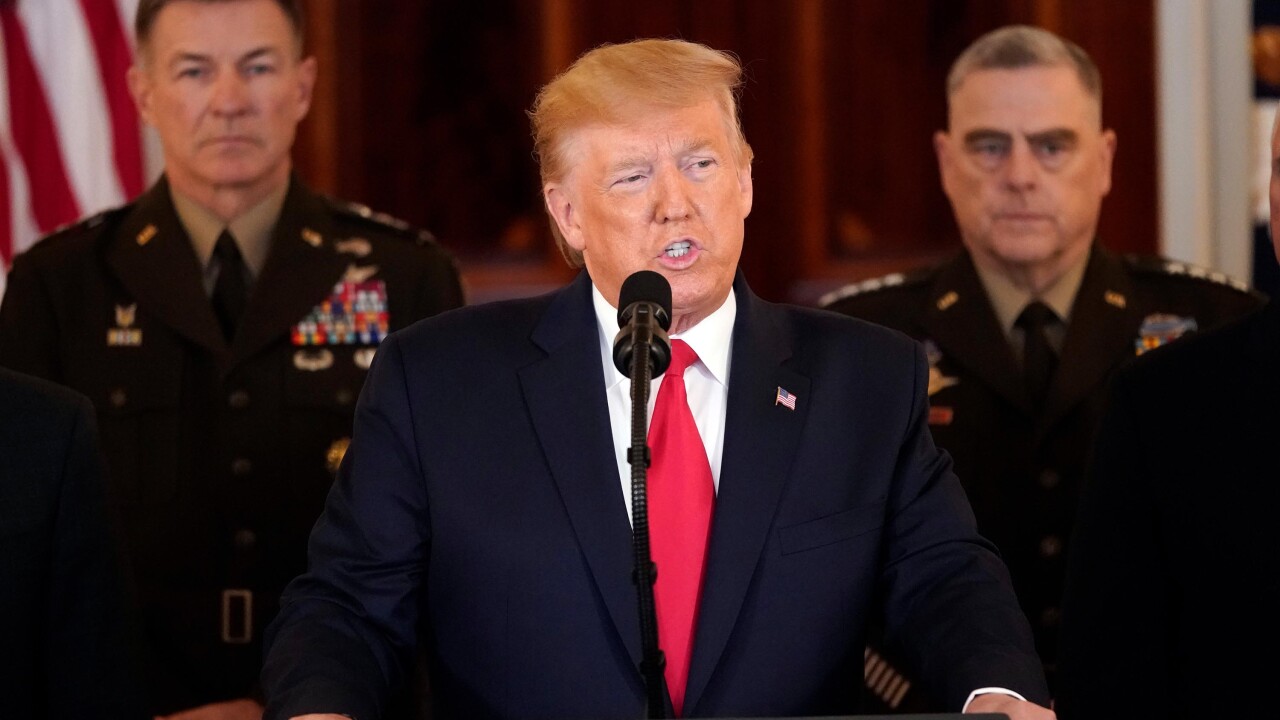 On the same night the US military killed Iranian commander Qasem Soleimani, they unsuccessfully targeted another senior Iranian military official in Yemen, according to a US official with knowledge of the events and another source familiar.

The sources would not give any details about the mission or how the US had attempted to carry it out. The US official said to the best of their knowledge there is no broader operation to decapitate the Islamic Revolutionary Guards Corps-Quds force leadership at this time.

In a statement to CNN, Pentagon spokeswoman Cmdr. Rebecca Rebarich acknowledged seeing the report but declined to offer any additional information.

“We have seen the report of a January 2 airstrike in Yemen, which is long-understood as a safe space for terrorists and other adversaries to the United States. The Department of Defense does not discuss alleged operations in the region,” said Pentagon spokeswoman Cmdr. Rebecca Rebarich in a statement.

Despite the Pentagon’s assertion, the Department of Defense and US Central Command have routinely issued on-the-record statements about US strikes in Yemen.

The Washington Post was first to report the operation took place.

According to the Post, the Iranian target was Abdul Reza Shahlai, a financier and key commander of Iran’s Quds Force which is an elite wing of the Iranian military operating throughout the Middle East.

In December, State Department Special Representative for Iran Brian Hook announced the administration was offering “up to $15 million for information on the financial activities, networks, and associates of Abdul Reza Shahlai.”

News of an additional operation comes as top US national security officials continue to defend the Trump administration’s claim that it killed Soleimani in response to an impending threat to American lives, but the lack of evidence provided to lawmakers and the public has fueled lingering skepticism about whether the strike was justified.

The new development is already raising more questions about the administration’s explanation for killing Soleimani.

“Congress needs answers. What was the full extent of the Trump administration’s plans to kill Iranian officials? How does the attempted killing in Yemen have anything to do with an imminent threat?” Democrat Rep. Ro Khanna of California tweeted Friday reacting to the news.

The Pentagon has blamed Soleimani and the Quds Force for attacks on coalition bases in Iraq in recent months, including the December 27 strike that killed an American contractor and Iraqi personnel. Soleimani was also blamed for the December 31 US Embassy attack in Baghdad, and the US military said he was responsible for killing hundreds in his time as a commander and wounding thousands more.

“We caught a total monster. We took them out. And that should have happened a long time ago. We did it because they were looking to blow up our embassy,” President Donald Trump told reporters Thursday.

“We also did it for other reasons that were very obvious. Somebody died … people were badly wounded just a week before. And we did it. We had a shot at it … that was the end of a monster,” Trump added, referring to a recent rocket attack by an Iranian-backed militia group in Iraq, Khatib Hezbollah, that killed an American contractor and wounded several US military personnel.

Trump claimed in an interview with Fox News Friday that Soleimani was targeting four embassies before he was killed.

The President’s comments came after two prominent Senate Republicans and congressional Democrats on Wednesday slammed the administration’s briefing on the reasoning for the strike following briefings by Secretary of State Mike Pompeo and Secretary of Defense Mark Esper.

Multiple lawmakers said they saw no specific intelligence that pointed to an imminent threat from Soleimani that justified the strike.

The US military has conducted airstrikes targeting the Yemen based affiliates of al Qaeda and ISIS and has also at times deployed small counterterrorism teams on the ground to target those terrorist groups.

The US also provides very limited, non-combat support to the Saudi-led coalition that is supporting the Yemeni government in its fight with the Houthis, who receive assistance from Iran.

While the US ended its practice of aerial refueling of Saudi and Emirati jets last year, it continues to share intelligence focused on countering Houthi missile and drone attacks, as well as providing advice on processes and procedures aimed at helping to avoid civilian casualties.

The US has long accused Iran of supplying the Houthis with missiles and other sophisticated weapons that they have used in those attacks.

The conflict in Yemen began in early 2015 when Houthi rebels — a minority Shia group from the north of the country — drove out the US-backed government and took over the capital, Sanaa.

The crisis quickly escalated into a multi-sided war, with neighboring Saudi Arabia leading a coalition of Gulf states against the Houthi rebels.

A report from the Armed Conflict Location & Event Data Project last June found that more than 91,000 people have been killed in the conflict since 2015. It also found that the Saudi-led coalition and its allies had been responsible for more than 8,000 of the approximately 11,700 deaths connected to the direct targeting of civilians in the conflict.

Last year, in a rare moment of bipartisanship, both the House and Senate passed a resolution (SR7) that called on the Trump administration to end all hostilities in Yemen that weren’t expressly authorized by the Congress. President Donald Trump vetoed the resolution in April and the support of the Saudi-led effort in Yemen continues.

The Trump administration has been insistent that is the President’s job to enact US foreign policy and that any attempt to limit his authority is inappropriate. In his veto message in response to SR7, Trump argued that Congress was the one overstepping its bounds.

“This resolution is an unnecessary, dangerous attempt to weaken my constitutional authorities, endangering the lives of American citizens and brave service members, both today and in the future,” Trump wrote.