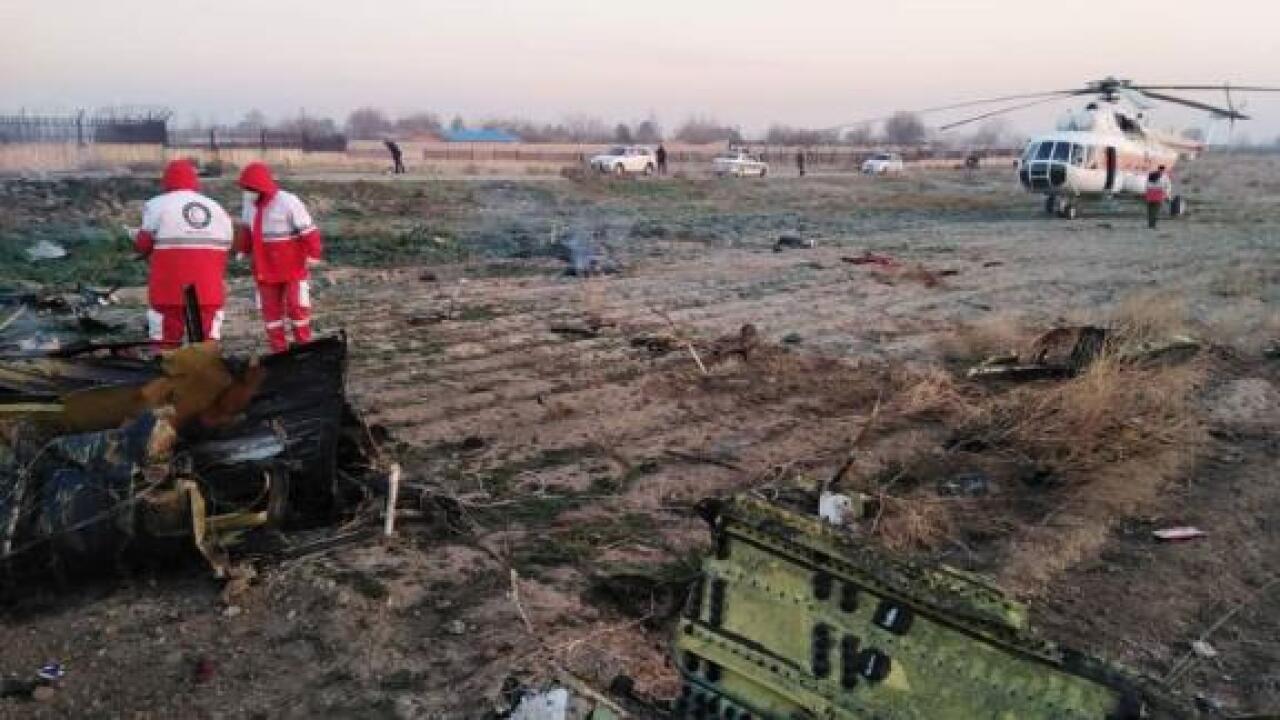 Boeing 737 with 180 passengers crashes near Imam Khomeini Airport in Tehran A Ukrainian plane crashed near Imam Khomeini Airport in Tehran early Wednesday morning according to Iran???s semi-official news agency ISNA. The Boeing 737 belonging to the Ukrainian Airlines had 180 passengers and crew aboard and crashed shortly after take-off due technical difficulties, ISNA says. Preliminary reports suggest that the plane was en route to Kiev. Link to picture: https://bit.ly/2QYkZ6H

CNN has obtained video on Thursday that appears to show a missile being fired into the Tehran sky and striking an object, around the same time that a Ukrainian plane crashed just after taking off from the city’s airport.

The US increasingly believes that Iran mistakenly shot down a Ukrainian airliner, according to multiple US officials.

News of the video comes hours after the leaders of Canada and Britain said that they have intelligence that the Ukrainian airliner was shot down by an Iranian surface-to-air missile.

Canadian Prime Minister Justin Trudeau, whose country lost 63 citizens in the crash of Ukrainian International Airlines Flight 752 earlier this week, said Canada’s intelligence, as well as intelligence provided by allies, shows that the commercial aircraft was shot down by an Iranian surface-to-air missile. He called for a thorough investigation into what caused the crash but would not provide additional details about the evidence and intelligence he cited.

“This may have been unintentional,” Trudeau said at a news conference in Ottawa.

“There is now a body of information that the flight was shot down by an Iranian Surface to Air Missile. This may well have been unintentional. We are working closely with Canada and our international partners and there now needs to be a full, transparent investigation,” Johnson said in a statement.

“The UK continues to call on all sides urgently to deescalate to reduce tensions in the region,” he added.

CNN reported earlier Thursday that the US increasingly believes Iran mistakenly shot down the airliner, according to multiple US officials. The working theory is based on continuing analysis of data from satellites, radar and electronic data collected routinely by US military and intelligence.

A US official familiar with the intelligence said the plane was shot down by two Russian made SA-15 surface to air missiles. The US saw Iranian radar signals lock onto the jetliner, before it was shot down.

The morning after the incident, US analysts discovered the data but took another day to verify, the official said.

Video appears to show a missile

Video sent to CNN appears to show a missile fired into the Tehran sky early Wednesday morning and striking an object in the sky. Around that time, the Ukranian airliner crashed shortly after takeoff.

CNN cannot verify the authenticity of the video, but the buildings seen in it appears similar to ones that are in the Iranian capitol suburb of Parand. The Ukrainian plane crashed just north of the suburb.

The video sent to CNN and the New York Times, shows a light in the sky, moving left to right and then exploding.

CNN has asked for more information from the individual who sent the video and how they obtained it, but has not yet received a response.

Trump says ‘somebody could have made a mistake’

President Donald Trump on Thursday said he suspected the crash was not due to mechanical issues, indicating that “somebody could have made a mistake on the other side.”

Asked during a White House event what he thought happened to the plane, Trump said, “Well, I have my suspicions.”

European security officials told CNN they believe reports suggesting that the plane was shot down by an Iranian surface to air missile in error are credible.

The timing of the crash has fueled speculation about its cause, coming just hours after Iran fired missiles at two Iraqi bases housing US troops in retaliation for the killing of its top general, also in Iraq. The exchange of attacks between Tehran and Washington on Iraqi soil was a dramatic escalation of tensions between the adversaries, and is raising fears of another proxy war in the Middle East.

The head of Iran’s Civil Aviation Authority is questioning the US allegation.

Speaking to CNN, Ali Abedzadeh said, “if a rocket or missile hits a plane, it will free fall.”

Abedzadeh asked, “How can a plane be hit by rocket or missile” and then the pilot “try to turn back to the airport?”

He also told CNN the plane’s black boxes are damaged and Iran may need help decoding them.

“Generally speaking, Iran has the potential and know-how to decode the black box. Everybody knows that,” Abedzadeh said.

However, he also added that, “the black box of this very Ukrainian Boeing 737 is damaged. Ukrainian Aviation experts arrived here in Tehran today. We had a session with them. From tomorrow they will start decoding the data.”

“If the available equipment is not enough to get the content” Iran will outsource the boxes to “the experts from France or Canada,” Abedzadeh said.

Newsweek was first to report US and Iraqi sources believe Iran shot down the plane by mistake.

“I don’t want to say that because other people have their suspicions,” Trump said, but added, “Somebody could have made a mistake on the other side … not our system. It has nothing to do with us.”

“It was flying in a pretty rough neighborhood. They could’ve made a mistake. Some people say it was mechanical. I personally don’t think that’s even a question.”

Asked if he thought it was downed by accident, Trump said, “I don’t know. I really don’t know … that’s up to them. At some point they’ll release the black box.”

“Ideally they’d give it to Boeing,” he said, but said giving it to France or “some other country” would be fine, too.

The Ukrainian International Airlines (UIA) flight PS752 came down just minutes after takeoff from Tehran on Wednesday local time, killing all 176 people on board, including dozens of Iranians and Canadians. The Boeing 737-800 was headed for Kiev, where 138 passengers were expected to take a connecting flight to Canada. Ukrainians, Swedes, Afghans, Germans and British nationals were also aboard.

One possibility being considered is that an Iranian missile unit saw something on their radar, thought they were under attack and fired.

“If it is true that an Iranian missile brought down a civilian airliner, it points to exactly the sort of miscalculation and recklessness that attends the cycle of escalation and violence we’ve been seeing in the region. The innocent people killed in this tragedy would then, sadly, not be the only victims. Iran must fully cooperate with investigators and be willing to account for their actions,” CNN national security analyst retired Adm. John Kirby said.

Iran’s Civil Aviation Organization head, Ali Abedzadeh, said it would not hand the flight data recorders to Boeing or the United States after they were found on Wednesday.

One of the officials said the US is working closely with the Canadians on the intelligence. US officials have also shared officials with UK officials, according to sources familiar.

Ukrainian officials on Thursday were considering terrorism, a missile strike and catastrophic engine failure as potential causes for the crash, as aviation authorities in Tehran said the jetliner was on fire before it came down.

Ukraine’s National Security and Defense council chief, Oleksiy Danilov, said a meeting was taking place with Iranian authorities, where various causes behind the crash were “being studied,” including a theory that the plane was hit by an anti-aircraft missile, according to a statement on Facebook.

Conflicting claims about potential causes for the disaster began hours after the crash, when Iranian state media blamed technical issues and Ukraine ruled out rocket attacks. Within hours on Wednesday, officials in both countries had walked back those initial statements.

An initial report by the Iranian Civil Aviation Organization on the crash cites witnesses as saying the airliner was on fire while in the air and changed directions after a problem, turning back toward the airport. People on other aircraft at higher altitudes also saw the flames, Iranian officials say. Images of the wreckage show the plane torn to piece, its parts charred and strewn across a field.

#BREAKING: @CBSNews has learned U.S. officials are confident that Iran shot down a Ukrainian jetliner in the hours after the Iranian missile attack on U.S. targets.

176 people were killed, including at least 63 Canadians. pic.twitter.com/g149hAcui0