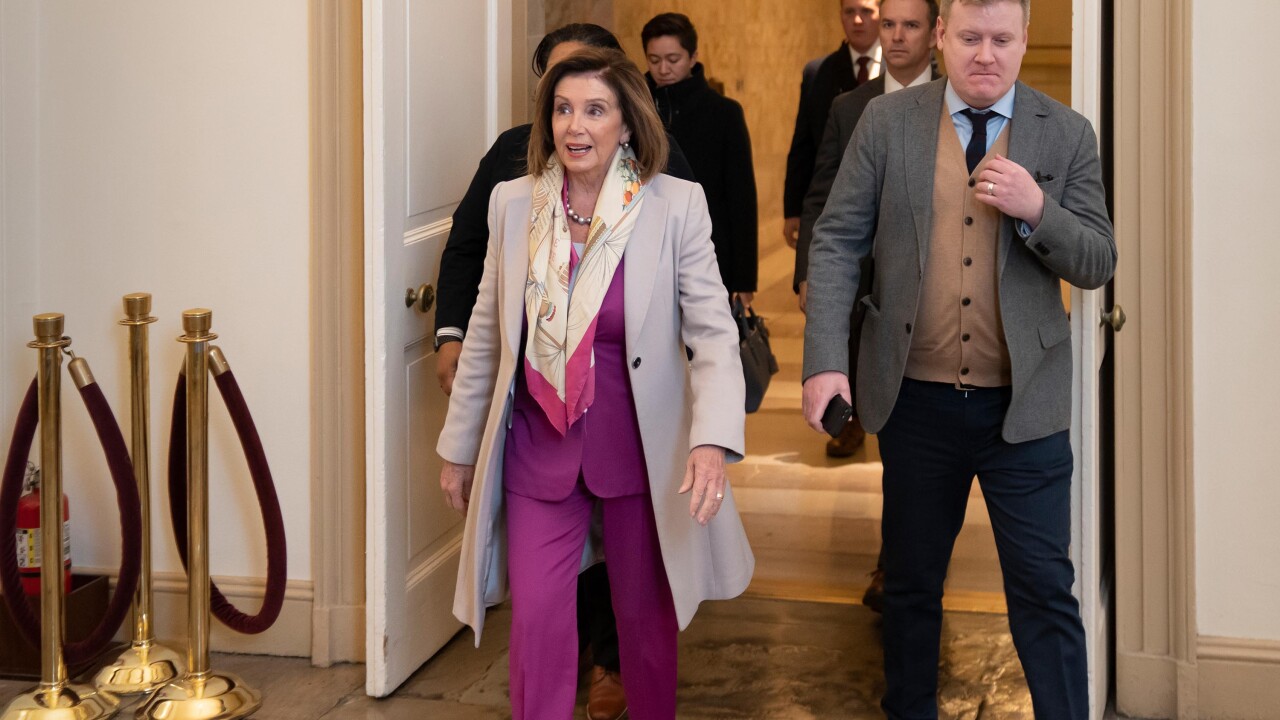 House Democrats seeking to restrain President Donald Trump’s military actions amid hostilities with Iran said Wednesday they may vote on a War Powers resolution as early as this week, but that timing could slip as members work to finalize the legislation.

House Majority Leader Steny Hoyer said Democrats expect to take action on a War Powers resolution “in the near term,” but did not provide exact timing for House consideration of the bill.

“It’s going to be sooner rather than later,” the Maryland Democrat predicted. And House Democratic Caucus Vice Chairwoman Katherine Clark said during a news conference beforehand that Democrats hope to vote on the resolution this week. But she later added a note of caution, saying there is no specific schedule in place.

“We are in the process of drafting what is a technical document,” Clark said of the resolution. “There is no set timeline.”

The debate on how to move forward with the legislation follows House Speaker Nancy Pelosi’s announcement over the weekend that the House will take up a measure similar to one introduced in the Senate by Democrat Tim Kaine of Virginia, which calls for the removal of US armed forces from hostilities with Iran not authorized by Congress. Freshman Rep. Elissa Slotkin of Michigan, a former CIA analyst and senior Defense Department official, will sponsor the House version of the bill.

Rep. Dan Kildee, also a Michigan Democrat, said leaders are trying to draft the bill in a way to ensure the Senate will vote on it.

“I don’t think any of us are interested in doing something that has sentimental value but doesn’t have the effect of law,” he said. “So we’re trying to get something that allows us to operate under the privileges of the Senate to get the Senate to vote on whatever it is we produce.”

“It’s all sort of hinging on what we can do that preserves the privileged status in the Senate,” he added of the timing for a House floor vote.

Members are also discussing this week whether to include language from two separate bills in the effort — one, sponsored by Rep. Ro Khanna of California to block funding for a war against Iran, and another led by Rep. Barbara Lee, also of California, to repeal the 2002 authorization for the use of military force in Iraq that the Trump administration has pointed to in the aftermath of its strike on top Iranian general Qasem Soleimani. Khanna and Lee’s bills were both included in the House-passed version of this year’s defense authorization act, but they were later stripped from the language after negotiations with the Republican-held Senate.

Some progressives want to see the legislation passed again, alongside the War Powers resolution. It’s not clear if the bills would be included in the text of the Slotkin resolution itself, or if the House would simply vote on them at the same time the War Powers bill comes up for consideration.

“We won’t move forward until we have the robust support of every corner of the caucus,” House Democratic Caucus Chair Hakeem Jeffries said when asked if the two bills will be included in the debate on Wednesday.

Hoyer also brought up the Khanna and Lee efforts, saying House Democrats “are still supportive of those amendments.”

“We’re having ongoing discussions about that,” Hoyer said. “I think we’re pretty close to resolving that so we will have consensus on how we ought to move forward.”

Senate Democrats are also hoping to proceed quickly with Kaine’s version of the War Powers resolution regarding Iran. He told CNN on Wednesday that he expects to see action on it in the Senate as soon as next week. As a privileged resolution, Kaine will be able to force a vote on the bill without support from Republican leaders.

Amid the push among Democrats to rein in Trump’s military action and halt an escalation of hostilities, members have called for more information from the White House about the intelligence behind the decision to kill Soleimani and the President’s plans going forward.

Top administration officials are set to brief members from both chambers about the situation in Iran on Wednesday afternoon.

Democratic Rep. Jason Crow, a former US Army Ranger who served in Iraq and Afghanistan, argued more information is needed from the White House in order for House Democrats to finish drafting their War Powers resolution.

“We need answers and clarity from them now,” Crow said. “And then we can start having discussions about what authorities they need to make sure that our troops are protected.”

In their effort to rein in the President on Iran, congressional Democrats are invoking the War Powers Act, otherwise known as the War Powers Resolution of 1973.

The War Powers Resolution stipulates parameters of presidential and congressional war powers, including imposing procedural requirements to ensure that presidents keep Congress apprised of military decisions as well as provisions that provide Congress with a mechanism to suspend military operations initiated by the President in certain circumstances.