EcoATMs: Legit way for cash or quick way for thieves to cash in? 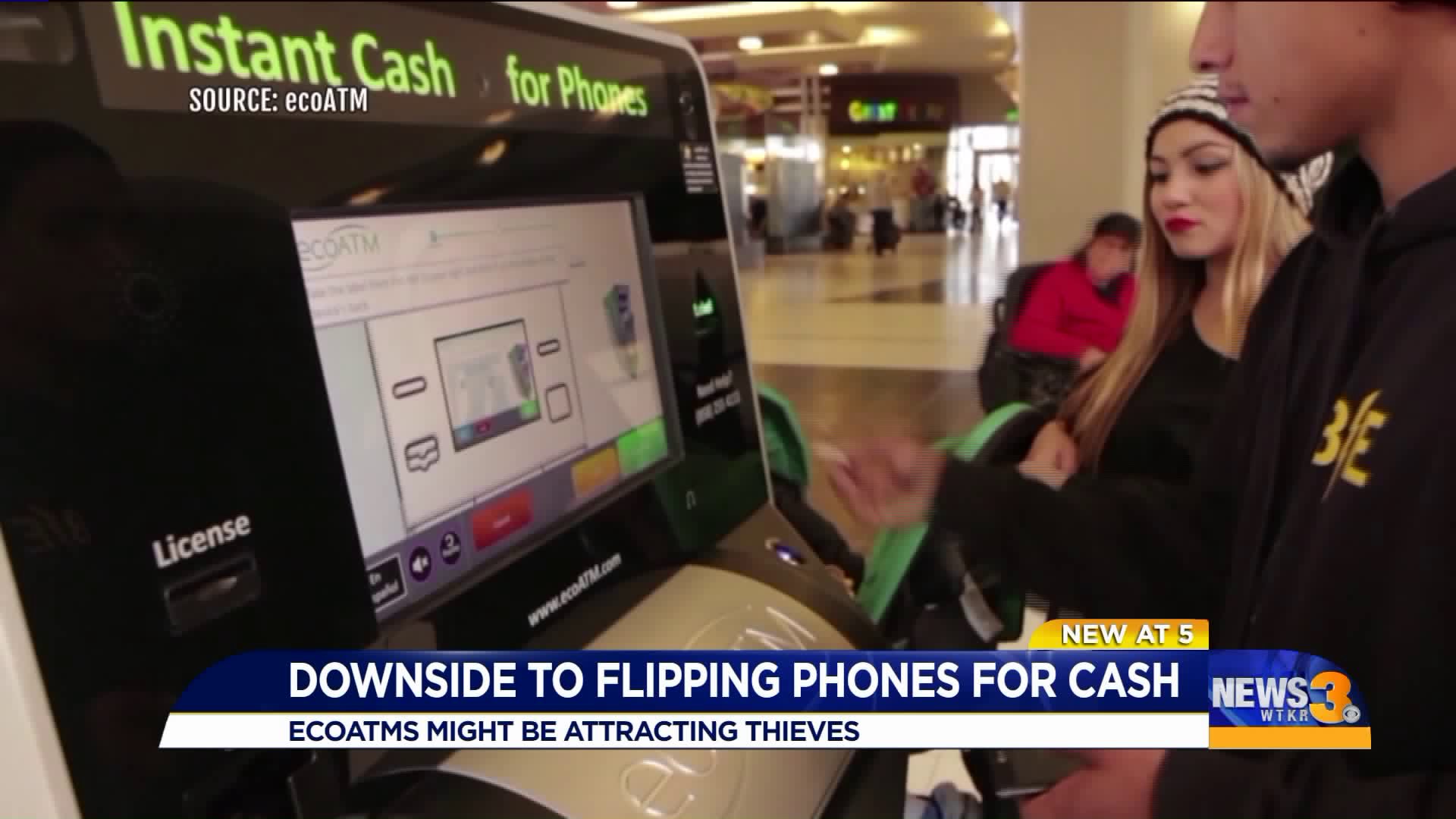 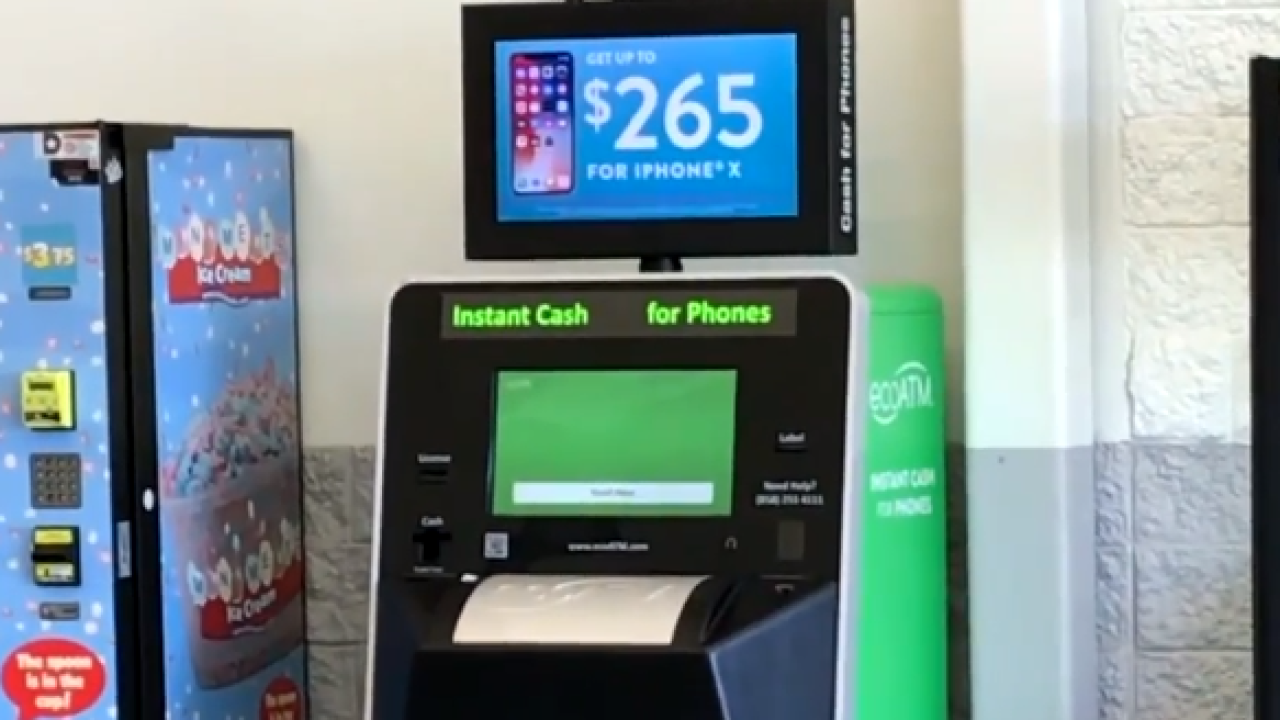 LAS VEGAS (KTNV) — A new-age way to recycle your cell phones is meant to be good for the environment and a good way for you to make a little money… but some worry the real winners could be thieves.

Heather Youngson was on high alert the August day she took the photo that sparked this story, KTNV reported.

"I had gone to Walmart and saw this man putting a lot of phones into a machine."

Her daughter Rebecca's iPhone was one of many that had been stolen days before at Wet'n'Wild.

Youngson reported the stolen phone to police but knew there was little chance of getting it back.

Then, she saw the man with all the phones at Walmart and wondered whether the machines were inviting crimes like the one Becca and her friends fell victim to.

"I was in shock!" Youngson exclaimed. "Because I was like, 'How easy is this?!'"

There are 16 ecoATM machines in the Las Vegas area, all located just inside the front door of either a Walmart or Smith's grocery store.

They were designed to be an easy, eco-friendly way to reduce electronic waste.

"It could be recycled altogether or we could find new use for the parts, but I think first and foremost it's ensuring that it doesn't end up in landfills," said ecoATM Spokesperson Chase Freeman. "We've diverted over 23 million devices from landfills to date in the past 10 years as a company."

They've only been in Las Vegas for two and a half years.

And that's after the machines were banned in Baltimore and in Riverside, California, due to backlash from law enforcement.

"Is your system bulletproof?" we asked Chase Freeman.

"Well, I don't think any system out there to that end is bulletproof but what I will tell you is we're very on top of every transaction."

The company tells us their machines are one of the worst places a thief can come to try to unload a stolen phone, and that's because of the security measures they have in place including cameras taking your picture from multiple angles and the requirement to put in a driver's license and leave a thumbprint.

We put the process to the test and saw that immediately a safety warning pops up telling us about the two-step I.D. check process.

We were surprised to see the option to sell the brand new iPhone 11, but ecoATM says 60 days after any new device is released, their kiosks are ready to receive.

"With the manufacturers releasing devices at such a rapid pace, as soon some consumers get the new one they trade it in within a few months," said Freeman.

Ramos says that's an even bigger temptation for criminals.

"You could be at a store, a big box store or something like that, snatch somebody's phone and before they even react to it -- even get a chance to call police -- you dump it in there and you're gone with $50, $60, $100, whatever it is," Ramos said.

That's exactly what happened to Carol Riggs in North Carolina.

Her iPad was stolen at a grocery store in 2015. Find my iPhone tracked the device to an armored truck in a Walmart parking lot.

When she confronted the driver, "He said, 'We go to recycle machines. They're called ecoATM machines.'"

Freeman explained, "Every transaction that is conducted at a kiosk across the country is kept in a database that is available to local law enforcement."

And with help from local police, Riggs got her iPad back.

EcoATM, which is based in San Diego, says stolen devices account for less than 1% of what they take in across the country.

But one can quickly find multiple cases of fraud with their machines, like a 17-year-old Georgia girl who police say used a stolen I.D. to cash in 26 stolen phones.

She was caught and, with ecoATM's help, successfully prosecuted.

LVMPD couldn't tell us what happened with those devices.

EcoATM says with live agents monitoring every transaction, it's constantly evolving its processes and security measures to bolster safety and dissuade crime.

Remember Heather Youngson's photo from the beginning of this story of the man who brought all the phones to an ecoATM kiosk?

"We were able to flag this man as being suspicious," says Freeman.

Although Freeman says none of the devices the man sold belonged to Youngson's daughter, "It seems that many of those devices were, in fact, fake devices."

That August day, the man sold 13 devices to the kiosk at Walmart on Charleston and Decatur.

Only four of them were real phones.

EcoATM says the same man sold a fake phone to a kiosk in June and in his history, he's sold them eight real phones.

"We often see people who come in who trade in more than one device."

EcoATM did not contact police because they say none of the phones were reported stolen and the man was only trying to defraud the company with dummy devices.

But he's now been blacklisted so he can longer sell at their kiosks.

This story was originally published by KTNV.