Eagles wonder ‘what if?’ after Carson Wentz knocked out with injury 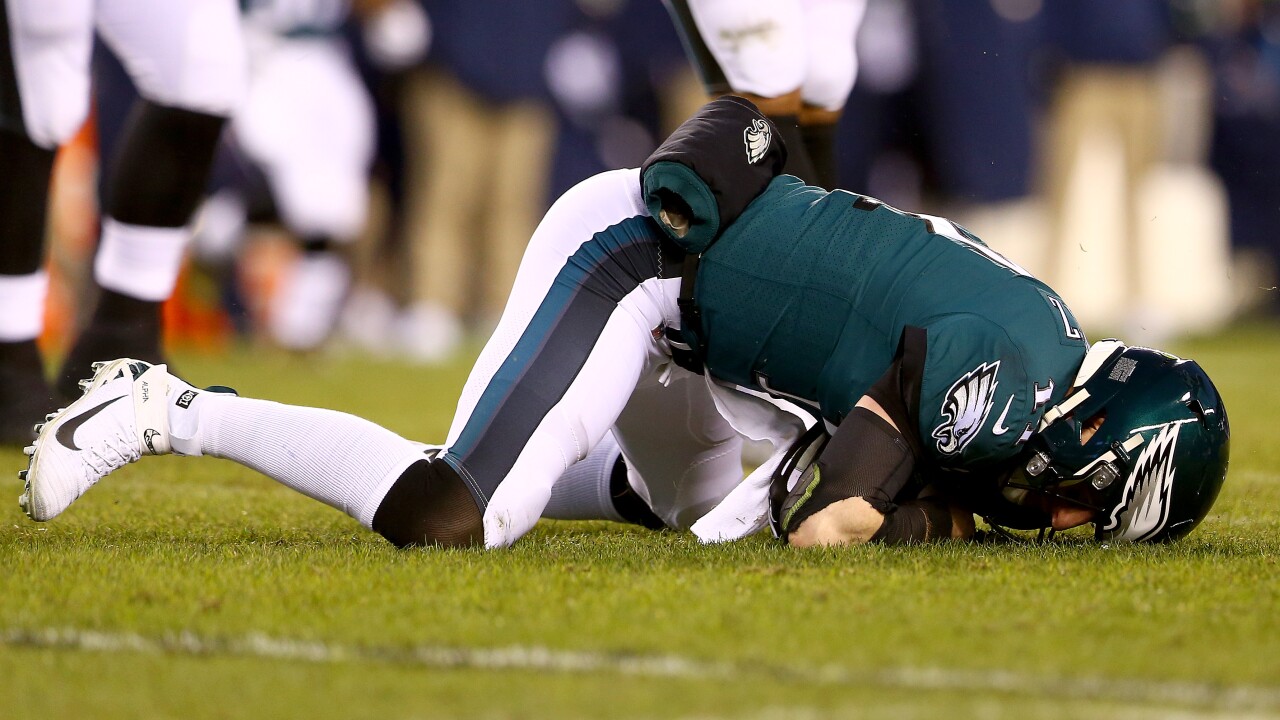 PHILADELPHIA (AP) — Carson Wentz waited four years to make his first playoff start. The Eagles’ franchise QB took only eight snaps before he ended another postseason on the sidelines.

Wentz was speared in the back of the head on a helmet-to-helmet hit from Seahawks defensive end Jadeveon Clowney — a bang-bang play that boarded on flagrant — and was knocked out of the game with a severe head injury.

Wentz was finished, and soon, so were the Eagles.

Wentz missed all the playoff fun because of injuries through his first four years, from “Philly/Philly” to “double doink” and, yeah, that Super Bowl win. He stayed healthy this season, led a rag-tag group of receivers to an NFC East championship and set franchise records all the way to a wild-card game at the Linc against the Seahawks.

The question lingered in the locker room after 40-year-old Josh McCown failed to rally the Eagles in a 17-9 loss to Seattle on Sunday — would the outcome have been different had Wentz stayed healthy?

“I’d say yes, if he’s healthy, with the gameplan that we had,” Eagles coach Doug Pederson said.

Pederson said a trainer notified him that Wentz needed to be checked out in the sideline medical tent. Wentz then left for the locker room late in the first quarter, never to return to the field.

“I kind of knew something was wrong right away,” Eagles tight end Zach Ertz said. “Just the way he got up. I’m devastated for my guy. Really tough.”

NFL referee Shawn Smith told a pool reporter there was no flag thrown because the contact was deemed “incidental.”

“He was a runner and he did not give himself up,” Smith said.

Clowney said: “I didn’t intend to hurt him. I hope he’s OK.”

Wentz missed the Eagles’ Super Bowl run two years ago because of knee surgery and last year’s wild-card win due to a back injury. Wentz watched from the sideline as Nick Foles became a local legend, leading the Eagles to the franchise’s first Super Bowl title two years ago. Wentz again was a spectator a year ago as Foles sparked an unlikely playoff berth and a wild-card victory.

Once Foles moved on to Jacksonville, the postseason was supposed to belong to Wentz.

He couldn’t even last a quarter.

The Eagles turned to McCown, a journeyman pulled out of retirement and playing in his first career playoff game, to lead them against the Seahawks. McCown fired up the packed Linc crowd when he scrambled 11 yards for a first down late in the second quarter. He gamely tried but couldn’t do much else, going 18 of 24 for 174 yards. On fourth-and-7 from the 10 with two minutes left, Clowney sacked McCown.

McCown looked pained as he crouched in the tunnel leading into the locker room, and was consoled by Ertz, perhaps the final moment of his NFL career.

ESPN hired McCown to be an NFL analyst on the day he announced he was calling it quits. McCown had come out of retirement in August to join his 11th team and play his 17th season, and just five months later, he was instead calling plays in a pinch, one more playoff game Wentz had to cede to a backup.

“You don’t want to be on the field under those circumstances,” McCown said. “But then it’s, OK, here we go, we’ve got to go. We’ve got to get going. Kind of started a little slow. Went faster, but the guys around me and Doug, helped me settle in.”

Wentz played though a patchwork set of receivers to lead the Eagles to four consecutive wins down the stretch and their second NFC East title in three seasons. Wentz started all 16 games for the second time in his four seasons and set single-season team records with 4,039 yards passing and 388 completions.

Wentz held it all together, and led the Eagles to consecutive comeback victories to start a winning streak that thrust them into the playoffs.

“The last five weeks, he really put the team on his back and said, ‘Hey, we’re going to get to the postseason, and I’m going to take us there,’” Ertz said. “And that’s what he did.”

Wentz, the No. 2 overall pick in 2016, took a pair of hard hits in the back against Seattle before Clowney delivered the crushing blow. The crown of Clowney’s helmet connected with the back of Wentz’s head and drove the QB into the turf.

“The guy has battled through everything the last couple of years,” Ertz said. “He’s the leader of this football team, unanimously. Guys love playing for him, no matter what some of the people say.”