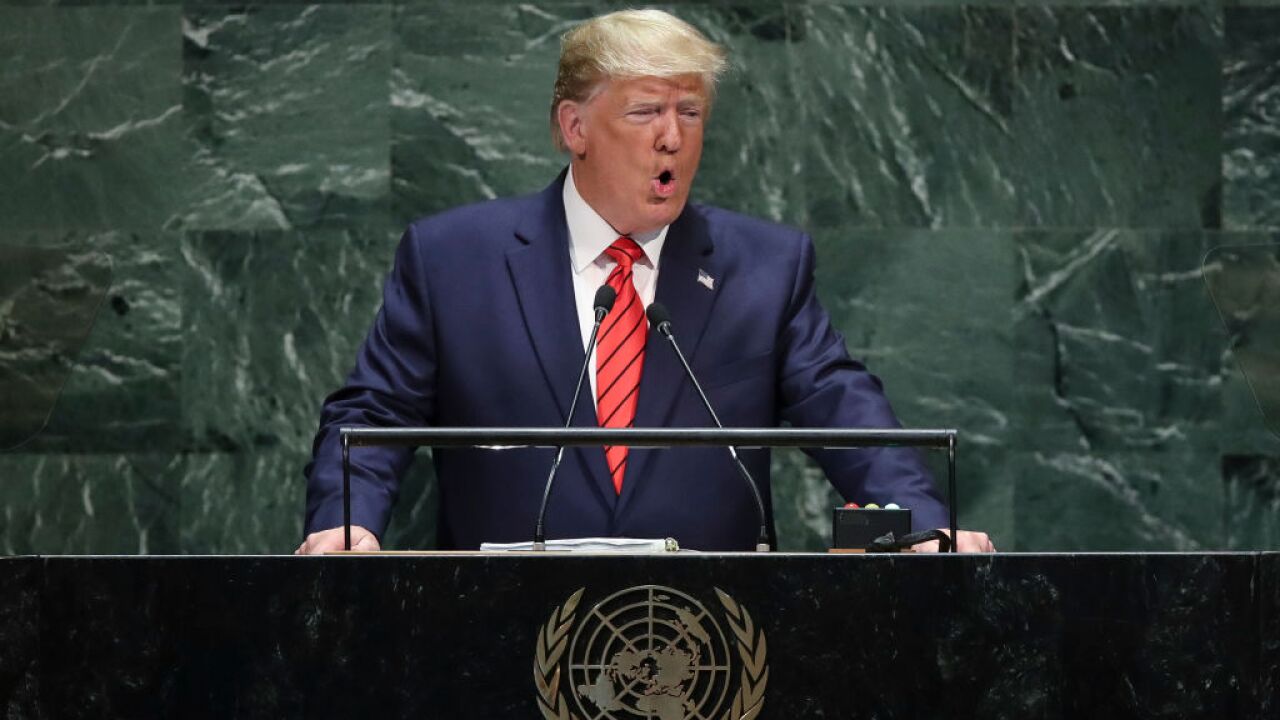 NEW YORK, NY – SEPTEMBER 24: U.S. President Donald Trump addresses the United Nations General Assembly at UN headquarters on September 24, 2019 in New York City. World leaders from across the globe are gathered at the 74th session of the UN General Assembly, amid crises ranging from climate change to possible conflict between Iran and the United States. (Photo by Drew Angerer/Getty Images)

The Trump administration sent Congress a formal notification Saturday regarding the drone strike ordered by President Donald Trump this week that killed Iranian military commander Qasem Soleimani, according to a top Democratic aide and a senior White House official.

White House officials told lawmakers on Friday the notification would be sent in accordance with the law. The notice must be sent within 48 hours of US forces entering into hostilities in accordance with the War Powers Act — a series of procedural requirements to ensure that presidents keep Congress apprised of military decisions.

House Speaker Nancy Pelosi said in a statement Saturday that the White House’s notification “raises more questions than it answers,” pointing to the decision to classify it as a “highly unusual” move that “compounds our many concerns, and suggests that the Congress and the American people are being left in the dark about our national security.”

“The Trump Administration’s provocative, escalatory and disproportionate military engagement continues to put servicemembers, diplomats and citizens of America and our allies in danger.,” Pelosi said in the statement. “This initiation of hostilities was taken without an Authorization for Use of Military Force (AUMF) against Iran, without the consultation of the Congress and without the articulation of a clear and legitimate strategy to either the Congress or the public.”

The White House move comes as the administration has yet to publicly explain the legal justification for killing Soleimani in the Thursday strike, and as Democratic lawmakers question whether Trump had the authority to order the strike without Congressional approval and raise concerns that Iran’s potential response was not fully considered. The US is deploying about 2,800 additional soldiers to the Middle East — on top of the 750 from the same unit sent earlier in the week — as tensions with Iran mount.

The War Powers Act states that when existing US armed forces abroad are “substantially enlarge(d)” without a war declaration, “the President shall submit within 48 hours… a report, in writing” to the House Speaker, currently Pelosi, a California Democrat, and to the President pro tempore of the Senate, currently Chuck Grassley, an Iowa Republican.

The report must outline “the circumstances necessitating the introduction of United States Armed Forces; the constitutional and legislative authority under which such introduction took place; and the estimated scope and duration of the hostilities or involvement.”

Some Democratic lawmakers have already moved to thwart potential military involvement in Iran without congressional approval. Democratic presidential candidate and Vermont Sen. Bernie Sanders teamed up with California Rep. Ro Khanna on Friday to file legislation to prevent funding for any military intervention in Iran. Virginia Sen. Tim Kaine filed a War Powers Authorization that same day that would require any hostilities with Iran to be approved by Congress through a declaration of war or new Authorization for the Use of Military Force (AUMF) — a “privileged” resolution that he can force a debate and vote on, though it’s not clear when that might happen.

Senate Foreign Relations Committee Chairman Jim Risch, an Idaho Republican, told CNN a few hours after speaking to Trump on Friday that Article II of the Constitution and the War Powers Act, were presented to him as the legal justification for Soleimani’s killing.

“(Forty-eight) hours is required and we will have that within 48 hours, I’m told,” he said when asked whether he would receive a War Powers Act notification.

Article II gives the President the “executive power,” and makes him “commander in chief” of the military, powers that virtually all presidents have interpreted to give them at least some room to use the military without express permission from Congress.

A post-9/11 Office of Legal Counsel opinion from 2002 related to presidential war powers explains the view of broad presidential authority to order military action without any additional legal authority — an argument that could be cited by the administration to defend the strike against Soleimani.

“Article II vests in the President, as Chief Executive and Commander in Chief, the constitutional authority to use such military forces as are provided to him by Congress to engage in military hostilities to protect the national interest of the United States. The Constitution nowhere requires for the exercise of such authority the consent of Congress,” it states.

Trump said on Friday he authorized the strike against the commander of Iran’s security and intelligence services because he was plotting “imminent and sinister attacks” on Americans.

“We caught him in the act and terminated him,” Trump said, a day after the strike.