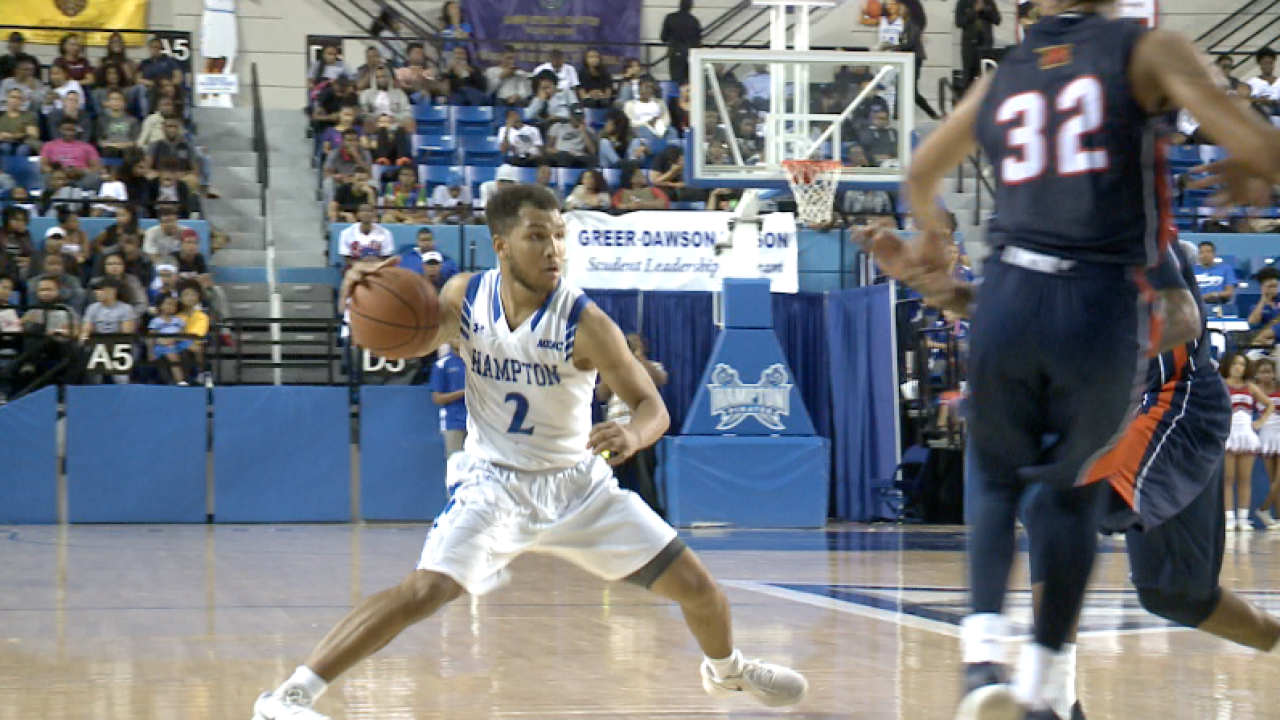 HAMPTON, Va. – In a game that saw 10 ties and 16 lead changes, Ben Stanley had 22 points and 13 rebounds to lead all five starters in double figures as Hampton defeated Charleston Southern 92-85 on Saturday night.

Neither team held more than a four-point lead in the first 12 minutes of the game as a Dontrell Shuler layup put Charleston Southern up 26-25 with nine minutes left in the half.  Hampton went on an 11-0 run over the next 4:35 to lead 36-26 on a Stanley layup with 4:30 left in the half.

The lead remained at 10 points after a 3-pointer from Chris Shelton with 3:50 left to give Hampton a 39-29 advantage, but the Buccaneers scored the next 11 points to lead 40-39 on a 3-point play by Phlandrous Fleming with three seconds left.  A length of the court pass from Greg Heckstall found a wide open Dondre Griffin for a layup to beat the buzzer as Hampton held a 41-40 halftime lead.

Much like the first half, neither team held more than a four-point lead through the first eight minutes of the half.  A pair of Fleming free throws gave the guests its last lead of the night at 61-60 with 12:29 left.  Hampton went on an 18-6 run to lead 78-67 on a triple by Heckstall with 6:48 left.  A putback by Fleming capped a 14-5 run by Charleston Southern as they trailed 83-81 with 99 seconds left.

Hampton hit 7-of-8 from the line in the last 99 seconds, the final four by Griffin as they kept the Buccaneers at bay for the 92-85 win.

Joining Stanley in double figures was Davion Warren with a season high 20 points and five rebounds.  Heckstall added 18 points, six assists and five rebounds, while Jermaine Marrow returned with 14 points and a career-high 14 assists.  Griffin added 12 points and four assists for Hampton who hit a season-high 55.9% from the floor (33-of-59) and 50% from 3-point range (9-of-18).

Marrow’s 14 assists were the fourth most in a game in school history and tied for ninth best in the Big South Conference against a conference opponent.  He was one off the school’s Division I mark of 15 by Marseilles Brown against Howard in 2000.

Hampton now hits the road to take on USC Upstate on Wednesday night in Spartanburg, S.C.

For more information on Hampton University men’s basketball, please contact the Office of Sports Information at 757-727-5757 or visit the official Pirates website at www.hamptonpirates.com.