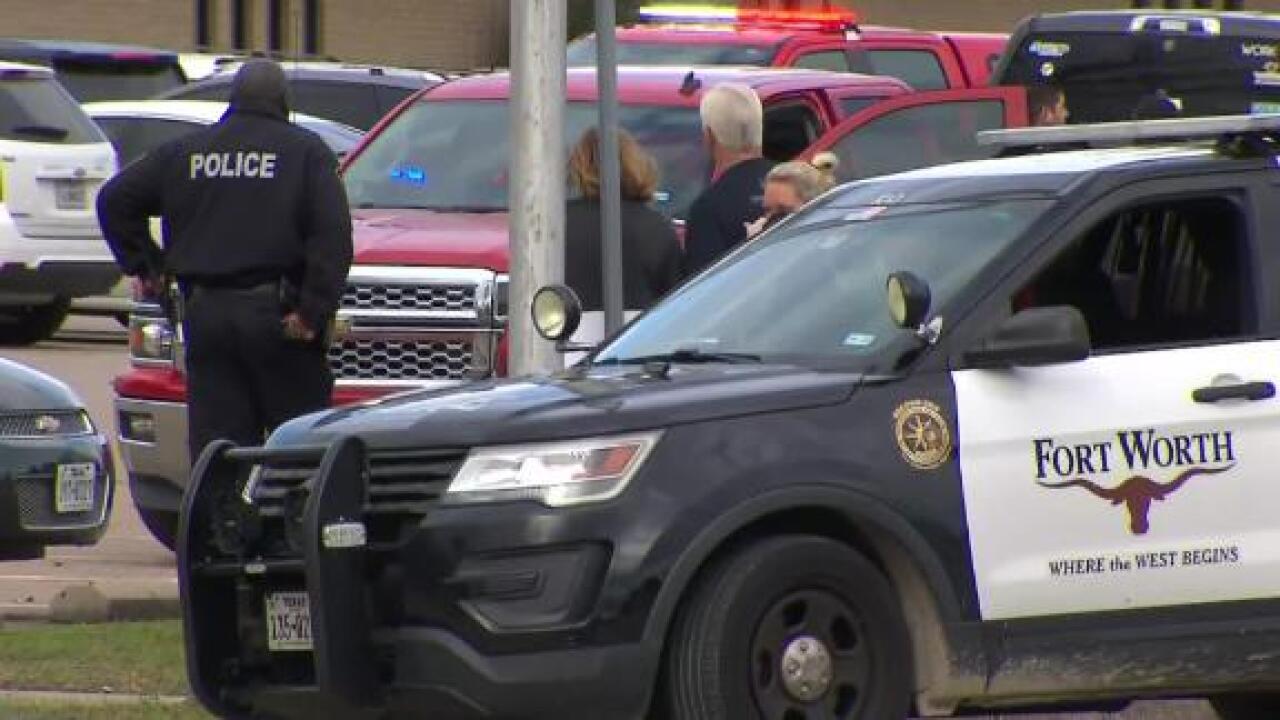 City Police Chief J.P. Bevering said the shooter entered West Freeway Church of Christ and sat down in the sanctuary, then stood, pulled out a shotgun and shot two parishioners.

“There was a security team inside the church and they eliminated the threat,” Bevering said.

Matthew DeSarno, the FBI agent in charge of the Dallas-Fort Worth area, didn’t identify the shooter, but said he was “relatively transient with roots to this area” and had been arrested multiple times in different municipalities.

The shooter was not on any sort of “watch list,” DeSarno said, but investigators will try to determine whether he was driven by any sort of ideology. Authorities said the motive is unknown, and nobody knows yet whether the shooter targeted the victims.

Texas Lt. Gov. Dan Patrick said the incident was over within six seconds thanks to the quick response of the security team members. Recent changes in Texas law allow licensed gun owners to carry firearms into houses of worship.

“Two of the parishioners who are volunteers on the security force drew their weapons and took out the killer immediately, saving untold number of lives,” he said.

The shooter and one of the victims died on the way to the hospital, said Macara Trusty, spokesperson for Medstar Mobile Healthcare. The second victim flatlined, was revived and later died, authorities said.

Authorities have not identified the shooter or victims yet.

A video livestream from the church, seen by CNN, appears to show how the shooting unfolded. The entire incident, from the time the shooter pulled out his gun until he was shot, took six seconds.

Lisa Farmer, the wife of the West Freeway Church of Christ Minister Britt Farmer, was not inside the church at the time of the shooting but said the video shows the inside of the church building.

The video, obtained by CNN affiliate KTVT, shows the shooter seated in a pew toward the rear of the church during the service. The shooter, dressed in dark clothes, approaches someone in the back corner and appears to talk to them. That individual gestures toward the center of the church.

The shooter pulled out a long gun and opened fire on the man before shooting a second man.

It appears that a man, toward the left of the screen, draws a handgun and fires. The shooter falls to the ground immediately. Three muzzle flashes are seen on the video.

The two people who returned fire against the shooter were members of the church and part of the church’s security team, but were not hired by the church, Regional Director of Texas Department of Public Safety Jeoff Williams told reporters Sunday night.

“The citizens who were inside that church undoubtedly saved 242 other parishioners,” Williams said.

Lt. Gov. Patrick said the state now allows licensed handgun owners to legally carry weapons into places of worship. Another law allows churches to develop, train and plan for their own teams to provide security.

‘It was so chaotic’

“It was so chaotic,” she said. “I think all the congregation is being held inside, all being held for questioning.”

The church normally has around 280 people attending Sunday services, she said. She didn’t identify the congregant who died but described him as a close friend “who would do anything for anybody that he could. Good guy. He’s been there for us through thick and thin.”

Video of the scene from CNN affiliate KTVT showed several agencies present — including Fort Worth Police, Fort Worth Fire Department and MedStar EMS. Several people could be seen outside the church, which was roped off with yellow police tape.

Britt Farmer, the senior minister, said the church will hold a meeting at 6 p.m. Monday to continue the service that was interrupted by the shooting.

“We lost two great men today but it could have been a lot worse,” he said at the news conference. “I am thankful our government has given us the opportunity to protect ourselves.

“There is evil in this world,” he said. “Today is one sermon I will never preach. It was called ‘Leaving a Legacy,’ and two men today left a legacy.”

The shooting comes more than two years after a gunman opened fire at a church in Sutherland Springs — a community about 300 miles away from White Settlement — killing at least 26 people.

Texas Gov. Greg Abbott offered his condolences in the wake of the shooting.

“Our hearts go out to the victims and families of those killed in the evil act of violence that occurred at the West Freeway Church of Christ,” he said. “Places of worship are meant to be sacred, and I am grateful for the church members who acted quickly to take down the shooter and help prevent further loss of life.”

Texas Attorney General Ken Paxton said he was “shocked and saddened” to hear about the shooting.

“As reports come in, please pray for any victims and their families, this congregation, and the law enforcement officials at the scene. My office will assist in any way needed,” he said.