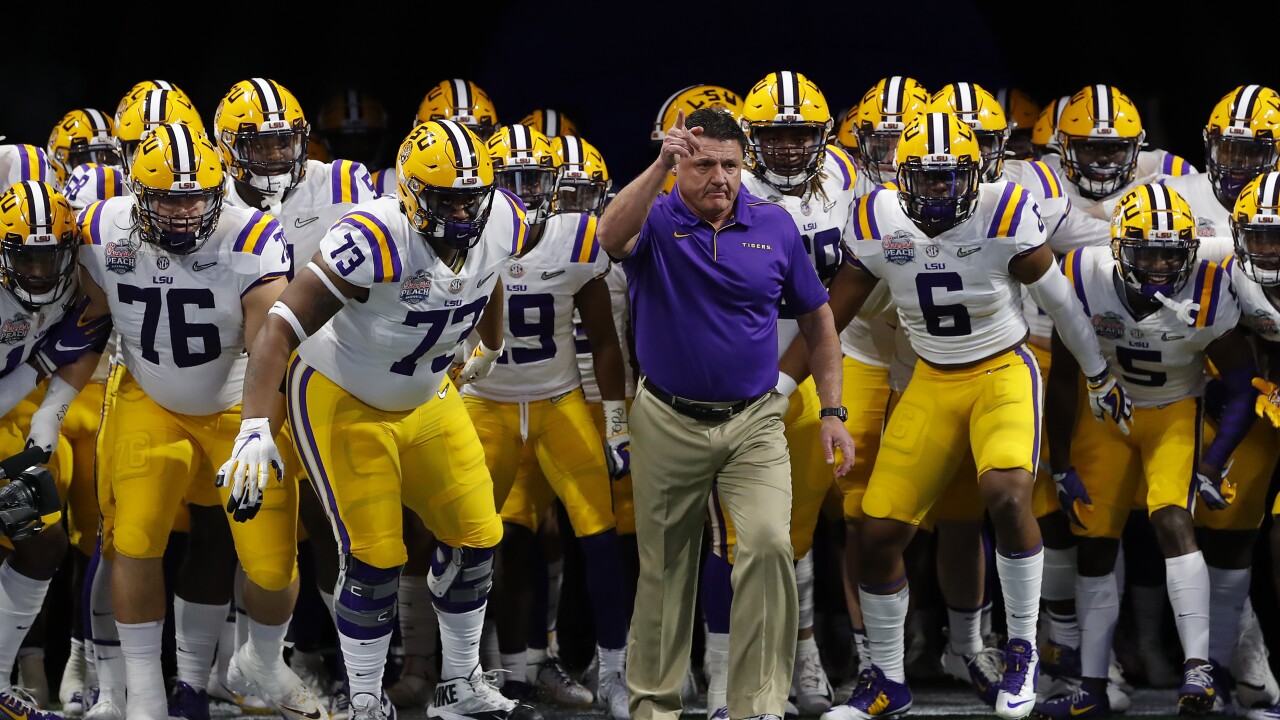 ATLANTA, GEORGIA – DECEMBER 28: Head coach Ed Orgeron of the LSU Tigers and team run onto the to take on the Oklahoma Sooners in the Chick-fil-A Peach Bowl at Mercedes-Benz Stadium on December 28, 2019 in Atlanta, Georgia. (Photo by Kevin C. Cox/Getty Images)

With a record-breaking performance, LSU has advanced to the College Football Playoff national championship game, dominating No. 4 Oklahoma 63-28 in the Chick-fil-A Peach Bowl on Saturday.

Next, the Tigers will play for a national title just 80 miles from their campus in Baton Rouge. The national championship game is January 13 at the Mercedes-Benz Superdome in New Orleans.

Their opponent will be the defending national champions, as No. 3 Clemson held off No. 2 Ohio State 29-23 in a thriller in the PlayStation Fiesta Bowl at State Farm Stadium in Glendale, Arizona.

Clemson (14-0) has now won 29 consecutive games, but the Tigers had to come from behind to do it, trailing the Buckeyes 16-0. With 1:49 left in the fourth quarter, Trevor Lawrence hit Travis Etienne for a 34-yard touchdown to give Clemson the lead.

Ohio State (13-1) had a chance to win, driving to the Clemson 23-yard line, but Clemson’s Nolan Turner intercepted a Justin Fields’ pass with 37 seconds left.

“We got tested,” Lawrence said to ESPN. “I think we passed.”

It will be Clemson’s fourth championship game appearance in five years.

Entering the College Football Playoff, LSU, Ohio State and Clemson were seen as the elite teams, with Oklahoma the only one of the four with a loss.

Burrow, this year’s winner of the Heisman Trophy and widely presumed the top pick in the upcoming NFL draft, is the first player in Football Bowl Subdivision history to have eight touchdowns in a bowl game.

In the first half, Burrow threw for seven touchdowns, tying the record in any bowl game for passing touchdowns thrown in a game. Four of those touchdown receptions went to wide receiver Justin Jefferson, who tied the all-time single-game bowl record with that tally.

ATLANTA, GEORGIA – DECEMBER 28: Quarterback Joe Burrow #9 of the LSU Tigers post the “LSU” sticker on the oversized bracket to indicate advancing to the National Championship in New Orleans. (Photo by Todd Kirkland/Getty Images)

To add to a stat line that looked like it came from a video game, Burrow also rushed for one touchdown. For the night, he completed 29 of 39 passes for 493 yards — and that includes sitting for most of the fourth quarter.

With his performance on Saturday, Burrow became the fifth quarterback to throw for 5,000 yards and 50 touchdowns in a season.

Burrow graduated in three years from Ohio State. But he didn’t get a lot of playing time when he was with the Buckeyes, so he transferred to LSU in 2018 and has flourished since.

When asked if he’d prefer to play Ohio State to potentially have a perfect ending to his college career, Burrow simply said, “I’m excited to play in the national title game.”

This is LSU’s first year in the College Football Playoff, which has been in use since the 2014 season. The Tigers last won the national championship in the 2007 season, defeating Ohio State 38-24 in the BCS championship game.

LSU’s win, however, comes on a day of tragedy.

Carley McCord, a sports reporter at CNN affiliate WDSU and daughter-in-law of LSU offensive coordinator Steve Ensminger, was killed in a plane crash in Lafayette, Louisiana, on Saturday. Ensminger, who did coach on Saturday, was aware of McCord’s death earlier in the day.

Orgeron said he learned of the plane crash at 12:30 p.m. ET at a coaches’ meeting with assistant Derek Ponamsky, when Ponamsky received a text message. Orgeron said he then went to find Ensminger to break the news to him.

“I told him what happened, and here’s what he said: ‘Coach, we’re going to get through this,'” Orgeron said. “Obviously he was distraught, but he called a great game today.”

When asked if it was a difficult decision for Ensminger to work today, Orgeron said, “There was no question. He didn’t hesitate.”

Orgeron said he didn’t want the team to know about what happened before the game.

“Neither did Steve. We tried to keep it from them. I think they found out before the game. There was a little concern they might be a little low, but it sure wasn’t the way we started. Give credit to your football players.”

Not all the players, including Burrow and Jefferson, knew until after the game was over, during interviews.

ATLANTA, GEORGIA – DECEMBER 28: Quarterback Jalen Hurts #1 of the Oklahoma Sooners is tackled by the defense of the LSU Tigers. (Photo by Mike Zarrilli/Getty Images)

Jalen Hurts: ‘This is a feeling I’ve never felt before’

“It’s hard to just sit here and reflect on four years, a whole year with my brothers this year, all of that right now,” Hurts said. “It hurts me. You talk about how much it means to you and the team. It’s supposed to hurt. This is not a good feeling. This is a feeling I’ve never felt before.

“It hurts me in my heart, you know. When I decided to come to this school, I told Coach (Lincoln) Riley, I’m going to go win you a national championship, and I failed to do that.

“Moving forward, I definitely hope — I’ve already told them, I hope that you guys learn from this. I hope everybody learns from this. It hurts me the most because usually, when you come up short in something, you can come back and you can fix it. I can’t come back and fix it. I’ll never play college football again.”