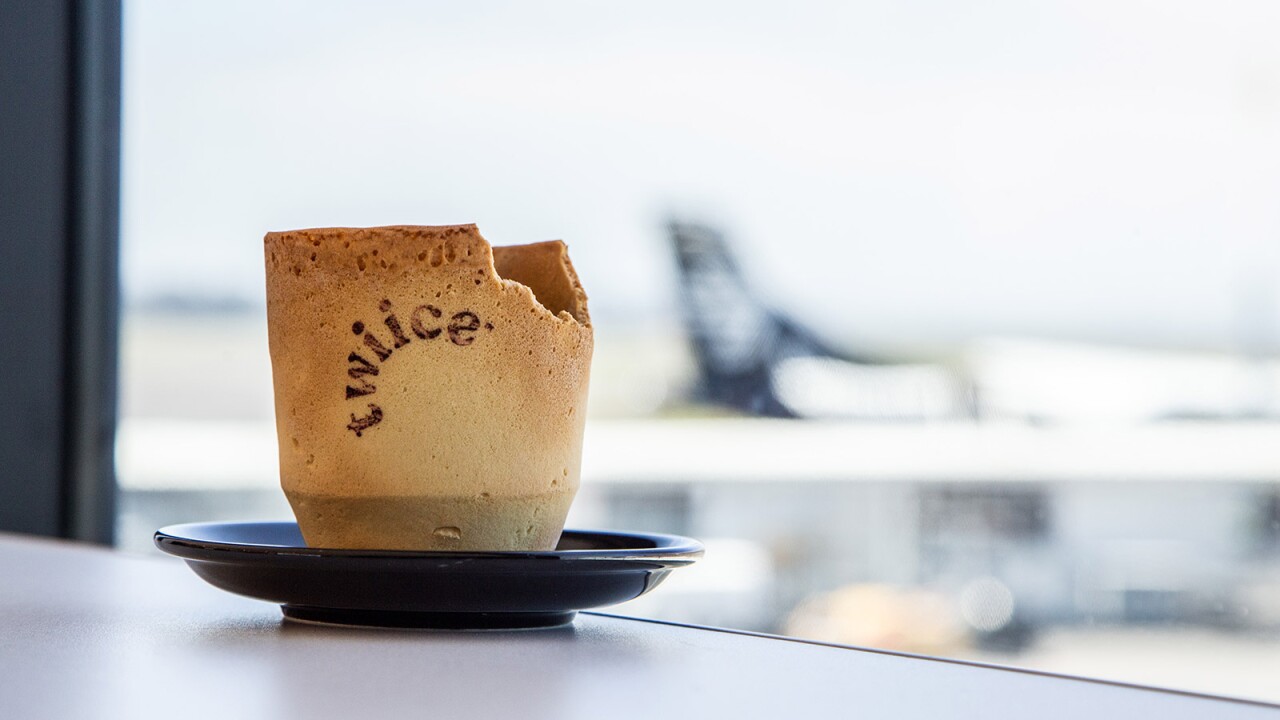 Each Twiice cup is a slightly different shape and size due to their unique construction.

What’s better than a nice, warm cup of coffee? If you ask Air New Zealand, the answer is following the java up with the sweet taste of … cup.

Yes, that’s right — New Zealand’s national carrier is experimenting with a new edible coffee cup that will further reduce waste produced on board.

Although the airline had already made the big switch to biodegradable cups both on planes and in their branded lounges, they began looking into even more eco-friendly options.

To do this, the airline collaborated with New Zealand-based company Twiice, a family-run business dedicated to making edible plant-based cups that taste as good as being good to the earth feels.

The cups now being rolled out on Air New Zealand flights are vanilla-flavored and can withstand the heat of coffee without melting.

Each Twiice cup is a slightly different shape and size due to their unique construction.

Air New Zealand customer experience manager Niki Chave tells CNN in a statement that the airline serves 8 million cups of coffee on board its planes annually. And so far, the customers who have tested out the Twiice cups have given the taste a thumbs-up, she adds.

This isn’t the only move Air New Zealand has made to go greener in the skies. In July 2019 the airline announced that condiments like salad dressing and soy sauce would be served in small reusable bowls instead of individual plastic packets.

While the Twiice cups are currently a one-off partnership between the two companies, there may be additional opportunities for them to work together in the future.

Jamie Cashmore, a co-founder of Twiice, says that the firm is working on a new, expanded line of edible plates and dishes, which could also work for Air New Zealand once they can be produced at scale.

Addressing the world’s plastic crisis has become a major issue in all sectors of the travel business, not just airlines.

The state of California banned trial-size shampoos and other toiletries from hotels, while some conglomerates like Hyatt and IHG (which owns brands like Holiday Inn and Hotel Indigo) have also vowed to do the same across all of their properties.