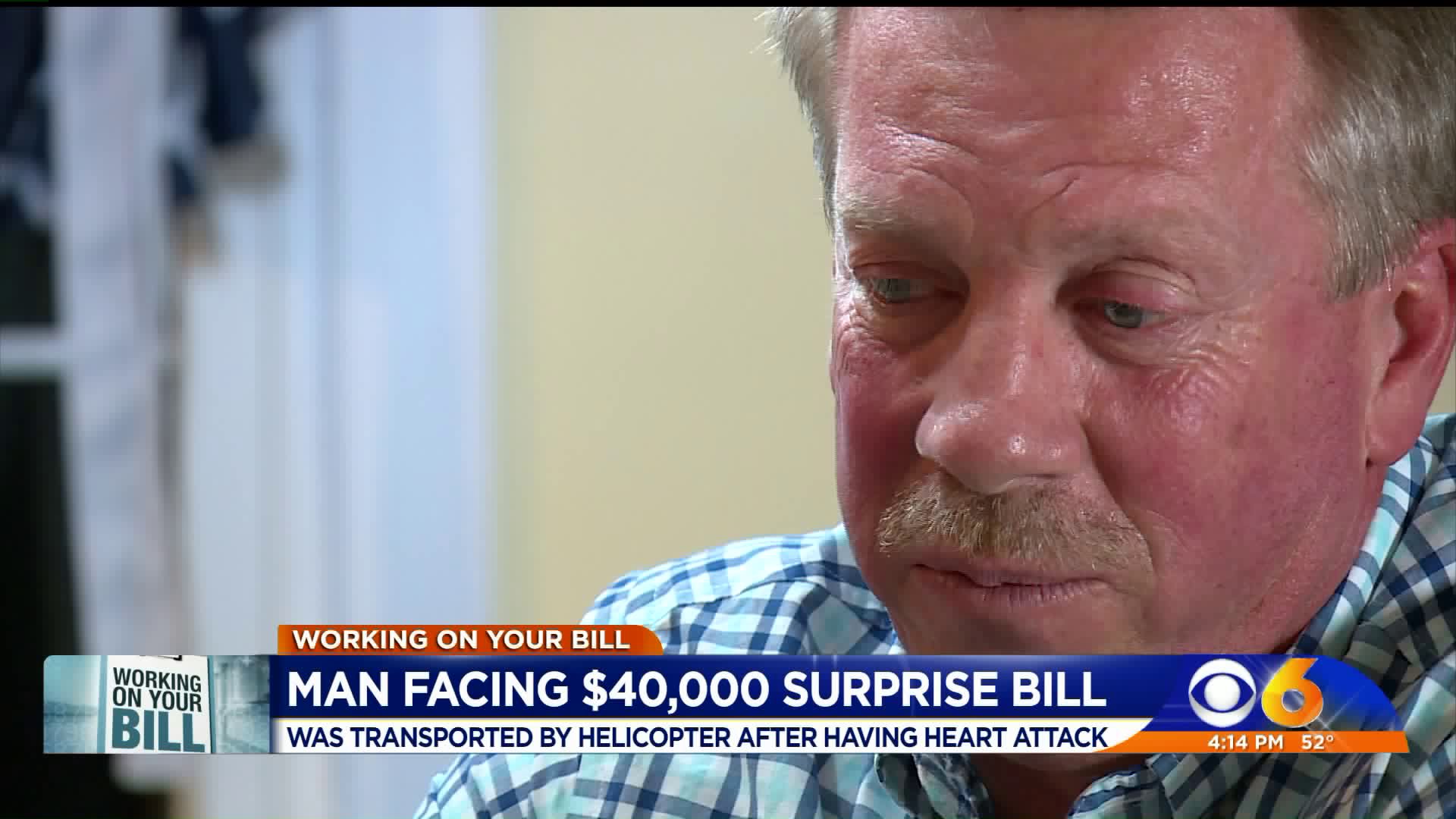 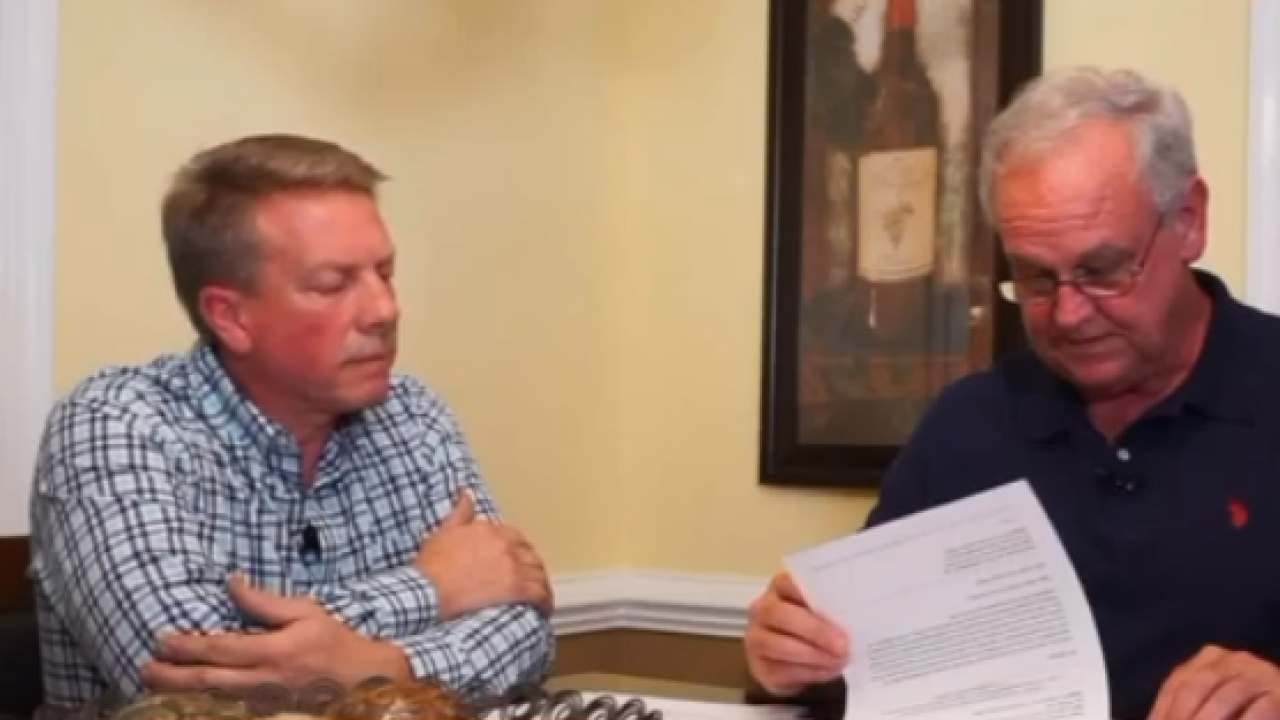 KILMARNOCK, Va. - William “Chris” Tatum tried to ignore the uncomfortable heartburn he felt during a family vacation over Labor Day weekend of 2018. When numbness and tingling started to creep up his arms, Tatum asked his wife to take him to an emergency room.

The closest facility in his health insurance network happened to be Bon Secours Rappahannock General Hospital.

“The doctor said, ‘Mr. Tatum, you are having a heart attack and we are going to get you to the best place for treatment,” the mechanic from Hanover told the CBS 6 Problem Solvers.

Emergency staff loaded Tatum onto a helicopter for a quick flight to Bon Secours Memorial Regional Medical Center in Mechanicsville, where he underwent a procedure and soon recovered. Tatum and his family remain grateful for what they believe was life-saving medical care.

“Then they sock it to you with a ridiculous bill,” Tatum says of the letter he received shortly after his release from the hospital.  It requested a $57,138.61 payment to the helicopter transport company, Air Methods.

UnitedHealthcare, Tatum’s insurance provider, paid $18,140.32, leaving him with a balance of $38,998.29. He says a year of appealing to both companies did not resolve the bill. Tatum consulted lawyers but didn’t get the impression any of them could get the account cleared. Tatum began receiving calls and letters from Medicredit, a collections agency. Then, his extended family began an outreach campaign to force the issue.

“A terrible disservice has been done to the patient when an Air Ambulance Service helps to save a patient’s life by rapid transport to a medical facility, but then bankrupts him after getting him there,” Tatum’s step-father Ted Brooks wrote in a letter to lawmakers, state regulatory agencies, consumer advocates and eventually the Problem Solvers.

“This billing is outrageous and it’s causing issues that could potentially send him back to the hospital," said Brooks.

The family became increasingly frustrated as they researched Air Methods and the billing company Rocky Mountain Holdings, LLC. The Tatums learned there are no laws in Virginia to protect consumers from balance billing, a practice where patients visit an in-network healthcare facility but receive out-of-network services without warning.

“There was no discussion. They said, ‘this is what we’re doing’ and I didn’t have a chance to consider other ways to get treatment,” said Tatum of his transport between hospitals.

The Problem Solvers spent weeks investigating Tatum’s case and contacting each company involved. Air Methods sent two lengthy statements regarding its billing practices, noting helicopters are dispatched by hospital staff and that the company makes the trip without knowing if a patient has insurance coverage because the focus is solely on delivering emergency care.

“Our healthcare system is complicated and, unfortunately, patients are often caught in the middle,” wrote Air Methods spokesperson Doug Flanders.

Flanders provided the Problem Solvers with a list of recent initiatives by Air Methods to assist customers.  It included expanding its Patient Advocacy Program, increasing the number of in-network agreements with commercial health plans, and advocating for higher reimbursement rates from Medicaid and Medicare.

Air Methods claims 70 percent of flights transport patients with no insurance or coverage from Medicare or Medicaid. The company says payments for those flights only cover about 30 percent of the cost, forcing them to bill patients with private health insurance for the balance of their expenses. According to Flanders, Medicaid and Medicare in Virginia pay $2,000- 6,000 per flight.  The original bill for Tatum's flight totaled more than $57,000.

UnitedHealthcare pushed back saying its payment of $18,000 was "more than fair based on average market rates," and that the Tatum family will not be responsible for the nearly $40,000 balance.

“We have spoken with the family about these excessive charges and let them know they will be taken out of the middle and should not pay this air transport bill,” Maria Gordon Shydlo, wrote on behalf of UnitedHealthcare.

This week Air Methods confirmed an agreement has been reached. Flanders expressed sympathy for the stress experienced by Tatum’s family and relief at the account’s resolution.

“Our hope would have been that UnitedHealthcare would have paid the cost of the transport from the very beginning rather than put Mr. Tatum though the months of appeals and requiring him to escalate this,” wrote Flanders.

For its part, Bon Secours defended the decision to transport Tatum, saying patient safety and well-being is top of mind and separate from any potential cost considerations when delivering necessary medical care.

“While third party bills do not originate from Bon Secours, we do provide financial assistance for both the insured and uninsured patient who receives emergency or other medically necessary care from any of our hospitals. We always recommend that patients reach out to our patient advocacy representatives,” Bon Secours said in a statement to the Problem Solvers.