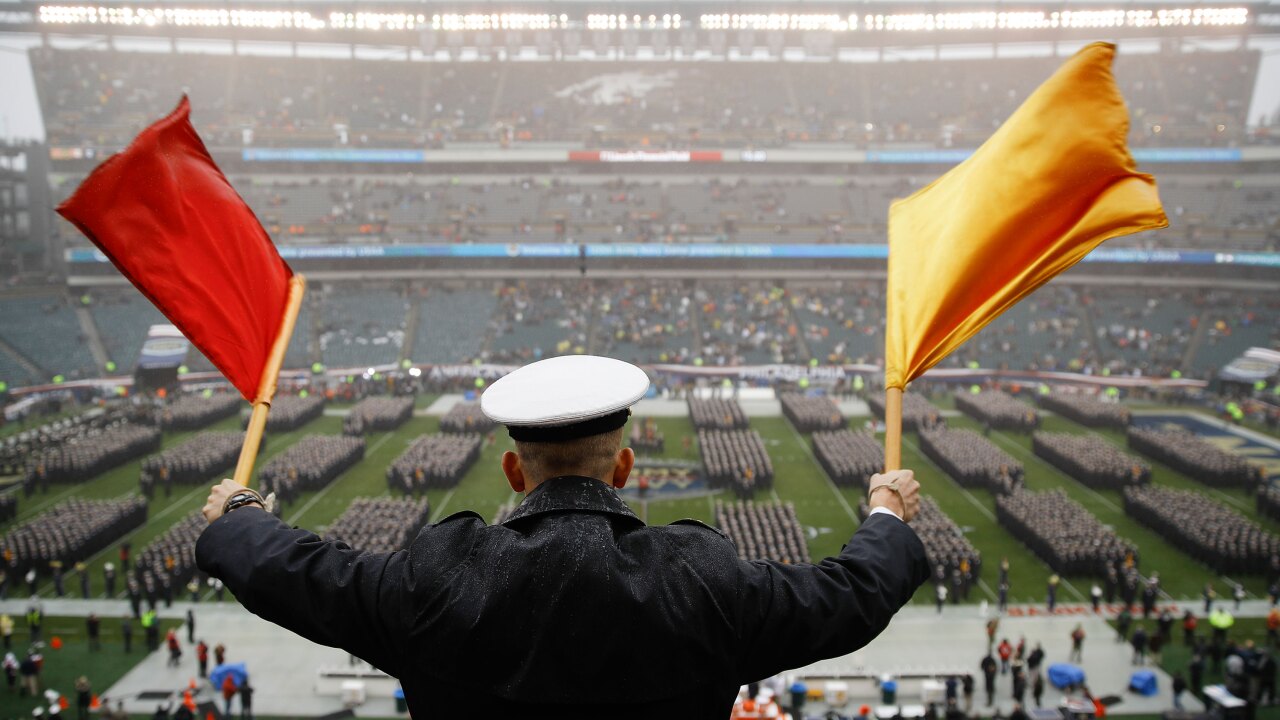 A Navy Midshipman signals his classmate on the field ahead of an NCAA college football game between the Army and the Navy, Saturday, Dec. 14, 2019, in Philadelphia. (AP Photo/Matt Rourke)

The US Military and Naval academies on Sunday launched internal investigations after cadets and midshipmen were captured on ESPN’s pre-game show for the Army-Navy game making a hand gesture that some are interpreting as white nationalist and others are interpreting as innocent.

In a statement Sunday night, the Military Academy — commonly known as West Point — said its investigation is looking into the “use of hand gestures by a few Cadets” during the broadcast before Saturday’s game.

“The United States Military Academy is fully committed to developing leaders of character who embody the Army Values. I have appointed an Investigation Officer…to conduct an administrative investigation into the facts, circumstances, and intent of the Cadets in question,” Lt. Gen. Darryl Williams, superintendent of the academy, said.

Cmdr. Alana Garas, a Naval Academy spokeswoman, said in a statement earlier Sunday that “U.S. Naval Academy officials have appointed a preliminary inquiry officer to conduct an internal investigation into the hand gestures made during the ESPN College GameDay broadcast prior to yesterday’s Army-Navy game.”

Both academies said the investigations into the gestures will determine whether any actions will be taken against the cadets and midshipmen.

The gesture in question is when someone forms the “OK” sign with their fingers and thumb — a sign that can be associated with white nationalism.

There was disagreement online about the meaning of the gesture, with some Twitter users retweeting a video clip from the broadcast and remarking that they believed the students were making a hate symbol. Others saw it more innocuously, believing the gesture was a sign that is part of the “Circle Game” played by kids. That game is commonly played when a person forms an “OK” with their hand below their waist to trick a second person into looking at it and getting punched.

The Anti-Defamation League, which studies hate messages, said in a report earlier this year that it now considers the “OK” gesture a hate symbol in some cases.

The ADL has previously said the use of the “OK” symbol “in most contexts is entirely innocuous and harmless.” The gesture acquired new significance in 2017 after some members of the website 4CHAN claimed it represented the letters “wp” for “white power,” according to the ADL.

Secretary of Defense Mark Esper said on Monday that he doesn’t believe white nationalism is a problem in the military.

“I don’t believe it’s an issue in the military. There is no room whatsoever for anybody to have — to be a white nationalist or to be a member of any hate group whatsoever or harbor anything like that,” Esper said to reporters while flying back to Washington from a ceremony in Luxembourg marking the 75th anniversary of the Battle of the Bulge. “That said, I understand some claims were made. I also understand that both academies are investigating these and we’ll see what comes out.”

The Southern Poverty Law Center, which has tracked extremist groups and their actions for decades, applauded the military for investigating the matter.

“It is definitely hard to know if they intended this as a white power signal, but given who these people are, they should be sure to take this very seriously. We cannot have people playing around with white supremacy in the military,” Heidi Beirich, the director of the Intelligence Project at the SPLC, told CNN. “If nothing else, it’s a teachable moment. Even if they didn’t mean it. They should know that the symbol now has two very different meanings.”