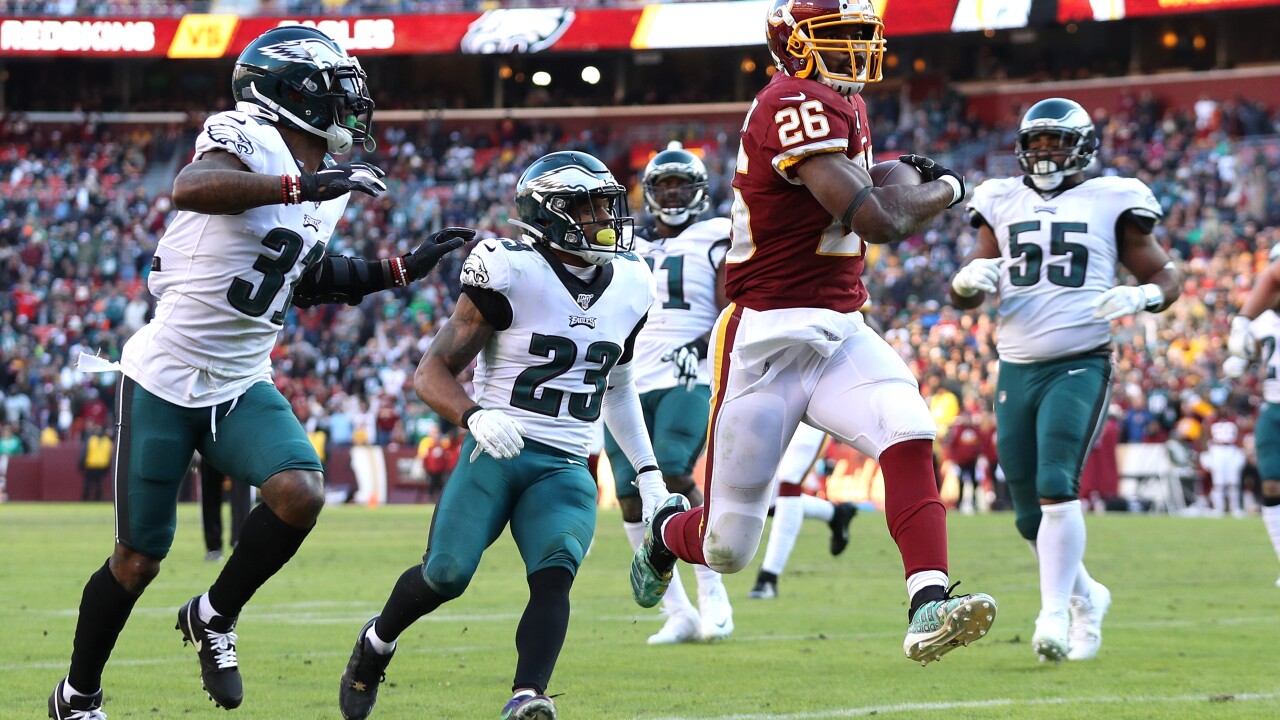 LANDOVER, MARYLAND – DECEMBER 15: Running back Adrian Peterson #26 of the Washington Redskins scores a touchdown against the Philadelphia Eagles during the fourth quarter at FedExField on December 15, 2019 in Landover, Maryland. (Photo by Patrick Smith/Getty Images)

LANDOVER, Md. – The Washington Redskins’ offense gave us their most impressive outing of the season Sunday, but fell to the Eagles 37-27 at FedEx Field.

The Eagles got on the board first, capping off an 88 yard-drive with a 25-yard field goal by Jake Elliott.

While Washington’s first possession of the game resulted in zero points on the board, the Redskins picked up three first downs and continued that momentum on the first play of their second possession. Dwayne Haskins connected with Terry McLaurin for a 75-yard touchdown to put Washington up 7-3 with just over a minute remaining in the first quarter.

Philadelphia quickly answered back with a 1-yard touchdown run by Miles Sanders in the second quarter.

The Redskins don’t waste time retaking the lead. A 75-yard drive ended in Haskins connecting with Steven Sims Jr. in the end zone, resulting in a 14-10 Washington lead that they’ll take into halftime.

The back-and-forth scoring continued into the second half.

Carson Wentz came up with an unbelievable pass to Miles Sanders in the back of the end zone and the Eagles went up 17-14 in the third quarter.

The Redskins didn’t find the end zone until the start of the fourth quarter. Adrian Peterson rushed for a 10-yard touchdown that gave Washington a 21-17 lead.

Peterson’s touchdown marked the 110th of his career, and puts him in a tie with Walter Payton for fourth all-time in NFL history.

The Eagles took the lead with 9:59 remaining in the game when Wentz connected with Zach Ertz for a touchdown. Philadelphia’s three-point lead wouldn’t last long, and a Dustin Hopkins 53-yard field goal tie the game at 24 with 8:02 left in the quarter.

Once the Eagles got the ball back, it was turned over to Washington on a fumble and the Redskins regained the lead with a 43-yard field goal by Hopkins.

In the end, it was the Eagles who came out on top. With 26 second remaining in the game Wentz completed a touchdown pass to Greg Ward, Ward’s first career touchdown.

Adding insult to injury, the Eagles force a turnover on the final play of the game and score, winning 37-27.

The Eagles (7-7) remain in the postseason hunt and host the Cowboys (6-7) next weekend. The Redskins (3-11) close out their 2019 home slate with a matchup against the New York Giants.