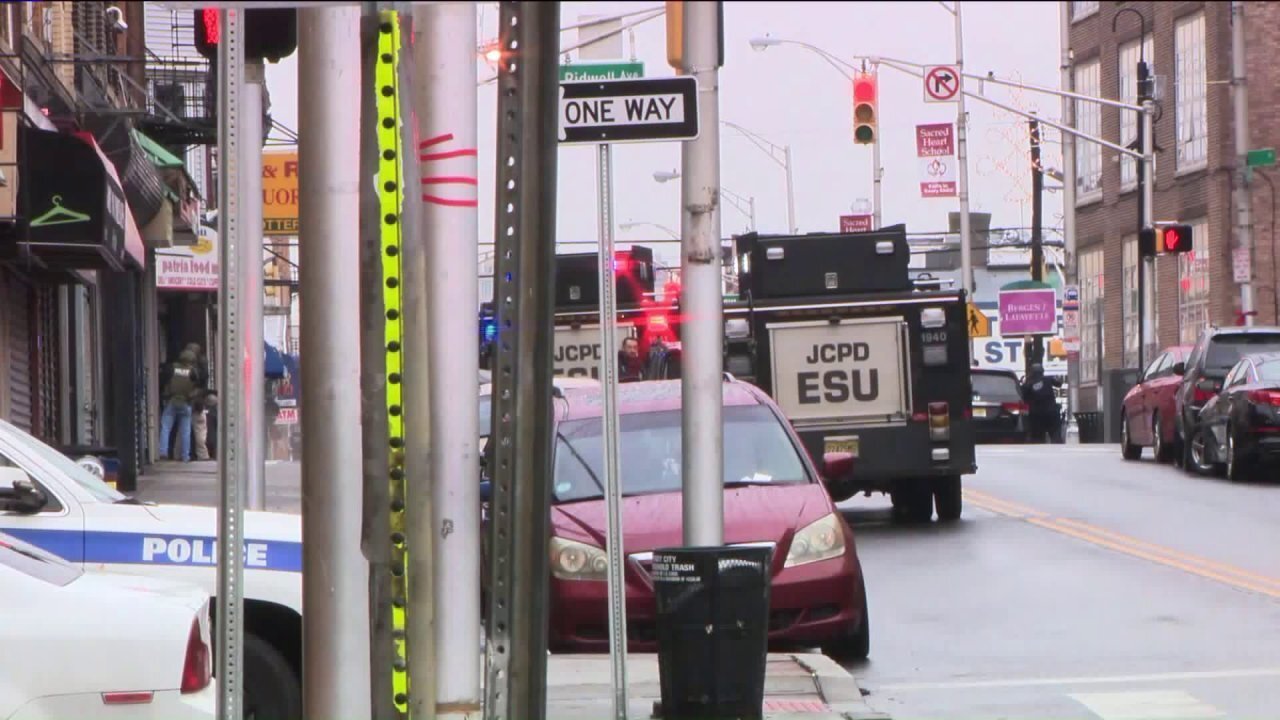 CNN affiliates reported that the shooting occurred in the area of Martin Luther King Drive in Jersey City, across the Hudson River from Manhattan. Several roads were closed and schools were on lock down.

CNN affiliates reported that the shooting occurred in the area of Martin Luther King Drive in Jersey City, across the Hudson River from Manhattan. Several roads were closed and schools were on lock down.

Francine Graham was an occasional babysitter in the West Harlem housing project where she grew up and former neighbors still remember her as polite and caring.

Decades later, when she settled into a townhouse complex in Elizabeth, New Jersey, Graham worked as a certified nurse’s aide for a health center run by the Catholic Church and looked out for ailing neighbors, according her former employer and residents who interacted with her.

“She was good people,” Edwin Lopez, 62, who exchanged pleasantries with her while walking his dog, Nike, at the Water’s Edge Crescent complex in Elizabethport. “You just never know who you’re living next to.”

Indeed, Graham, 50, and David Anderson, 47, are accused of killing a police detective near a Jersey City cemetery and then storming a nearby Jewish market on Tuesday. There, they shot and killed three people in what authorities said were acts of domestic terrorism “fueled by both anti-Semitism and anti-law enforcement beliefs.”

The hours-long police standoff ended with their deaths. For those who saw Graham as kind, normal and neighborly, it brought complete bafflement.

“That was not the Francine that I knew,” said Estelle Rodriguez, 73, who four decades ago moved to the 19th-floor apartment across from the Grahams in West Harlem’s Manhattanville Houses. “We were like family. She was always a loving girl.”

Click here for full coverage of the Jersey City shooting

Investigators believe shooters motivated by hate but acted on their own

Those refrains are common. Anderson’s former wife, who hadn’t spoken with him since 2003, expressed similar sentiments.

Still, a 2009 police report detailed a domestic-violence incident in which Anderson allegedly threatened to kill his then-girlfriend. Additionally, in two other cases from 2003 and 2007, Anderson was arrested for unlawful possession of weapons. In both cases, he pleaded guilty and was sentenced to jail, according to court records.

Graham, on the other hand, had no criminal history. She worked for nearly 20 years as a nurse’s aide at the Terence Cardinal Cooke Health Care Center in Manhattan, according to public records.

“We are stunned that an individual who was once associated with our ministry was involved in such a senseless and tragic act,” the New York Archdiocese-operated health center said in a statement, adding it was cooperating with investigators.

“We continue to pray for those who were killed or injured, for their loved ones, and for the Jersey City Police Department and other law enforcement agencies as they themselves mourn.”

At the Manhattanville Houses, where Graham’s mother still lives, a man who answered the door at her apartment said the family had no comment.

Anderson looked “like he was mad with the world all the time,” former neighbor says

New Jersey Attorney General Gurbir Grewal said Anderson and Graham expressed interest in the Black Hebrew Israelites movement, but authorities have not found any definitive links between them and that organization or other group.

Investigators believe the shooters were motivated by hate and acted on their own. It’s not known why Anderson and Graham attacked the detective and the kosher supermarket in particular, according to Grewal.

On Tuesday, a man and woman identified as Anderson and Graham were captured on surveillance footage firing on the kosher market, authorities said. Anderson emerged from a U-Haul van, leaving the driver’s door ajar. Graham jumped out the passenger side.

Anderson stepped across the street, his rifle pointed at the market, the footage showed. Bursts of gunfire erupted as he advanced. Graham, also carrying a long gun, followed behind.

At the door to the market, Anderson stopped and looked back at Graham. They then sprayed the market with bullets, authorities said. He used an AR-15-style weapon; she had a Mossberg 12-gauge shotgun. Other firearms and a pipe bomb were recovered.

Graham had purchased the shotgun and a Ruger firearm in Ohio in the spring of 2018, according to the attorney general.

“I was shocked it was her,” said Larry Baisden, 56, who lives across the street from the apartment Graham once shared with Anderson.

“She didn’t seem like that kind of person. But him. I didn’t know him… He always stood by the fence and he would stare out and look like he was mad with the world all the time.”

Graham and Baisden, who has lived at New Jersey townhouse complex for nine years, usually talked when they were at the outdoor mailboxes in the middle of their block. After he fell and broke his hip last year, he said, she revealed her background as a home health aide.

“She let me know if I needed any help with anything … to just come over to the door and let her know,” he said.

Neighbors said Graham, whom public records show took out a mortgage on her Elizabeth townhouse apartment in 2011, used to stand outside to smoke cigarettes. She always offered greetings and small talk. She did walking exercises with her upstairs neighbor, according to Baisden and other neighbors.

“She was always friendly and nice when I saw her,” he recalled.

In an apartment next to the townhouse where Graham lived, FBI agents this week showed up at the door of a neighbor who identified himself as Drake Surjet, 22, he said. Serge has lived there about three years. An agent showed him Graham’s photo and asked whether he had heard of the shooting in Jersey City, he said. They asked about her accomplice.

“Yes, there was that weirdo that moved in with her,” Surjet said he told them.

Around 2017, when Anderson first appeared at the complex, Graham’s life appeared to go “downhill,” according to Surjet. After Anderson moved in, chanting and rituals could be heard in the apartment at night, he said.

Graham told neighbors she stopped working that year after suffering a back injury, Surjet said.

“She was always been talking about, ‘I need a boyfriend. I want a boyfriend and it’s so hard for me to get one,'” he recalled. “That’s what she used to tell us … I guess he took advantage of that.”

In 2018, Graham defaulted on her mortgage, public records show. After getting evicted, Surjet said, the couple started living out of Anderson’s white van, which would be parked on a side street outside the apartment entrance. Sometimes they would break in to shower, he said.

“Honestly, she was just a nice lady that used stand outside and smoke her cigarettes,” Surjet said. “If she saw you, she’d say, ‘Hi, how are you doing?’ Then she would go inside and live her life. Until she met that guy.”

Neighbor remembers a young Graham running through the corridor

About 30 miles northeast of Elizabeth, Estelle Rodriguez was at a West Harlem supermarket this week when a neighbor told her Graham had been shot and killed in the Jersey City rampage.

“I felt sick,” Rodriguez said. “I couldn’t finish shopping. This was not the person I knew.”

Rodriguez said she last saw Graham at the Manhattanville Houses about a year ago. Graham told her she had been caring for her ailing mother. Rodriguez recalled a 10-year-old Graham running through the building corridor with the open terrace that overlooked wide tree-lined paths.

“These are good people,” she said of Graham’s family. “No one here will tell you anything bad about her or parents. I’m not justifying what she did.”

Down the hall, Alice Harriot, 67, said Graham, in her 20s, used to occasionally take care of her children. Graham’s mother used to pick up her kids at school, Harriot said.

She has lived there for close to a half-century. Harriot said she still exchanges Christmas cards with neighbors, including the Grahams.

“I couldn’t even eat, I was so distraught,” Harriot said of her reaction to seeing Graham’s photo on the TV news. “I was so disappointed. The disbelief. I prayed to go to sleep. That’s how hurt I was.”