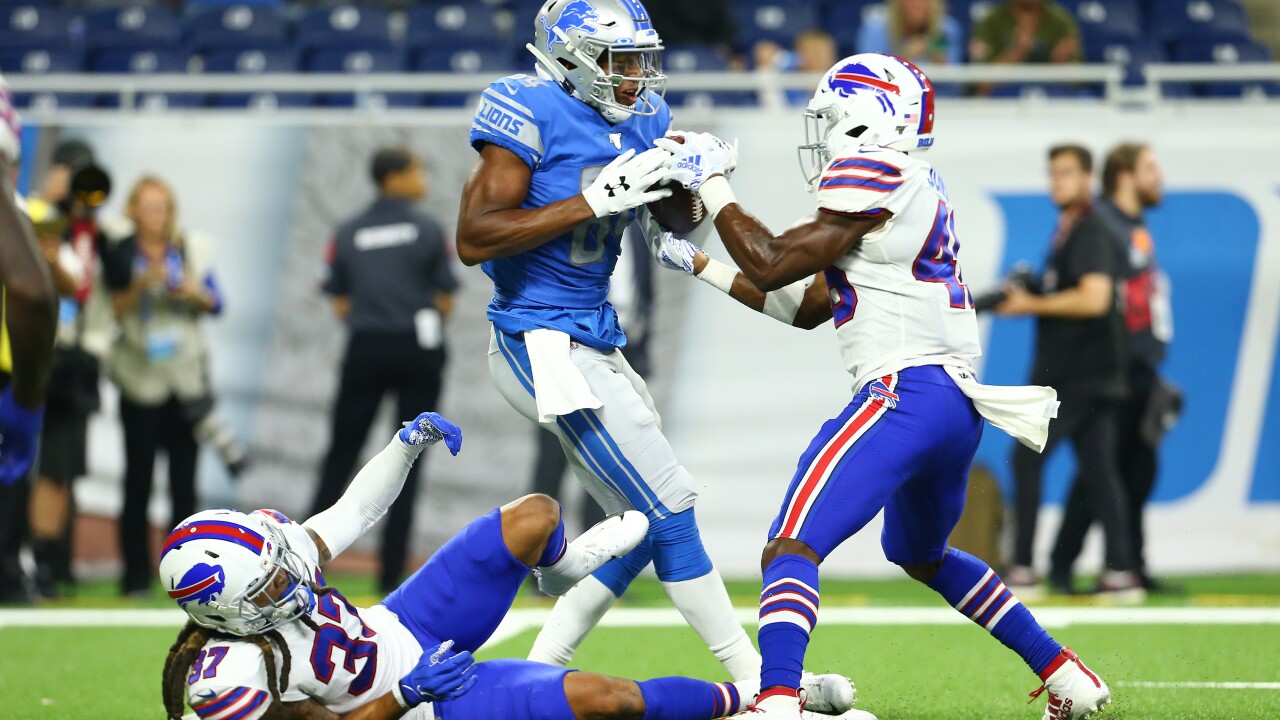 DETROIT, MI – AUGUST 23: Jaquan Johnson #46 of the Buffalo Bills takes the ball away from Travis Fulgham #84 of the Detroit Lions in the fourth quarter during the preseason game at Ford Field on August 23, 2019 in Detroit, Michigan. (Photo by Rey Del Rio/Getty Images)

ALLEN PARK, Mich. – The Detroit Lions have turned to a pair of former ODU Monarchs for help at the wide receiver position.

Fulgham became just the second Monarch in school history to be drafted after being selected by the Lions in the sixth round (184th overall) of the 2019 NFL Draft. This marks his second stint on Detroit’s active roster, which he was also on the first three games of the season before being signed to the practice squad Week 4.

Fulgham, who began his career at ODU as a walk-on, tallied 1,083 receiving yards in 2018, the second-best single season output by a Monarch in program history.

The Ashburn, Va. native finished with 2,044 career yards. He finished with 128 receptions and 18 touchdowns in his four-year career in Norfolk. Fulgham was the first offensive player in school history to play in the Reese’s Senior Bowl along with teammate Oshane Ximines, as well as participate as teammates at the NFL Combine.

Duhart is beginning his second stint of the season on the Lions’ practice squad. He originally joined Detroit in 2019 as an undrafted rookie free agent.

During his 2018 season at ODU, Duhart led Conference USA with 74 receptions and finished third in the league with 1,045 yards and nine touchdowns.

He teamed with Travis Fulgham to become the first ODU teammates to record 1,000 receiving yards in the same season. He earned second-team All-Conference USA honors.

A native of Midlothian, Virginia, Duhart ranks fourth in school history in career receptions with 183, receiving yards with 2,664 and touchdown catches with 28.

The Lions have signed WR Travis Fulgham to the active roster from the practice squad.

In addition, the team announced that they have placed DL Da’Shawn Hand on Reserve/Injured and signed free agent WR Jonathan Duhart to the practice squad: https://t.co/Dilsl1lAGu pic.twitter.com/DwLm0TRJcG