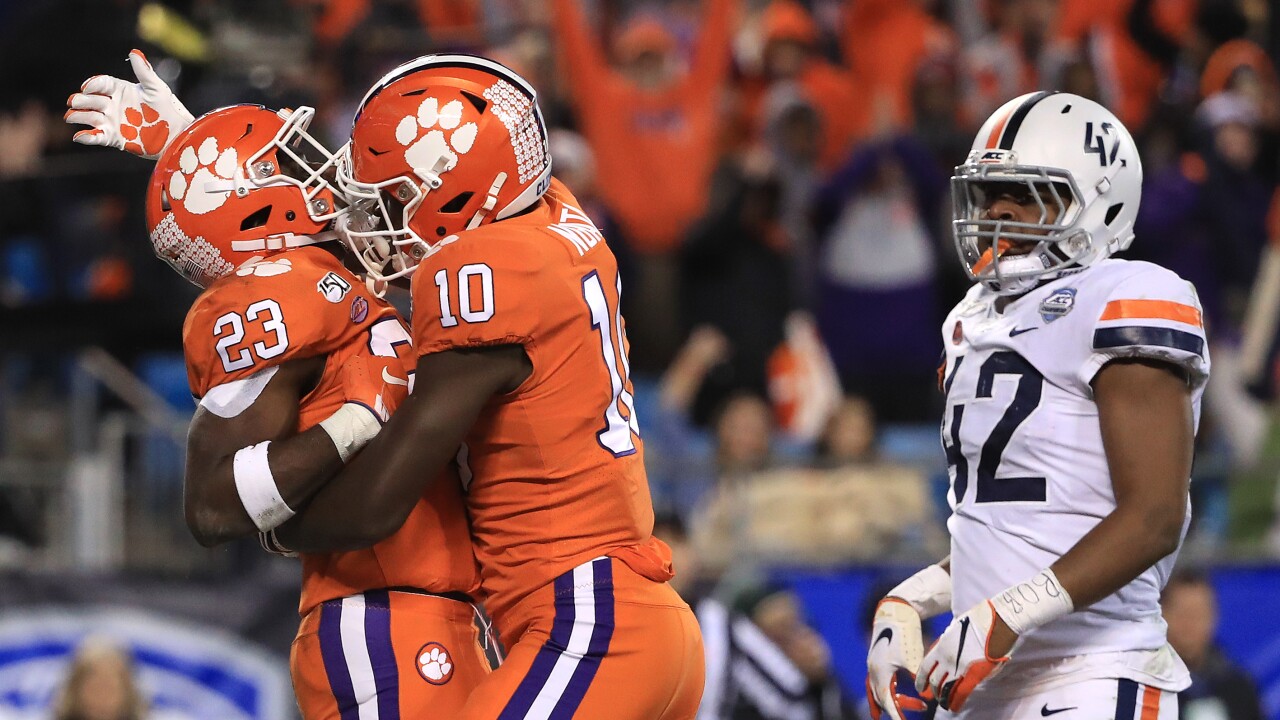 CHARLOTTE, NORTH CAROLINA – DECEMBER 07: Nick Jackson #42 of the Virginia Cavaliers watches as teammates Lyn-J Dixon #23 and Joe Ngata #10 of the Clemson Tigers celebrate a touchdown by Dixon during the ACC Football Championship game at Bank of America Stadium on December 07, 2019 in Charlotte, North Carolina. (Photo by Streeter Lecka/Getty Images)

Virginia had the most yards of total offense, with 387, against Clemson this year. The Cavaliers had 283 passing yards and 104 rushing. Clemson finished with 619 total yards. Virginia led the game in time of possession with 33:14. UVA’s defense had seven tackles for loss for 42 yards.

HOW IT HAPPENED
Clemson scored first, but Virginia tied it up 7-7 with a 20-yard touchdown pass from QB Bryce Perkins (Queen Creek, Ariz.) to WR Hasise Dubois (Irvington, N.J.). Clemson had a 31-7 lead at the half.

NOTES
• QB Perkins passed for 266 yards, becoming only the second quarterback to throw for 3,000+ yards in a season, joining Kurt Benkert (3,207; 2017).
• Perkins broke Benkert’s UVA single-season passing record in the fourth quarter. Perkins owns the UVA single-season passing record with 3,215 yards.
• With 58 rushing yards, Perkins passed “Bullet” Bill Dudley (1,631) for No. 1 on UVA’s career rushing list by a quarterback. Perkins now has 1,668 career rushing yards.
• WR Dubois finished with 10 receptions for 130 receiving yards. The 10 receptions are a career high.
• The 130 receiving yards by Dubois is the most given up by Clemson to one receiver this season.
• WR Billy Kemp finished with a career-high nine receptions and 66 receiving yards.
• FS De’Vante Cross notched his first career sack in the first quarter.

UP NEXT
Virginia will find out which bowl game it will play in on Sunday, Dec. 8.