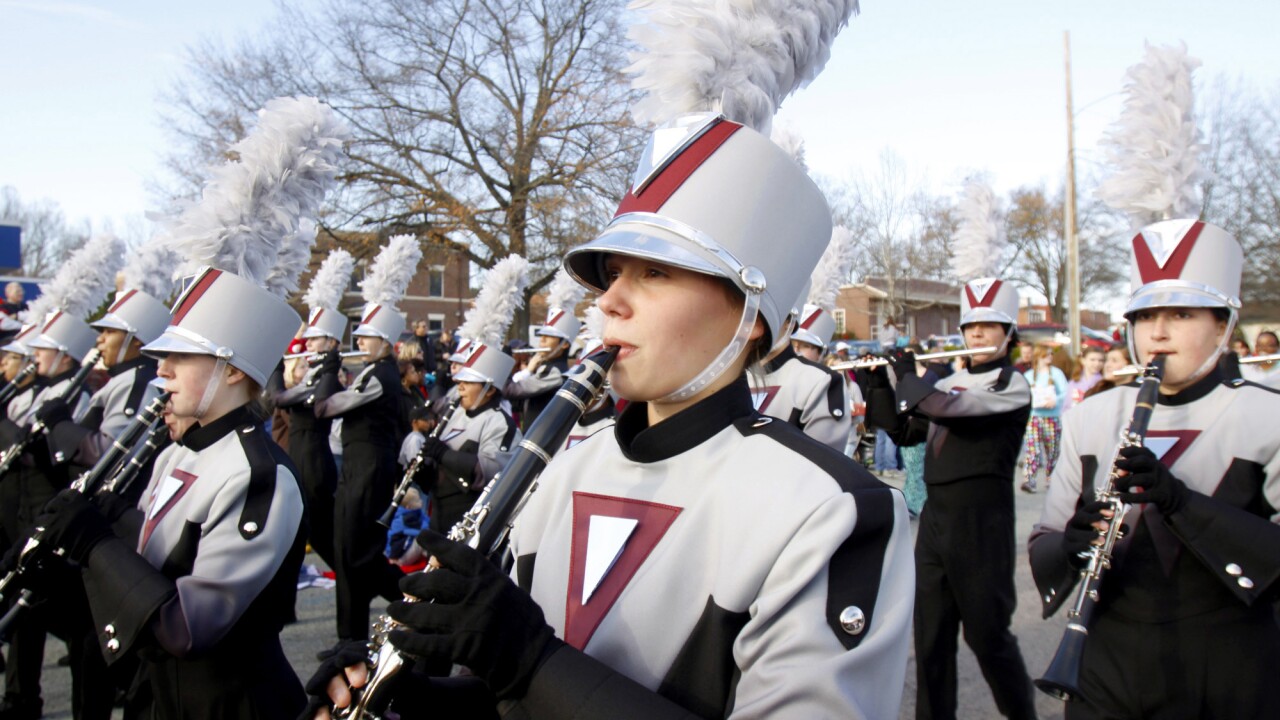 Amanda McCarl performs on clarinet as the Wakefield marching band performs during the Christmas parade in Wake Forest on Saturday, Dec. 10, 2011. The Wake Forest Christmas Parade was scheduled for Dec. 14 but has been cancelled. (Ray Black III/Raleigh News & Observer/Tribune News Service via Getty Images)

The Christmas parade in Wake Forest, North Carolina, has been a local tradition for more than 70 years. But this year, it’s being canceled because of safety concerns following the participation of local Confederate sympathy groups.

The city of 44,000 just outside the state capital of Raleigh announced the cancellation Wednesday due to the “potential for violence,” according to a news release by the town.

The Sons & Daughters of the Confederacy has participated in Wake Forest’s Christmas parade for more than 20 years. They typically appear in period costumes with a banner that includes an image of the Confederate flag.

This year, Wake Forest police reported receiving information that outside groups planned on attending the parade to either protest or support the Confederate group, the release said. This led to concern that residents attending, particularly children, would be put in danger if violence broke out.

“Groups that contact us about their plans to protest tend to follow our rules and regulations,” said Wake Forest Police Chief Jeff Leonard in a statement. “We’re concerned about outside agitators that don’t notify us. Radicals don’t typically call ahead. These aren’t area residents we’re talking about. These are professional protesters who have no regard for the safety and well-being of others.”

Wake Forest Mayor Vivian Jones expressed disappointment in the cancellation in a video message, but she assured residents the parade would be back on for 2020.

“Even though I don’t like it personally, at this point, the risk of moving forward with the parade simply outweighs any possible reward,” she said.

Another NC town also canceled its parade for the same reasons

Amanda McCarl performs on clarinet as the Wakefield marching band performs during the Christmas parade in Wake Forest on Saturday, Dec. 10, 2011. The Wake Forest Christmas Parade was scheduled for Dec. 14 but has been cancelled. (Ray Black III/Raleigh News & Observer/Tribune News Service via Getty Images)

Wake Forest isn’t the first town to cancel its annual tradition for these reasons.

Garner, a city of 30,000 people also located outside of Raleigh, canceled its Christmas parade last week. In the announcement, city officials said the decision was made “due to concern that the event could be targeted for disruption.”

The Twitter page of “Move Silent Sam,” a group dedicated to removing Confederate memorials across North Carolina, tweeted about Garner’s Christmas parade before the cancellation. It cited the participation of the group, Sons of Confederate Veterans. SCV has participated in the parade in previous years.

“Here are the Sons of Confederate Veterans in the 2018 Garner Christmas Parade,” the group tweeted, along with a video. “Is the Town of Garner trying to send the message that racism is welcome in the community?”

On November 27, two days after the tweet was made, the town canceled its parade.

That same day, Wake Forest released a statement that explained why the town would still proceed with its own parade.

Officials said they understood the emotions regarding both sides of the debate surrounding the Confederate flag. The parade is officially held by a local nonprofit, Wake Forest Downtown, but the city is the group’s legal partner to facilitate the parade. The city consulted attorneys in 2018 about excluding some groups but were told it had no legal basis to exclude any group based on the flag or symbol they display, the statement said.

The statement said that some may have difficulty accepting this, but “the uncomfortable fact remains there are no easy answers and no convenient solutions” to issues like this.

“Rather than allow this wonderful holiday tradition to become political and divisive, let’s instead commit ourselves to viewing it as an opportunity to come together as a community,” the statement read.

The cancellation announcement came just a week after that statement’s release.