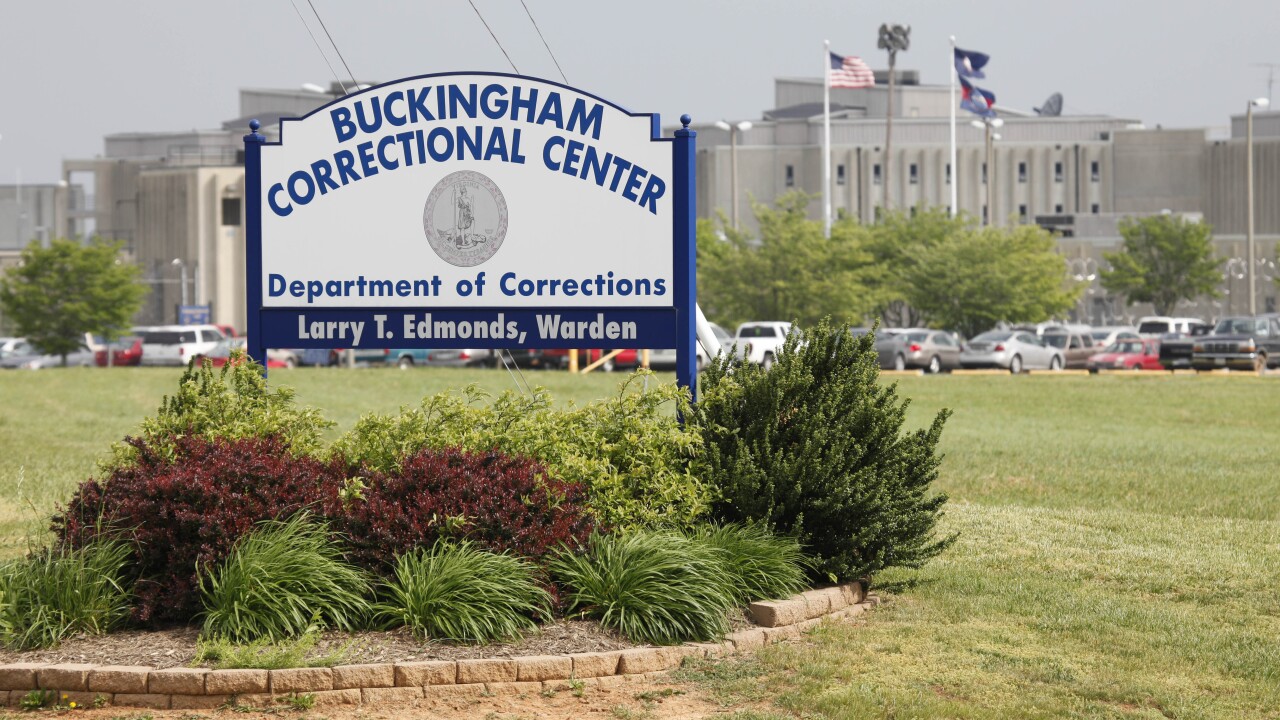 This May 3, 2011 photo shows the entrance sign to the Buckingham Correctional Center in Dillwyn, Va. Ophelia De’lonta who is imprisoned at the facility has filed a lawsuit against Virginia Prison officials seeking a sex change operation. (AP Photo/Steve Helber)

An 8-year-old girl visiting her father at a Virginia prison was strip searched last month in violation of state policy, authorities said.

“The incident is deeply troubling and represents a breach in our protocol,” said Lisa Kinney, a spokeswoman for the Virginia Department of Corrections, in a statement to CNN. “We sincerely apologize to this child and her family.”

The child was visiting her father, who is an inmate at Buckingham Correctional Center, Kinney said. The girl was accompanied by an adult visitor who was not her parent or legal guardian.

The staff member who ordered the search didn’t have the authority to do so and is facing disciplinary action, Kinney said.

This May 3, 2011 photo shows the entrance sign to the Buckingham Correctional Center in Dillwyn, Va. Ophelia De’lonta who is imprisoned at the facility has filed a lawsuit against Virginia Prison officials seeking a sex change operation. (AP Photo/Steve Helber)

The Virginia Department of Corrections would not confirm the relationship between the adult visitor and the child’s incarcerated father, but The Washington Post reported the girl was accompanied by her father’s girlfriend.

The staff member requested the search because a drug-sniffing dog flagged the daughter and the adult accompanying her, which is department policy.

Department of Corrections policy requires that a parent or legal guardian approve the strip search of minors. In this case, the unrelated adult visitor signed off, against policy, Kinney said.

The Virginian-Pilot reported that the father’s girlfriend was initially told that the daughter would not be strip searched but the decision was reversed after guards consulted with an officer. The newspaper also reported the girlfriend informed prison guard’s that she was not the girl’s mother or guardian.

“I am deeply disturbed by these reports — not just as Governor, but as a pediatrician and a dad,” Northam said in a statement. “I’ve directed the Secretary of Public Safety and Homeland Security to suspend this policy while the Department conducts an immediate investigation and review of their procedures.”

Kinney said the state is only temporarily suspending the policy as it regards to minors, pending further review.

“Strip search policies for visitors to prisons are in place to keep offenders, visitors, and staff as safe as possible by reducing the contraband (e.g., drugs, cell phones, weapons) smuggled into the state’s prisons. Strip searches are requested when a K-9 has alerted on a visitor. Visitors are always free to deny the strip search and leave the facility.”

The ACLU of Virginia said that visitors who choose to deny the search can lose visiting privileges.

“If you deny that invasive search request, you’re at risk of having your visiting privileges permanently or temporarily suspended,” women’s rights lawyer Nicole Tortoriello said. “We think this is a very coercive policy.”

Even if the visitor consents to the search and nothing is found, the mere fact that they were flagged for a search means they will not be allowed physical contact with the prisoner they’re visiting that day, Tortoriello said.

“Children should never in any circumstances be subjected to an invasive, humiliating, traumatizing strip or cavity search administered by strangers while attempting to visit a loved one in a correctional facility,” Tortoriello said.

The Virginia Department of Corrections had previously been under fire for proposing that visitors be banned from using tampons, menstrual pads, or other menstrual products. While the state suspended the proposed ban in 2018, the ACLU of Virginia sent letters to Buckingham Correctional Center and other jails, alleging that they had received complaints they were still detaining visitors who used menstrual products.

CNN has not been able to identify the mother of the child. The girlfriend did not respond to multiple requests for comment from CNN.