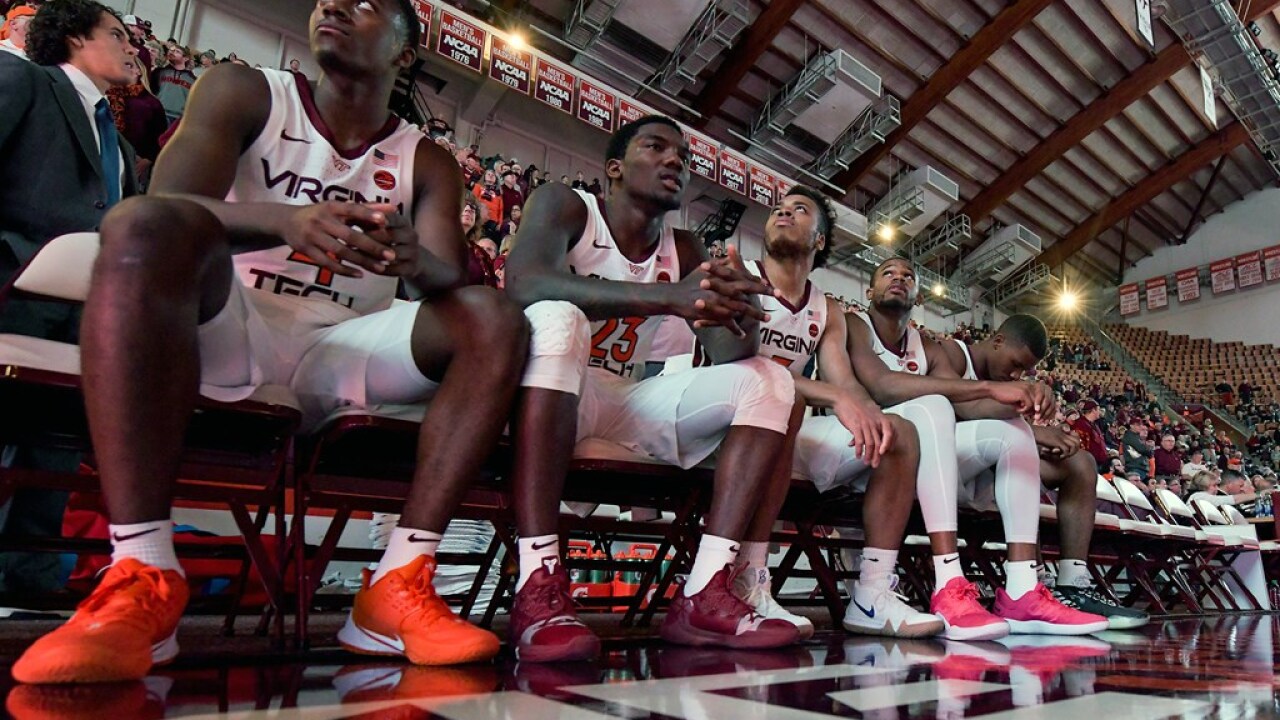 BLACKSBURG – Virginia Tech led No. 10 Duke at halftime, but couldn’t hold on, as the Blue Devils turned up the defensive pressure in the second and used Tre Jones’ team-high 15 points to knock off the Hokies 77-63 in an ACC game played Friday night at Carilion Clinic Court.

Tech grabbed a 45-38 lead on a layup by Nahiem Alleyne with 19:01 remaining. Duke called a timeout and went to a smaller lineup and that worked, as the Blue Devils went on a 12-2 run, taking a 50-47 lead on two free throws and a layup by Wendell Moore.

The Hokies retook the lead when P.J. Horne hit a 3-pointer with 11:11 left, but the Blue Devils scored the next four points and never trailed again. Tech went cold from the field, hitting just two field goals over a span of more than nine minutes, and a 17-2 Duke run in the final nine minutes sealed the game for the Blue Devils.

Tech shot 48.2 percent from the floor, but made just 9 of 22 in the second half. The Hokies struggled from beyond the 3-point arc, hitting just 5 of 20 for the game, and they turned the ball over 14 times.

Horne led the Hokies with 15 points, hitting 6 of 13 from the floor, including three 3-pointers. Wabissa Bede and Tyrece Radford scored 12 each for Tech, while Vernon Carey and Moore scored 12 each for the Blue Devils, who shot 50 percent in the second half.

QUOTES TO NOTE
Virginia Tech head coach Mike Young
(On the difference between the first and second halves)
“It’s a three-point game with 8 [minutes to play]. We’re in great shape. A five-point game with 7-something left. We didn’t respond very well from that point. It could not have played out any better in terms of how we wanted to play. I thought our team did a very nice job on Carey. That was the only choice we had [to double team him]. [Jordan] Goldwire makes two 3’s because of how we got to play, and they made six first-half 3’s. There was another one that was a tad unexpected, but to their credit, they stepped up and made that shot. I think Carey had 12. We probably fouled him down there a couple of times, and it wasn’t called, but I it played out pretty darn well. I’m disappointed in how we finished the thing.”

• Horne has hit at least two 3-pointers in five of the Hokies’ nine games this season and is shooting 51.5 percent from beyond the 3-point arc.

• Radford’s 12 points were a career high.

UP NEXT
The Hokies return to action Wednesday when they take on Chattanooga at Carilion Clinic Court. The game tips off at 8:30 p.m.