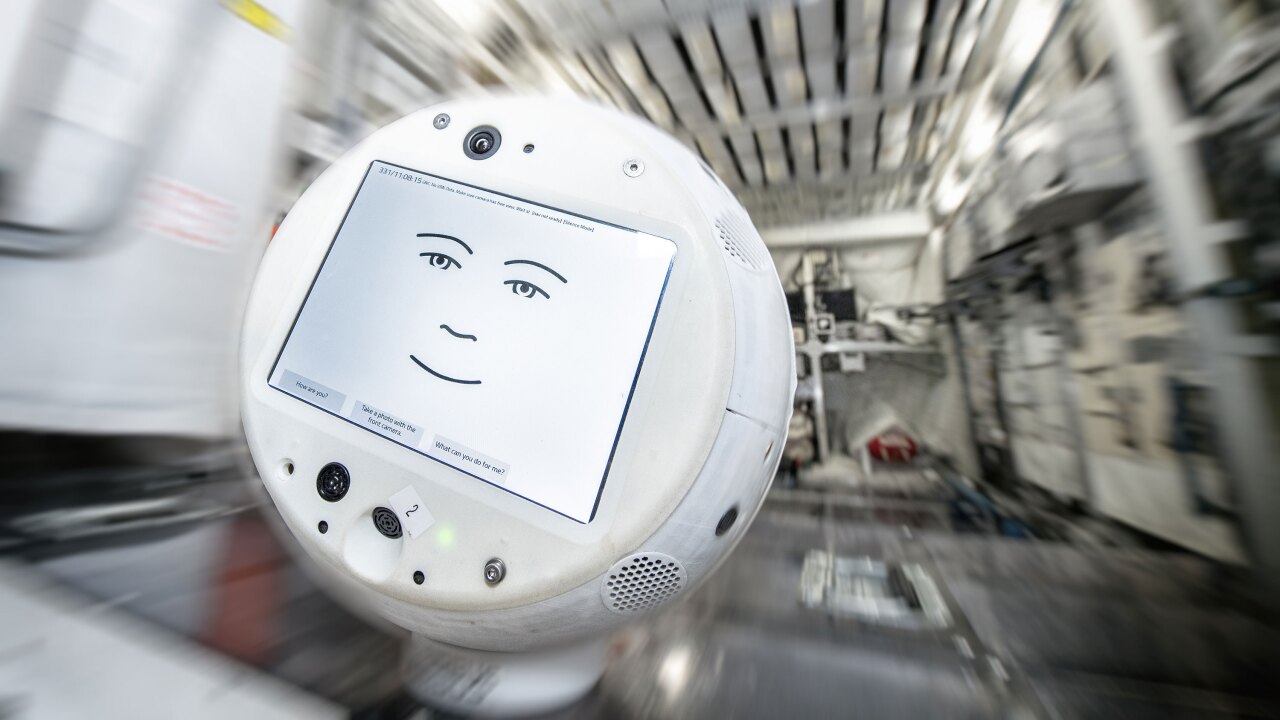 The first mobile astronaut assistant in space, CIMON, has a sibling: CIMON 2. It is shown here during tests in the Columbus mock-up at the European Astronaut Centre in Cologne. CIMON 2 was launched to the International Space Station on 4 December 2019 on board a SpaceX-19 rocket from Cape Canaveral in Florida. Credit: DLR (CC-BY 3.0)

On Sunday, SpaceX’s Dragon capsule will dock at the International Space Station, bringing supplies, experiments including “mighty mice” — oh, and a friendly robot to keep the astronauts company for the next three years.

The first mobile astronaut assistant in space, CIMON, has a sibling: CIMON 2. It is shown here during tests in the Columbus mock-up at the European Astronaut Centre in Cologne. CIMON 2 was launched to the International Space Station on 4 December 2019 on board a SpaceX-19 rocket from Cape Canaveral in Florida.
Credit: DLR (CC-BY 3.0)

CIMON-2 is the next generation of the Crew Interactive Mobile Companion. The robot was built by Airbus at the German Aerospace Center and uses IBM artificial intelligence based on Watson technology. It’s designed for human interaction and to help the astronauts with tasks as it autonomously navigates around the European Columbus research module on the space station.

European Space Agency astronaut Alexander Gerst performed and recorded a 90-minute demonstration with CIMON that showcased the robot’s ability to fly freely around the station and play music. Its “smart face” was able to spot and recognize Gerst, make eye contact and carry on a conversation with him. The robot also helped provide instructions and took video and images of Gerst.

Because CIMON can record the astronauts, it caused a question of ethics concerning what CIMON can share and say.

“The new CIMON has a built-in switch that enables the data streams from all cameras and microphones to be interrupted from the ISS. The astronaut has control over CIMON at all times, which was especially important for us,” said Judith Buchheim, a researcher at Ludwig-Maximilians University in Munich and part of the team of physicians who evaluated the ethics of the experiment.

Related: The story behind the first batch of cookies in space and the first zero-gravity oven

CIMON returned to Earth in August, and the German Aerospace Center Space Administration determined that his first outing was a success. CIMON-2 was already in the works, full of upgrades that were deemed necessary during the first robotic test.

“It is planned that CIMON-2 will stay on the ISS for up to three years and support the crew,” said Till Eisenberg, CIMON Project Manager at Airbus. “CIMON-2 has more sensitive microphones and a more advanced sense of orientation. The AI capabilities and stability of the complex software applications have also been substantially improved.”

This extended stay will allow CIMON’s design team to evaluate how the robot could be utilized during future missions, like uploading its AI to a cloud on the space station to create a completely autonomous assistance system.

“When it was first deployed on the ISS, CIMON proved that it could understand not only the content within its given context, but also the intention behind it,” said Matthias Biniok, IBM’s Lead Watson Architect for Germany. “CIMON-2 goes one step further. With the help of the IBM Watson Tone Analyzer from the IBM cloud in Frankfurt, it is now able to evaluate the emotions of the astronauts and respond to the situation in an appropriate way if this is desired by the astronauts, or if its emotional analysis capabilities are being tested as part of an experiment. This allows CIMON-2 to transition from a scientific assistant into an empathetic companion, as required.”

CIMON gets his name from a reference to Professor Simon Wright, the “flying brain” robotic assistant from the Japanese “Captain Future” sci-fi series. He was created with the ability to understand, speak, hear and see. He can even nod and shake his head — which is essentially all CIMON’s body consists of.

In the beginning, the 3D printed plastic was called a “spaceball” by its engineers.

He was initially designed to help astronauts efficiently complete their work by explaining instructions and information for repairs and experiments, offering hands-free access to documents and media and acting as a mobile camera. He can also document experiments, search for items and take inventory.

But CIMON can also be a conversational companion for lonely astronauts.

“Studies show that demanding tasks are less stressful if they’re done in cooperation with a colleague,” Biniok said.

CIMON uses two cameras as its eyes for facial recognition and five others to help him autonomously navigate and record video.

But CIMON relies on human interaction to learn. Microphones help it interpret voices and identify its location while fans help it rotate and turn to face astronauts when called. Psychologists helped CIMON develop a personality, and it can respond using different tones, from teasing to sad.

Myers-Briggs classifications are responsible for his introverted, sensing, thinking and judging personality.

His personality has been on display before. During his demonstration with Gerst, CIMON asked the astronaut to “not be mean” when the robot was playing music and Gerst asked him to stop.

And for anyone having flashbacks to Hal from “2001: A Space Odyssey,” astronauts can even ask CIMON what he thinks about the sci-fi AI and he’ll respond with “I’m afraid I cannot do that” in the same eerie tone.

The robot has other potential uses for future space missions.

“With CIMON-2, we are looking to build on the successful CIMON demonstration,” said Christian Karrasch, the CIMON Project Manager at the German Aerospace Center Space Administration, in a statement. “On a journey to the moon or Mars, the crew would be able to rely on an AI-based assistance service, without a permanent data link to Earth. One specific application for Earth, for instance, would be helping people to perform complex tasks in areas with poor infrastructure.”