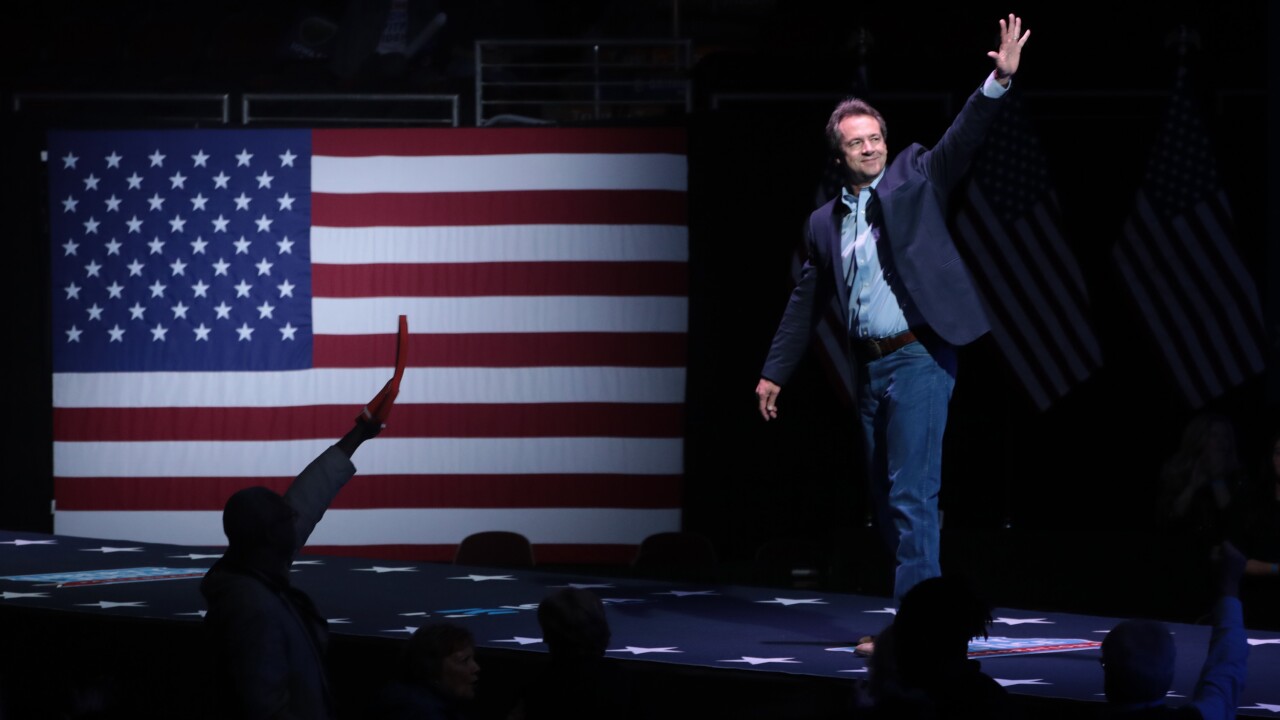 DES MOINES, IOWA – NOVEMBER 01: Democratic presidential candidate Montana governor Steve Bullock speaks at the Liberty and Justice Celebration at the Wells Fargo Arena on November 01, 2019 in Des Moines, Iowa. Fourteen of the candidates hoping to win the Democratic nomination for president are expected to speak at the Celebration. (Photo by Scott Olson/Getty Images)

DES MOINES, IOWA – NOVEMBER 01: Democratic presidential candidate Montana governor Steve Bullock speaks at the Liberty and Justice Celebration at the Wells Fargo Arena on November 01, 2019 in Des Moines, Iowa. Fourteen of the candidates hoping to win the Democratic nomination for president are expected to speak at the Celebration. (Photo by Scott Olson/Getty Images)

Montana Gov. Steve Bullock ended his presidential campaign on Monday, the Democrat announced in a statement to CNN.

The decision comes after the moderate Democrat failed to convince the party’s base that the best way to defeat President Donald Trump was by nominating someone who can win in a red state.

“Today, I am suspending my campaign to become the Democratic Party’s nominee for President,” Bullock said. “While there were many obstacles we could not have anticipated when entering this race, it has become clear that in this moment, I won’t be able to break through to the top tier of this still-crowded field of candidates.”

Bullock, who is term-limited as governor, will not take on Republican Sen. Steve Daines in 2020, his spokeswoman said.

“Governor Bullock will continue to faithfully and effectively serve the people of Montana as their Governor,” said Bullock spokeswoman Galia Slayen. “While he plans to work hard to elect Democrats in the state and across the country in 2020, it will be in his capacity as a Governor and a senior voice in the Democratic Party — not as a candidate for US Senate.”

Bullock had said he has no interest in the Senate job, despite being pressured to run, and outright ruled it out in interviews this year. But Bullock would not have been the first presidential hopeful to go from disdain toward the Senate to a possible bid: Former Colorado Gov. John Hickenlooper is now running for Senate in his home state, something he largely dismissed during his presidential bid.

Bullock entered the 2020 contest in May, far later than many of his Democratic opponents, a fact that complicated his early efforts to make the debate stage.

After missing the June debate, Bullock qualified for the July contest, using the platform to tout himself as a “pro-choice, pro-union, populist Democrat that won three elections in a red state, not by compromising our values but by getting stuff done.”

But the performance failed to garner much momentum for Bullock, who struggled for months to raise enough money to successfully run for president or garner enough support to get him into other debates.

Bullock was able to raise $4.3 million to fund his campaign throughout 2019. But the governor ended up spending much of that and entered the fourth quarter of 2019 with $1.3 million cash on hand, a number that paled in comparison to larger, better funded campaigns.

Bullock centered his campaign on his ability to court red state voters despite a progressive streak. His often talked about the need to get big money out of politics and told CNN before he announced his campaign that he hoped to convince voters in “places like a Montana or the Midwest” that “the Democratic party is fighting for their interests.”

Bullock said on Monday that he “entered this race as a voice to win back the places we lost, bridge divides and rid our system of the corrupting influence of Dark Money” and that even though he is ending his campaign, he leaves “this race filled with gratitude and optimism, inspired and energized by the good people I’ve had the privilege of meeting over the course of the campaign.”

Bullock had previously pledged to make it to the Iowa caucuses in February before dropping out, believing that Iowa could provide his campaign an upset moment and a way to go around the debate stage.

“There was polling that said, only one third of the folks even surveyed watched the debates,” he said. “It’s not like there’s anything coming out of these debates that are really changing people’s views.”

But that has proven not to be true, as candidates who have missed the debate stage have struggled to both gain attention and fundraise after missing a debate.