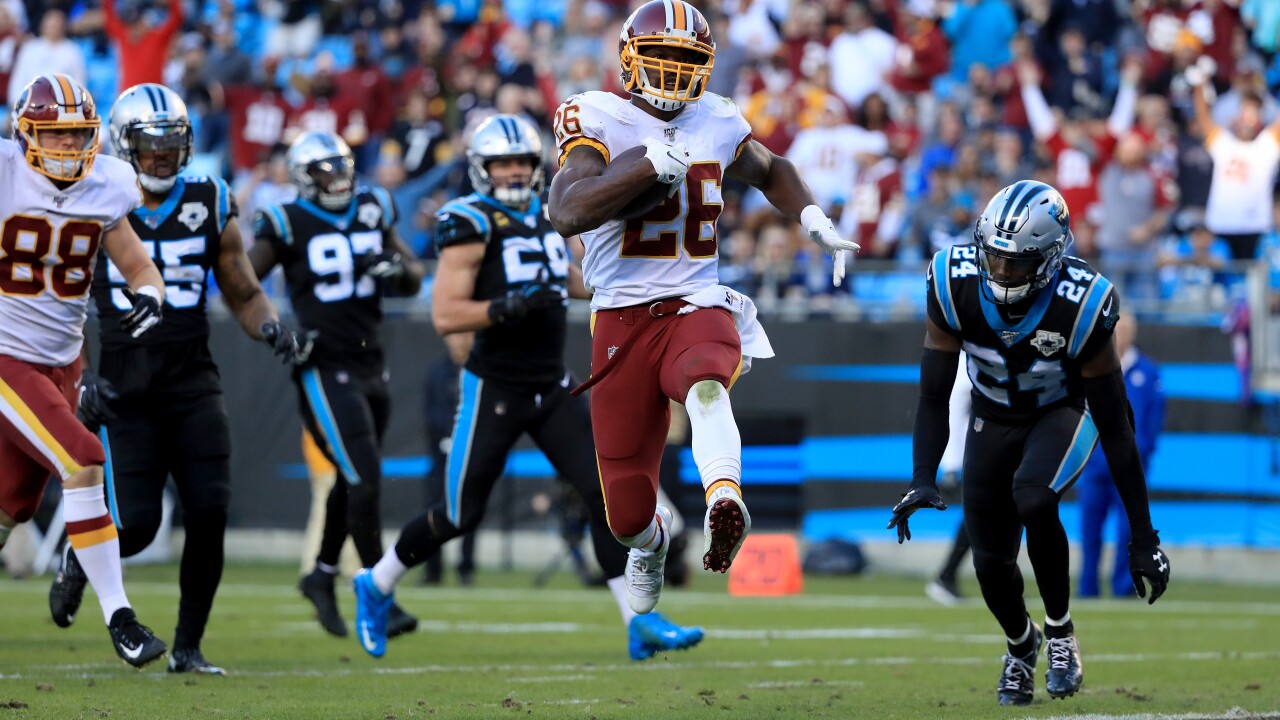 Adrian Peterson #26 of the Washington Redskins runs for a touchdown. (Photo by Streeter Lecka/Getty Images)

CHARLOTTE, NC – In what’s seen by many as a lost season, the Redskins delivered their best game of the season Sunday.

The Redskins used a dominant rushing attack and a smothering defense to score 29 unanswered points against the Carolina Panthers en route to their second straight victory, a 29-21 triumph at Bank of America Stadium. Washington improves to 3-and-9 on the season – and has yet to be officially eliminated from the playoffs.

Carolina scored touchdowns on its first two possessions, driving the Redskins into an early 14-0 hole. However, Washington stormed back behind three rushing touchdowns – two from Derrius Guice and one from Adrian Peterson. The Redskins, who rushed for a season-high 248 total yards for the game, had just two rushing touchdowns all season entering Sunday’s contest.

The Redskins defense stiffened up following the Panthers’ two touchdown drives. Washington sacked Carolina quarterback Kyle Allen seven times on the day and allowed just 278 total yards. However, the Panthers scored a touchdown and recovered an onside kick in the game’s final two minutes to make things interesting after the Redskins took a 29-14 lead late in the fourth quarter.

Rookie quarterback Dwayne Haskins earns his second career victory after completing 13-of-25 passes for 147 yards. He did not throw a touchdown nor commit a turnover.

Guice, the second-year running back, carries the ball 10 times for 129 yards and his first two career rushing touchdowns. According to STATS, Guice’s 12.9 yards/carry is the second best total in team history (Cliff Battles, 1933).

Washington plays at Green Bay next Sunday before finishing the season with three straight NFC East games: vs. Eagles, vs. Giants, at Cowboys.

Derrius Guice and Adrian Peterson are stoked after a huge day at Carolina. pic.twitter.com/BCGBpWPmCy

Derrius Guice goes over the 100-yard mark for the first time in his career! @DhaSickest #HTTR #WASvsCAR