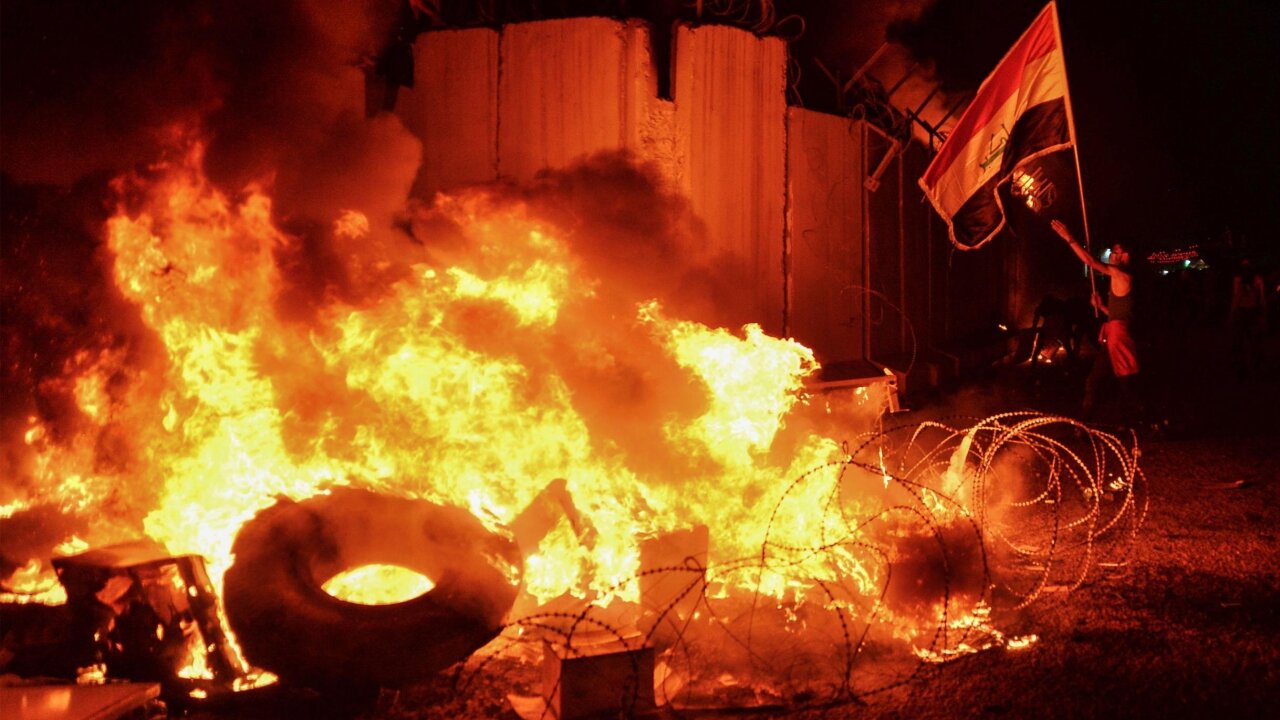 Iraqi demonstrators gather as flames start consuming Iran’s consulate in the southern Iraqi holy city of Najaf on November 27, 2019, two months into the country’s most serious social crisis in decades.

Iraqi Prime Minister Adil Abdul Mahdi has ordered an investigation into violence that has led to the deaths of at least 31 people this week in ongoing anti-government protests.

The Prime Minister’s office said in a statement Thursday that a dedicated committee will be formed, led by Abdul Mahdi’s military adviser.

It comes after Iran called on Iraqi authorities to respond “firmly and effectively” to protesters who attacked Tehran’s consulate in the southern city of Najaf on Wednesday.

Protests against alleged government corruption and a rejection of Iranian involvement in the country’s affairs have continued since October 1.

Iran’s Foreign Ministry spokesman Abbas Mousavi expressed “hatred” for the rioters who stormed and torched the consulate. Mousavi called on the Iraqi government to deal with the “perpetrators of the attack responsibly, firmly and effectively,” according to an Iranian foreign affairs ministry statement released on Thursday.

Iran’s diplomatic staff evacuated the consulate before the attack, state-run Islamic Republic News Agency (IRNA) said Thursday. This is the second attack on an Iranian embassy in Iraq after its office in the Shia holy city of Karbala was attacked last month.

Thirty-one people were killed and more than 1,000 injured over three days of demonstrations across Iraq from November 26 to November 28, the country’s Independent High Commission for Human Rights said Thursday.

On Thursday, 13 protesters were killed in the city of Nasiriya with 75 people injured, a security official and a medic told CNN on condition of anonymity, as they are not authorized to speak to the media. Authorities imposed a curfew on Nasiriya, which lies more than 200 miles southeast of Baghdad.

In total, more than 300 people have been killed and 15,000 injured in Iraq since the protests began. Protesters have demanded the government to step down and hold early elections under direct supervision of the United Nations, activists told CNN.

Many Iraqis blame the current political parties in power for their economic hardship. The scale of the protests, believed to be the biggest since the fall of former Iraqi President Saddam Hussein in 2003, took the government by surprise.

Abdul Mahdi agreed to resign on October 31. Besides using lethal force, officials have imposed curfews and internet blackouts in attempts to quash the protests. The government said it only shoots when attacked, but demonstrators have disputed that.