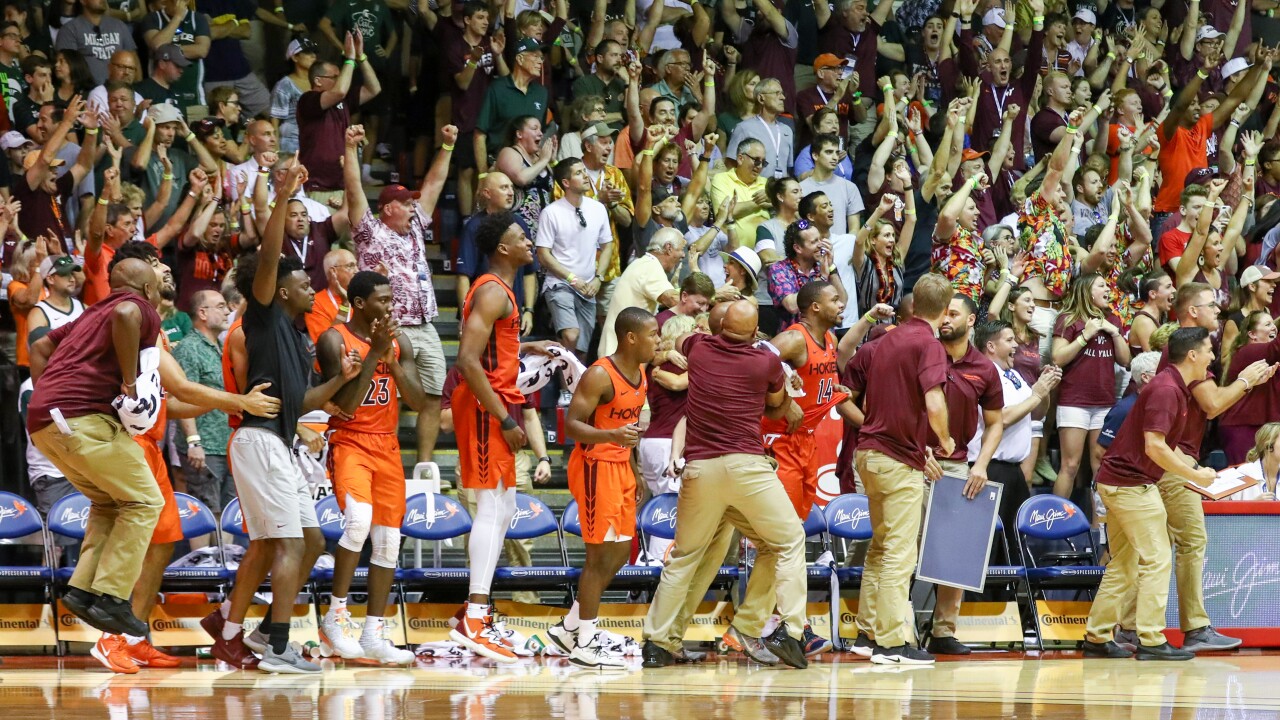 MAUI, Hawai’i (HokieSports.com) – In a barn-burner, the Virginia Tech men’s basketball team upset No. 3/3 Michigan State 71-66 on Monday in the first round of the Maui Jim Maui Invitational at the Lahaina Civic Center.

It marked Tech’s second straight win against the AP’s third-ranked teams, with it last beating then-No. 3 Duke last year in Blacksburg. And it marked Tech coach Mike Young’s highest-ranked opponent defeated, topping his win over No. 5 North Carolina in 2017.

Defensively, Tech forced 16 turnovers, which resulted in 20 points off those turnovers. The Hokies tallied eight steals and six blocks, causing havoc on the defensive end.

With under four minutes remaining in the first half, the Spartans led 25-24 when Nolley hit a 3-pointer to put Tech up 27-25, which was quickly followed by a triple from MSU to give them the lead back. But Alleyne answered with a three of his own and then Tech on the ensuing possession got a layup from Horne to give it a 32-28 advantage entering the break.

With a little over seven minutes to go in the second half, Tech led by two points at 51-49. Cattoor drilled a triple and Bede finished a paint lay-in to push the advantage to 56-49. Nolley capped off the 8-0 run with a 3-pointer to extend the lead to 59-49, causing a Spartan timeout.

Seeking a comeback, the Spartans cut the deficit to 63-61 with two minutes remaining in the game. Then Nolley drove in the lane and hit a contested jumper giving Tech a 65-61 lead. With under a minute to go, Nolley drilled a clutch 3-pointer from behind the arc, pushing the score to 68-64. Michigan State would not recover, though, as tech hit some free throws down the stretch to preserve the five-point win.

Opening statement:
“Proud of our team,” Tech coach Mike Young said. “We tried our best here against an exceptional Michigan State team. Defensively, I thought we kept them out of the paint. Easier said than done. Such length and size in there with Tillman and a couple of those other guys.

“I’ve got good players. It comes back to good players. That guy down there [Landers Nolley] made at least two, maybe three first half threes. This young man is a special basketball player and an old grizzled veteran up there at the top of the floor that kind of keeps things settled for us, and that would be Wabissa Bede.”

GAME NOTES
Nolley hit four 3s against MSU. The forward has now gone 21-for-46 from deep this season. Defensively, Nolley recorded career highs in steals with three and blocks with two.

Horne went 5-for-6 from the field and 2-for-2 from behind the arc against the Spartans. Horne grabbed seven rebounds, tying his season high.

Bede tallied five assists against Michigan State, with him now having 45 assists through the first five games of the season. Offensively, Bede posted a season-high 11 points.

For our written recap of the game 👇