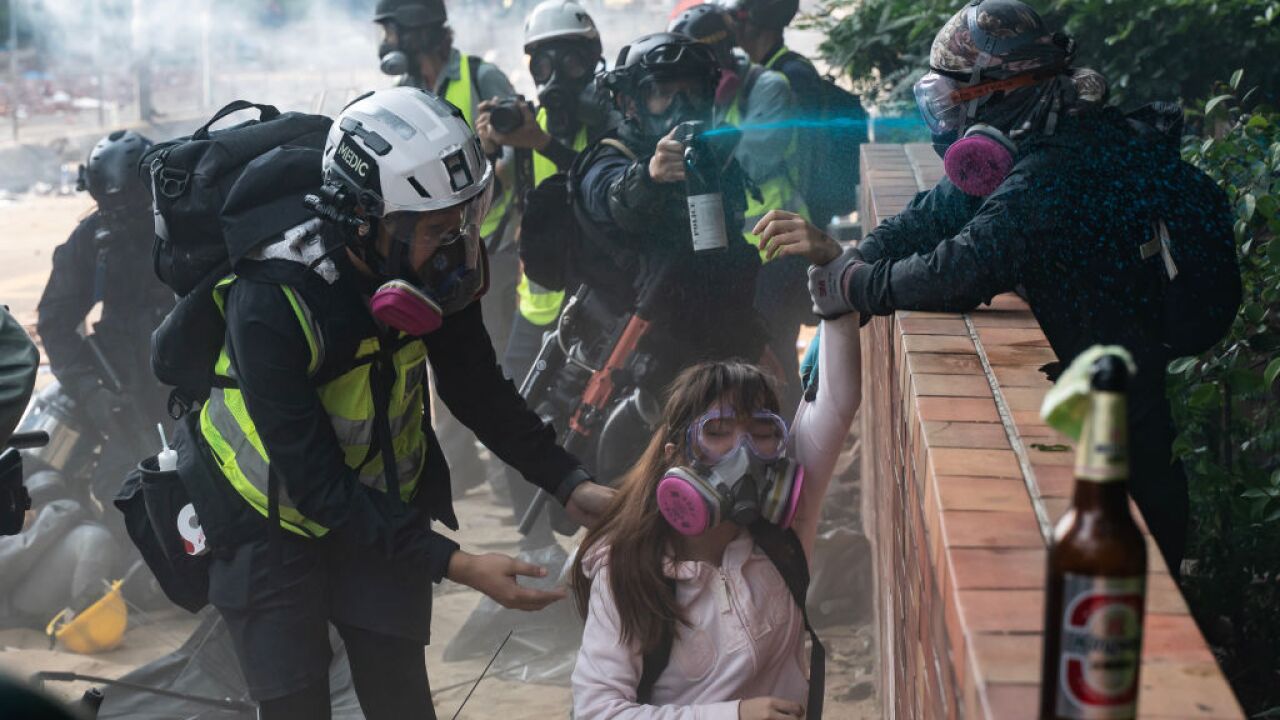 HONG KONG, CHINA – NOVEMBER 18: Protesters clash with police during an escape at The Hong Kong Poytechnic University on November 18, 2019 in Hong Kong, China. Anti-government protesters organized a general strike since Monday as demonstrations in Hong Kong stretched into its sixth month with demands for an independent inquiry into police brutality, the retraction of the word “riot” to describe the rallies, and genuine universal suffrage. (Photo by Anthony Kwan/Getty Images)

A small number of protesters remain trapped inside a Hong Kong university campus that was the site of a prolonged battle with police into the early hours of Monday morning.

HONG KONG, CHINA – NOVEMBER 18: Protesters clash with police during an escape at The Hong Kong Poytechnic University on November 18, 2019 in Hong Kong, China. Anti-government protesters organized a general strike since Monday as demonstrations in Hong Kong stretched into its sixth month with demands for an independent inquiry into police brutality, the retraction of the word “riot” to describe the rallies, and genuine universal suffrage. (Photo by Anthony Kwan/Getty Images)

The overnight drama at Hong Kong Polytechnic University (PolyU), in Hung Hom on the southern tip of the Kowloon peninsula, saw some of the most violent and dramatic scenes in almost six months of anti-government demonstrations.

Multiple arrests were made around the campus Monday, as protesters attempted to leave, only to be met with tear gas and rubber bullets. Those that were caught by police were often aggressively detained.

Photos and videos of the situation spread quickly on social media, with sympathy protests springing up around the city in an attempt to distract police and relieve pressure on those trapped inside the campus.

The threat of more violence continues to loom over the operation. On Monday afternoon, riot police were seen carrying what appeared to be assault rifles at a clearance operation in the nearby Jordan area of Kowloon. Police confirmed to CNN that the weapons were “ready to use.” The comments follow a statement Sunday in which police said they were prepared to fire live rounds if necessary.

Protesters have been holed up at the sprawling PolyU campus since last week, after an escalation in the months-long unrest which saw multiple universities across the city fortified and turned into temporary protest camps.

Protesters had used the PolyU campus as a base from which they launched operations to block nearby roads and the Cross Harbor Tunnel which connects Kowloon to Hong Kong Island.

The tunnel is the busiest of the city’s three harbor road crossings. According to 2017 government statistics, more than 110,00 vehicles use the Cross Harbor Tunnel every day. As of Monday, it remained closed to the public.

An attempt by police to clear the area on Sunday was met with fierce resistance, as protesters on the campus set huge fires to block the force’s advances and launched a barrage of petrol bombs, bricks and other missiles. One police officer was shot in the leg with an arrow, as the force responded with round after round of tear gas, rubber bullets and water cannons.

In a statement, the force said that a “large gang of rioters” had hurled petrol bombs at police and “set objects ablaze.”

“At around 5.30 a.m., police (continued) to conduct (a) dispersal and arrest operation,” the statement added. “Meanwhile, rioters gathering inside the campus set fire and caused extensive damage.”

Around 8 a.m. Monday, protesters began leaving the campus, and large numbers could be seen making a break for it. Some were pushed back, however, after police fired tear gas and expanded their cordon. Earlier, protesters had said those attempting to leave were being arrested, and complained that they were being boxed in by the authorities.

Those still stuck inside said the atmosphere was growing increasingly paranoid and desperate.

“Of course we want to leave,” a 23-year-old protester told CNN by phone from inside PolyU. “We are still quite safe currently in the campus, but if we try to leave … they will arrest us. They are just everywhere surrounding campus.”

The protester was not hurt but said he is “worrying about how to tell my parents” who don’t know he is inside the university. His parents think he stayed at his girlfriend’s house.

“We might have to wait for a lot of time,” he said, because he thinks the police strategy is shutting down the road for a few days so they can trap and eventually arrest everyone inside. “Currently around me we just want to escape, we don’t have any equipment to help us fight.”

Photos sent to CNN from inside the campus show what appeared to be a makeshift bomb made from a gas canister with bolts attached.

CNN cannot confirm that it is in fact a viable explosive device, or that it still contains volatile gas. A police spokesman said that gas canisters have been used during protests as weapons against them.

As the sun rose on Monday, there were shocking scenes of destruction in and around the PolyU campus, with barricades, bricks, debris, and umbrellas strewn everywhere.

Around dawn, an enormous cloud of smoke hung over the area, from a large fire set near the entrance to the university. Other fires were set on a key bridge leading to campus, where protesters threw petrol bombs at police vehicles, succeeding in setting one of them on fire and forcing it to retreat.

Protesters have increasingly switched to using a form of napalm rather than just petrol bombs. Even though the substance is typically associated with military action — particularly US bombing during the Vietnam War — napalm is easily created from petrol and household materials, and recipes for doing so have been circulating among protesters since at least last week.

In a statement, PolyU management said “dangerous chemicals” had been stolen from laboratories and condemned the protesters’ “illegal acts and violence” in the campus, which they said had “been widely damaged.”

“We understand that students care about the current social situation, however, they must be calm and rational when fighting for anything,” the statement said. “Resorting to violence or other radical acts will not help solve the problem.”

When CNN visited the campus on Friday, students had built brick walls and set up security checkpoints around the entrances, as others stockpiled petrol bombs, other weapons, and food and water.

The demonstrations began in June over a controversial China extradition bill, which sparked huge marches across the city. When the government suspended but did not withdraw the bill, the movement’s focus quickly expanded to focus on complaints of police brutality and wider calls for democracy.

Escalating protests last week after the death of the HKUST student saw a traffic police officer shoot a protester during a clash in the early hours of November 11, and a man set on fire after he argued with protesters. A 70-year-old man also died after being struck on the head with a brick during a clash with protesters. Police said they were treating that case as a murder investigation.

With both the government and protesters refusing to back down, there is no immediate end in sight to the unrest. Attempts to create a venue for dialog or even background talks have so far failed to get off the ground, hampered in part by the leaderless nature of the protest movement, which makes it difficult to say who, if anyone, could take part in negotiations with the government.

On Monday, Hong Kong’s High Court struck down a controversial mask ban which the government introduced in the apparent hope that making face coverings illegal would help reign in the protests. In the end, the move only further infuriated protesters, and the court ruled that the provision of a colonial-era emergency law it was enacted under was unconstitutional.

Last week, Chinese President Xi Jinping made rare public comments on the demonstrations, saying that “radical” protesters had trampled the city’s rule of law and that “stopping the violence and restoring order” was Hong Kong’s most “urgent task.”