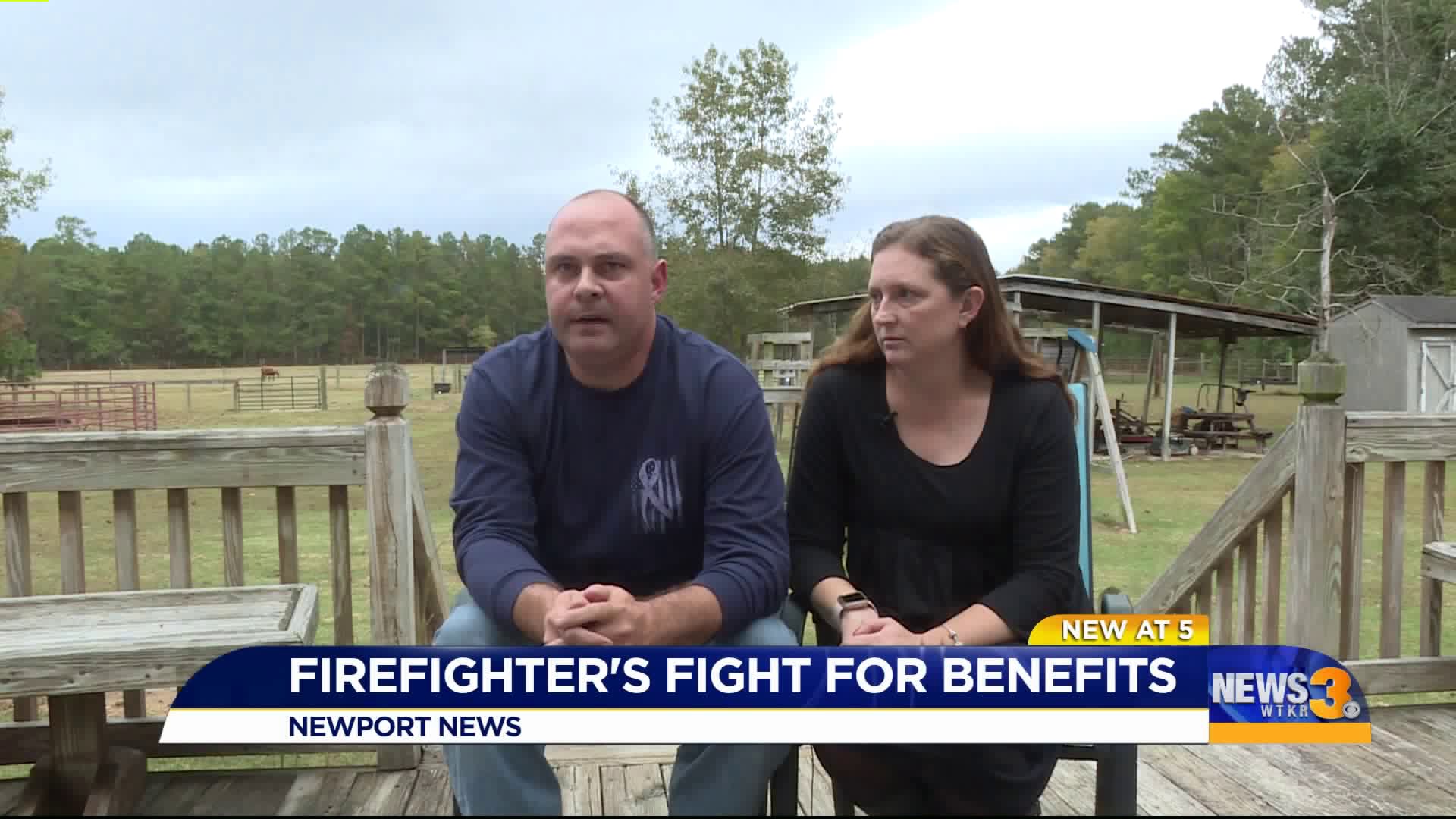 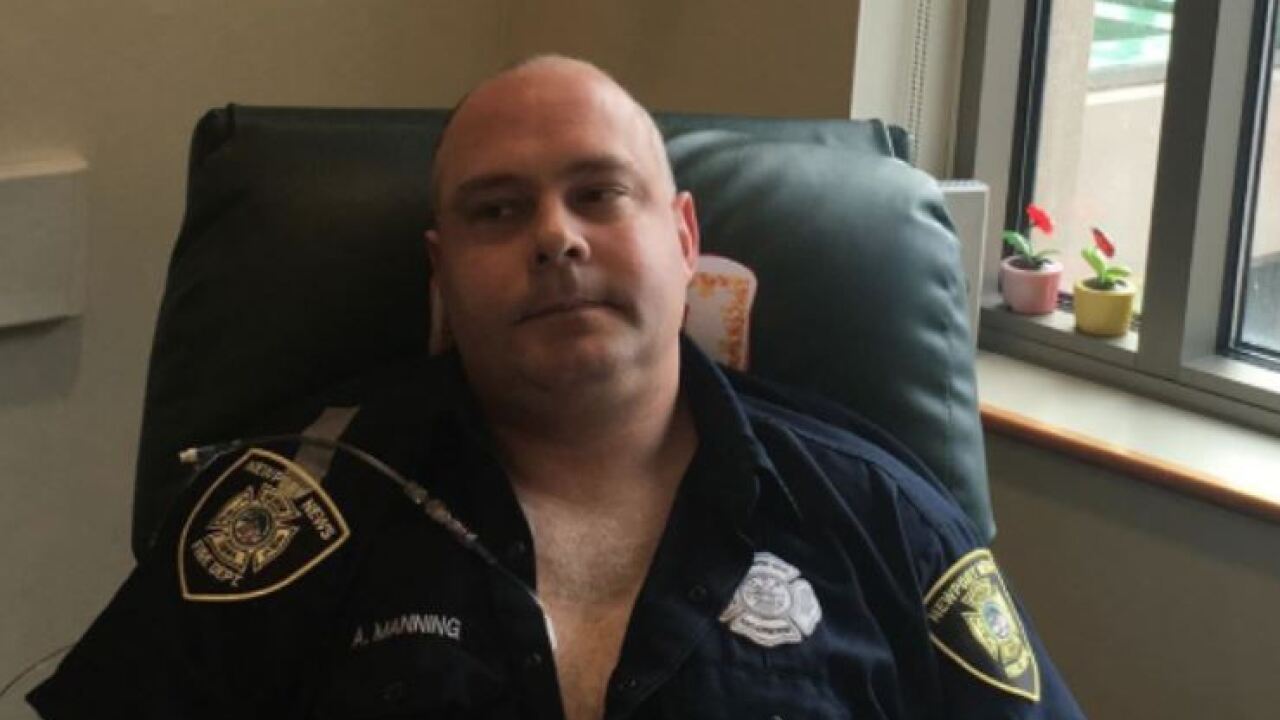 NEWPORT NEWS, Va. - A Newport News firefighter won a battle against the city after surviving cancer. Now, he wants to make others aware of the struggles he has endured and the efforts to changes laws.

Adrian Manning feels lucky to be alive with his family on their small horse farm after being diagnosed with stage 3 rectal cancer on July 10, 2018.

He said has no family history, was diagnosed at the age of 40 and had no other risk factors.

He said he has been a firefighter with the City of Newport News for 17 years.

Over the year, he’s been fighting two difficult battles: One battle to try and stay alive; the other battle the family has been fighting has been with the City of Newport News for workers compensation.

"When we first got the devastating news, of course [we were] really upset,” said Amy Manning, Adrian’s wife.

“My problem is from day one we were told, 'You have this presumptive coverage should something happen to you, we're going to take care of you,’ and then when that day came for me, it was like well, ‘We gotta look at it,'" said Adrian.

Adrian and others like State Senator John Cosgrove believe his cancer was directly caused from his job and chemicals that he had been exposed to while fighting fires.

“They are exposed to much more danger than just in the atmosphere of where they work; not just the flames - the fumes and the toxins in the carcinogens, and they’re part of that environment every day,” State Senator John Cosgrove, (R) District 14.

Adrian continued to work but used up his sick time and personal leave time while undergoing two rounds of chemotherapy, radiation and surgeries. He said his situation qualified him for workers compensation because he has been a firefighter for more than 12 years, had documentation of being exposed to asbestos and had rectal cancer, which is on the list of qualifying cancers.

But, court documents he provided News 3 show the City of Newport News disputed that his cancer was caused from his job as a firefighter and denied his claim.

Adrian got an attorney and went to the Workers’ Compensation Commission and won. The city then filed an appeal and lost. Then, the city filed another appeal but rescinded it.

“I was called into a meeting with my chief and the HR director, and I was advised that they were accepting the claim and that we would be moving forward,” said Adrian.

After a year and three months, he said he finally felt some sort of relief.

Adrian said he loves his job and praised his current chief and department, but says there is a misconception when you get sick.

Cosgrove said he got involved with Adrian’s case and tried to help.

“I feel that Mr. Manning was not treated properly or fairly or compassionately by the city, and I think that needs to stop,” said Cosgrove. “I spoke with the Mayor of Newport News, and they just basically had a ‘talk to the hand’ kind of mentality on this and it made me pretty angry, to be honest with you.”

Cosgrove said he has been fighting to change the law to increase the number of cancers on list that qualifies firefighters for workers compensation.

News 3 has repeatedly reached out to the City of Newport News.

They have refused to answer any questions about Adrian’s case or give any explanation from their standpoint or explain why they didn’t follow through with the second appeal.

They did provide statistics regarding firefighter workers comp and said in the last five years there have been 467 claims filed and 63 denied. They said that is 13.5% of the cases that have been denied.

“This is not just a 'me' situation or my family situation; this potentially affects every first responder in the state of Virginia, and we’re trying to use my situation to spread the word,” said Adrian.

He wants to spread the word that firefighters are at a higher risk for cancer, that they need to monitor their health closely and that you should you know your rights and how to protect you and your family.

He said luckily his exposure to asbestos was documented, but he said the document was not easy to find and he had to complete a FOIA request. He said most firefighters are exposed to dangerous chemicals, but there is no documents or paperwork for them to use to prove they were exposed.

“No firefighter family should have to depend on the generosity of their coworkers and GoFundMe to survive,” said Amy Manning. “There needs to be policy changes or needs to be law changes.”

Amy said the doctor didn’t find any cancer in his recent appointment. They are working with lawmakers and other firefighters to try and get the laws changed in the state of Virginia.