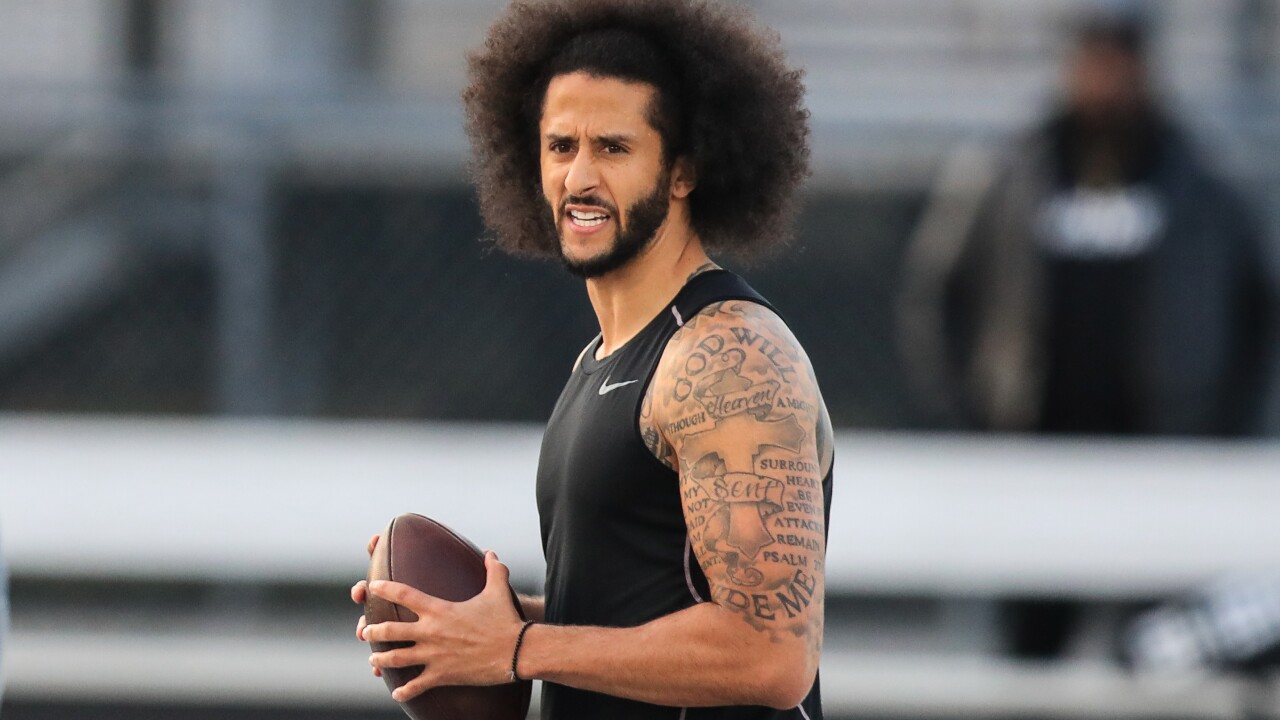 RIVERDALE, GA – NOVEMBER 16: Colin Kaepernick looks to make a pass during a private NFL workout held at Charles R Drew high school on November 16, 2019 in Riverdale, Georgia. Due to disagreements between Kaepernick and the NFL the location of the workout was abruptly changed. (Photo by Carmen Mandato/Getty Images)

ATLANTA – Colin Kaepernick’s workout on Saturday was for far fewer scouts than flew into Atlanta to watch the free-agent quarterback who claimed the NFL and its teams colluded to keep him from playing following his refusal to stand during the National Anthem.

The league said in a statement that Kaepernick called them at 2:30 p.m. ET, saying he would not appear at a workout set up by the league at the practice facility for the Atlanta Falcons. The quarterback held a session in Riverdale, south of Atlanta. Dozens of people flocked to see him.

Representatives for Kaepernick said their client had asked for the session to be open to the media and the NFL had balked. Agent Jeff Nalley and attorney Ben Meiselas also said Kaepernick had been denied being able to have his own film crew.

Colin Kaepernick makes a quick statement at the conclusion of his workout, which he changed the location of last minute

"Our biggest thing with every thing today was making sure we had transparency in what went on. We weren't getting that elsewhere, so we came out here." https://t.co/ow8c9tFq3A

“From the outset, Mr. Kaepernick requested a legitimate process and from the outset the NFL league office has not provided one,” Kaepernick’s reps said in a statement.

Kaepernick’s camp was also upset with the liability waiver the NFL wanted the player to sign, saying it was “unusual” and “addresses employment-related issues.” They said the NFL rejected the standard waiver they had proposed.

The NFL said the waiver it sent was the one used by NFL teams to sign free agents and at the combines for draft prospects.

“I’ve been in shape and ready for this for 3 years, can’t wait to see the head coaches and GMs on Saturday.”

He had not tweeted Saturday, and was at another location in the Atlanta area working out before television cameras.

The NFL indicated that personnel from 25 teams had shown up at the Falcons’ facility, which is an hour away from where Kaepernick was working out.

“The NFL made considerable effort to work cooperatively with Colin’s representatives,” the league said. “Today’s session was designed to give Colin what he has consistently said he wants — an opportunity to show his football readiness and desire to return to the NFL.”

Teams notified this week about workout

The NFL sent a memo Tuesday about the workout for the former San Francisco 49ers quarterback to its 32 teams, ESPN first reported.

According to another source, several NFL teams inquired about the athlete-turned-activist’s “football readiness” and desire to return to the league.

Kaepernick hasn’t played in the league since the 2016 season — the same season he first sat during the playing of the anthem. The protest evolved into kneeling after onetime Seattle Seahawk and Green Beret Nate Boyer convinced Kaepernick it would be more respectful to the nation’s military, the quarterback has said.

Kaepernick said he did so to protest police shootings of African American men and other social injustices faced by black people in the United States.

He became a free agent in 2017. No team offered him a contract, and that October, he filed a grievance against the league, accusing team owners of colluding to keep him from being signed. The NFL denied any collusion. Kaepernick and former teammate Eric Reid, who knelt with Kaepernick, settled their cases.

Earlier this year, Kaepernick posted videos of himself on Twitter, taking part in weight training and throwing footballs.

Kaepernick, who led the 49ers to the 2013 Super Bowl, played his last game on January 1, 2017, in the 49ers’ loss to the Seattle Seahawks. During that season, in which the 49ers were 2-14, Kaepernick threw 16 touchdowns and had four interceptions. He rushed for 468 yards on 69 attempts.

He opted out of his contract after the season and has been a free agent since.