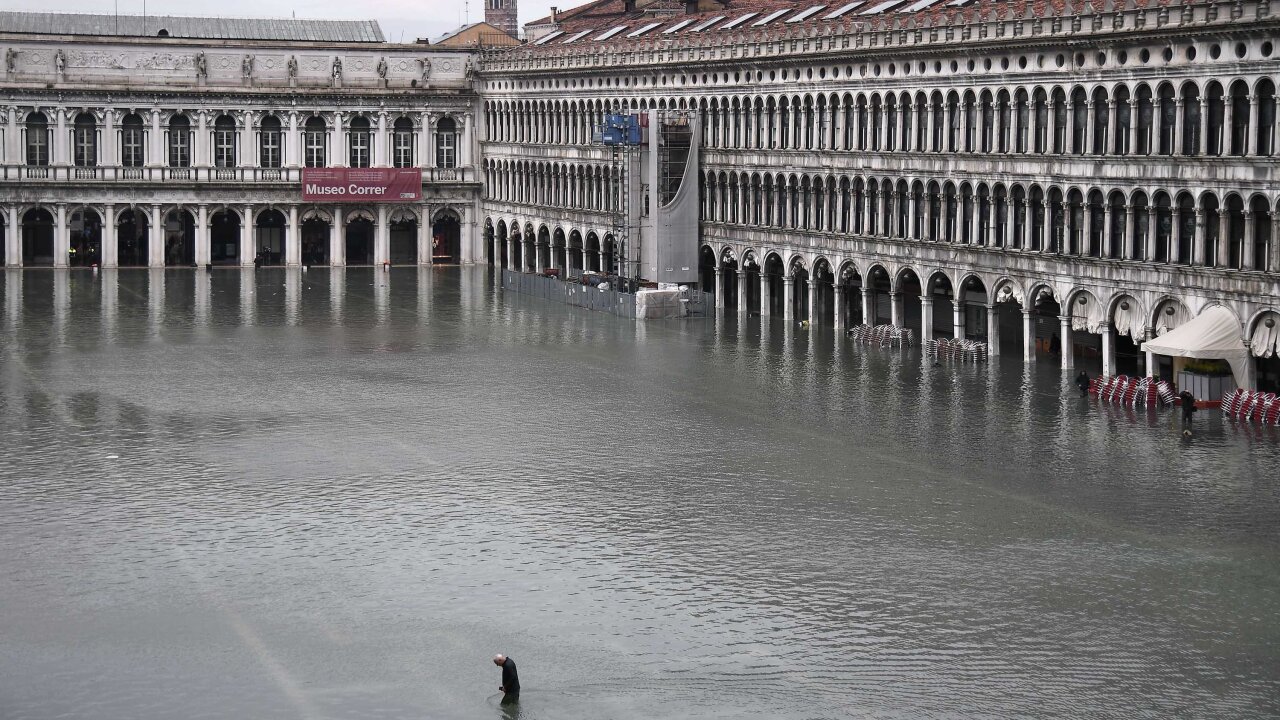 A man crosses the flooded St. Mark’s Square after an exceptional overnight high tide on November 13.

Veneto regional council, which is located on Venice’s Grand Canal, was flooded for the first time in its history on Tuesday night — just after it rejected measures to combat climate change.

A man crosses the flooded St. Mark’s Square after an exceptional overnight high tide on November 13.

The historic Italian city has been brought to its knees this week by the worst flooding there in more than 50 years.

And the council chamber in Ferro Fini Palace started to take in water around 10 p.m. local time, as councilors were debating the 2020 regional budget, Democratic Party councilor Andrea Zanoni said in a long Facebook post.

“Ironically, the chamber was flooded two minutes after the majority League, Brothers of Italy, and Forza Italia parties rejected our amendments to tackle climate change,” Zanoni, who is deputy chairman of the environment committee, said in the post, which also has photographs of the room under water.

Among the rejected amendments were measures to fund renewable sources, to replace diesel buses with “more efficient and less polluting ones,” to scrap polluting stoves and reduce the impact of plastics, he said.

Zanoni went on to accuse Veneto regional president Luca Zaia, who is a member of Matteo Salvini‘s far-right League Party, of presenting a budget “with no concrete actions to combat climate change.”

The regional council’s spokesman Alessandro Ovizach confirmed to CNN that the council was flooded after discussing amendments to the 2020 budget — without specifying which ones.

The council’s president, the League’s Roberto Ciambetti, rejected Zanoni’s accusations in a statement to CNN.

“Beyond propaganda and deceptive reading, we are voting (for) a regional budget that spent €965 million over the past three years in the fight against air pollution, smog, which is a determining factor in climate change,” said the statement.

“To say that we do nothing is a lie,” Ciambetti said. “We are a region that after the 2010 flood launched a plan to safeguard hydrogeological safety for a total cost of €2.6 billion, an exorbitant amount for regional finances.”

Ciambetti also mentioned the €468 million spent in the aftermath of the Vaia storm last year which flattened hundreds of thousands of trees.

Earlier Ciambetti, who posted videos of the flooding at Ferro Fini Palace on his Facebook page, said in a statement to local paper Giornale di Vicenza:

“Never had such a situation occurred here (at the Council). The flood-proof bulkheads were not sufficient to contain the flood wave, nor was it possible to leave the building… It was preferred to guarantee safety and therefore to stay all inside the palace.”

The regional council meetings on Thursday and Friday were moved to Treviso because of the flooding, according to the council’s website.

On Tuesday, Venice’s mayor Luigi Brugnaro blamed climate change for the unusually high tides in Venice, and said the flooding was “a wound that will leave a permanent mark.”