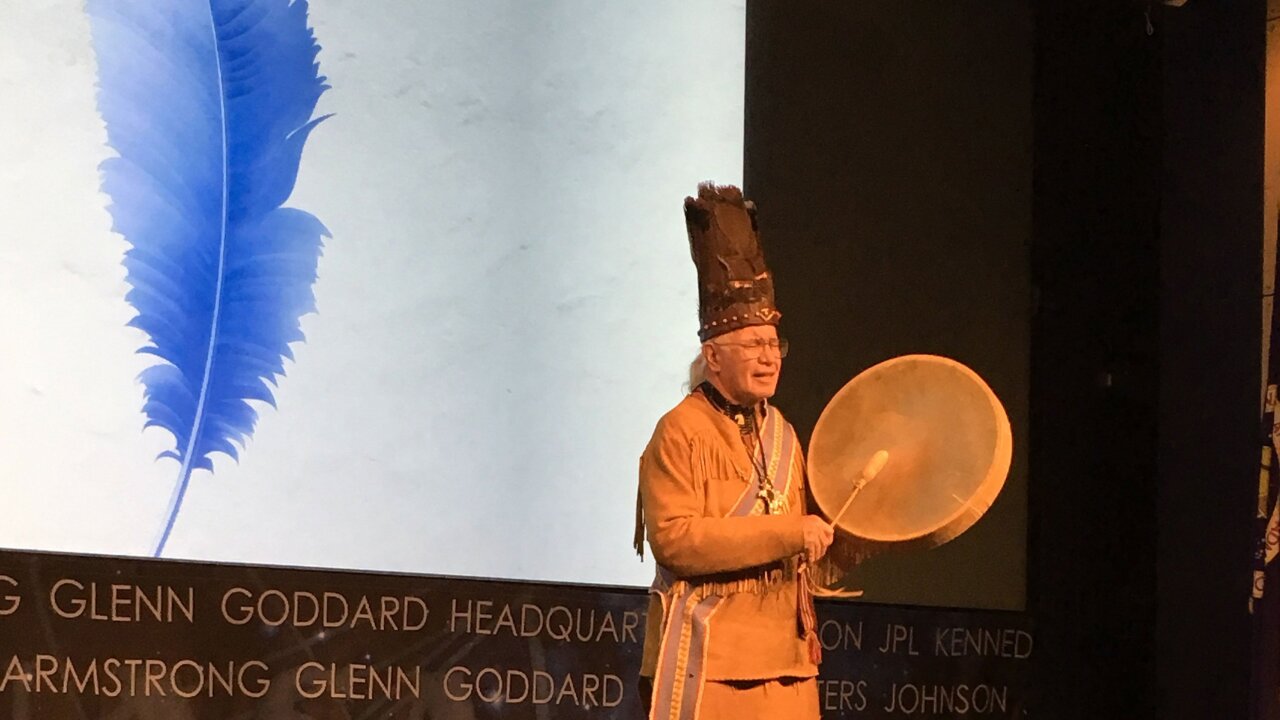 Rev. Nick Miles, of the Pamunkey Tribe, opens the 2014 MU69/Arrokoth naming ceremony at NASA headquarters with a traditional Algonquian song.

To ring in the new year, NASA’s New Horizons probe conducted the farthest ever flyby to distant Kuiper Belt object 2014 MU69, 4 billion miles from Earth. Now, the object has been officially named Arrokoth, a Native American term that means “sky” in the Powhatan and Algonquian language, according to NASA.

Rev. Nick Miles, of the Pamunkey Tribe, opens the 2014 MU69/Arrokoth naming ceremony at NASA headquarters with a traditional Algonquian song.

An official ceremony to announce the name took place at NASA’s headquarters in Washington on Tuesday.

The ceremony was opened with a traditional Algonquian song by Nick Miles from the Pamunkey tribe. Many descendants of the tribe live on the Pamunkey reservation in Virginia and others live in Maryland.

The celestial object was previously referred to as Ultima Thule. The name Ultima Thule was chosen through a nickname campaign hosted by the New Horizons team.

Thule was a mythical island on medieval maps, thought to be the northernmost point on Earth. Ultima Thule essentially means “beyond Thule,” which suggests something that lies beyond what is known.

But in 2018, reports suggested that the name was appropriated by Nazis. Alan Stern, the mission’s principal investigator, addressed that at a press conference after the flyby in early 2019.

“I’ve said it a number of times, I think New Horizons is an example, one of the best examples in our time, of raw exploration, and the term Ultima Thule, which is very old, many centuries old, possibly over a thousand years old, is a wonderful name for exploration,” he said. “I would say that just because some bad guys once liked that term, we’re not going to let them hijack it.”

But Ultima Thule was just a temporary nickname.

“The name ‘Arrokoth’ reflects the inspiration of looking to the skies, and wondering about the stars and worlds beyond our own,” said Stern, who’s with the Southwest Research Institute in Colorado, in a statement. “That desire to learn is at the heart of the New Horizons mission, and we’re honored to join with the Powhatan community and people of Maryland in this celebration of discovery.”

Elders and representatives from the Powhatan tribe gave their consent for the name, which was submitted to the International Astronomical Union’s Minor Planet Center. The IAU acts as the global authority for naming space objects such as those found in the Kuiper Belt. The New Horizons team was given the honor of choosing the official name of the object.

“We graciously accept this gift from the Powhatan people,” Lori Glaze, director of NASA’s Planetary Science Division, said in the NASA statement. “Bestowing the name Arrokoth signifies the strength and endurance of the indigenous Algonquian people of the Chesapeake region. Their heritage continues to be a guiding light for all who search for meaning and understanding of the origins of the universe and the celestial connection of humanity.”

The New Horizons mission conduced a flyby of Pluto and Charon in 2015 and went on to meet Arrokoth in January.

Arrokoth is an object 1 billion miles past Pluto in the Kuiper Belt, where icy leftovers from the creation of the planets in the solar system orbit the sun at vast distances. It’s made up of two lobes that are flat like a pancake. The object is 22 miles long and it’s a contact binary, meaning that gravity gently pushed the two objects together.

“Data from the newly-named Arrokoth, has given us clues about the formation of planets and our cosmic origins,” said Marc Buie, New Horizons team member at the Southwest Research Institute. “We believe this ancient body, composed of two distinct lobes that merged into one entity, may harbor answers that contribute to our understanding of the origin of life on Earth.”