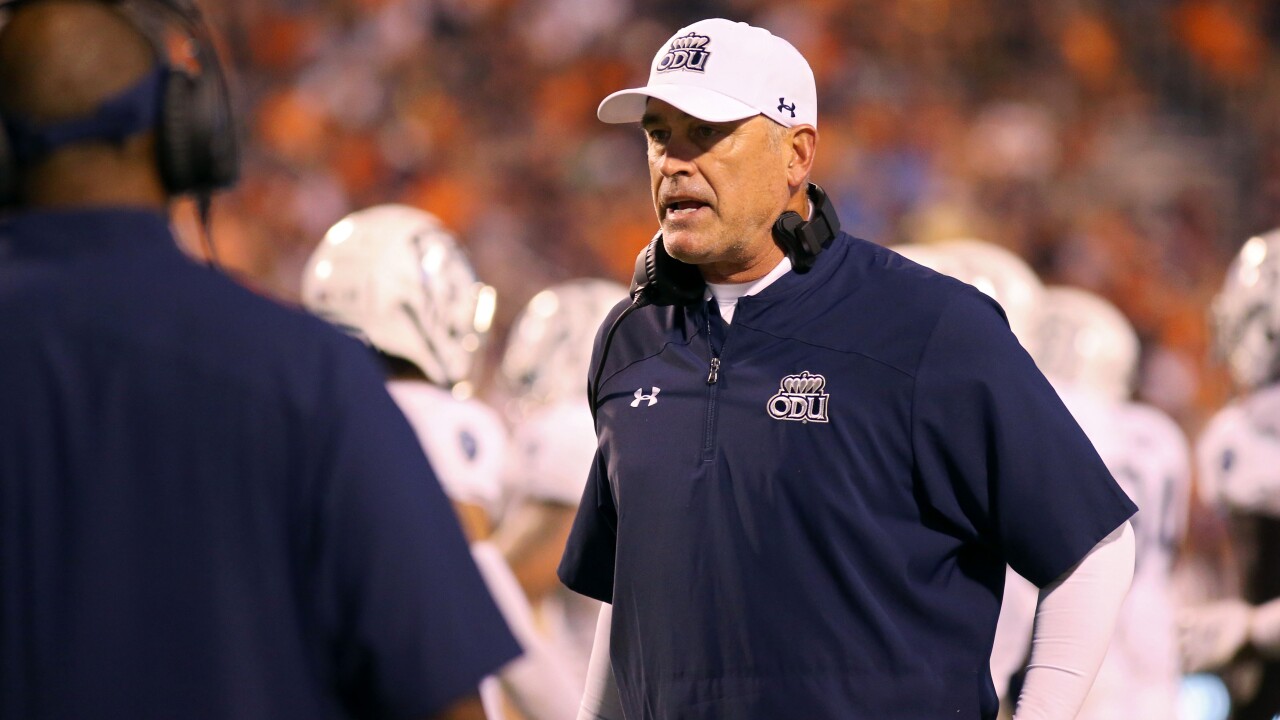 NORFOLK, Va. – On the football field, things have never been worse for Old Dominion University and head coach Bobby Wilder. But the 11th year bench boss is certain things will get better.

Saturday, ODU let a 23-10 fourth quarter lead slip away in a 24-23 home loss to UT-San Antonio. The defeat dropped the Monarchs to 1-and-9 on the season and 0-and-6 in Conference USA play. ODU’s lone win of the season is a 24-21 triumph on August 31st vs. Norfolk State – a Football Championship Subdivision (FCS) program. The nine game losing streak is the longest in program history and the nine losses is the worst in any single season since ODU relaunched its program in 2009.

Saturday’s game was played in front of an announced crowd of 16,297 – the smallest attendance this season for newly-opened S.B. Ballard Stadium.

“I would tell them to stick with us,” Wilder told News 3 when asked for his message to fans who expect better results. “We’re a young team, we’re injured right now. We finally have the quarterback (Hayden Wolff), we believe, that will lead us into the future. This team will not stop fighting. This coaching staff will not stop fighting. I’m confident we will have better results in the last two games. I completely understand the frustrations of everybody – they want better results. We’ve got new systems in on offense and defense.”

However, ODU’s offense ranks dead last (130 of 130) in total offense. The Monarchs are averaging just 250 yards per game. Wilder says he will not consider any staff changes during the team’s bye week.

“This is the clearly the best staff I’ve ever had – the best group of assistants,” Wilder said Monday. “We’ve finally got some really good continuity and coaching expertise on defense. Everybody sees it. With the quarterback, everybody just saw the production Saturday in the game in only Hayden Wolff’s second start. There’s a lot to be hopeful for in the future.”

But when it comes to the future, there are some questioning whether or not Wilder, whose contract runs through the 2021 season, should be retained after the program’s third straight losing season.

“That’s the reality of my situation and everybody’s situation in this program,” Wilder admitted. “We have to prove to everybody that, moving forward, we are the staff and the team that can win in the future. It’s going to be 100 percent important that we perform well in these last two football games. As a leader, the number one thing you have to do is be honest. You have to explain the reality and then the hope. The point I’ve made to them repeatedly is adversity defines your character. Everybody can do well when you win the lottery every week. But what do you do when you get punched in the face? We’re clearly being punched in the face and every other part of our body right now. Whatever does not break you makes you stronger. Right now, we’re gaining strength as a team and as a family through what we are experiencing, the results, on the football field.”

Following a bye week, ODU plays at Middle Tennessee – a program its never defeated. Then, the Monarchs return home for their season finale November 30th vs. Charlotte

“In 2015 we lost seven games – we were blown out in six of them,” Wilder pointed out. “That team used that as a motivation going into next year to win 10 games. It was very similar to the roster we have. We had a lot of guys coming back. We had an established quarterback in David Washington. That team just took off the next year. This team is motivated to win these last two games – but to set the stage for what they know they can do next year.”

"We have to prove to everybody that we are the staff & the team that can win in the future. Stick with us."