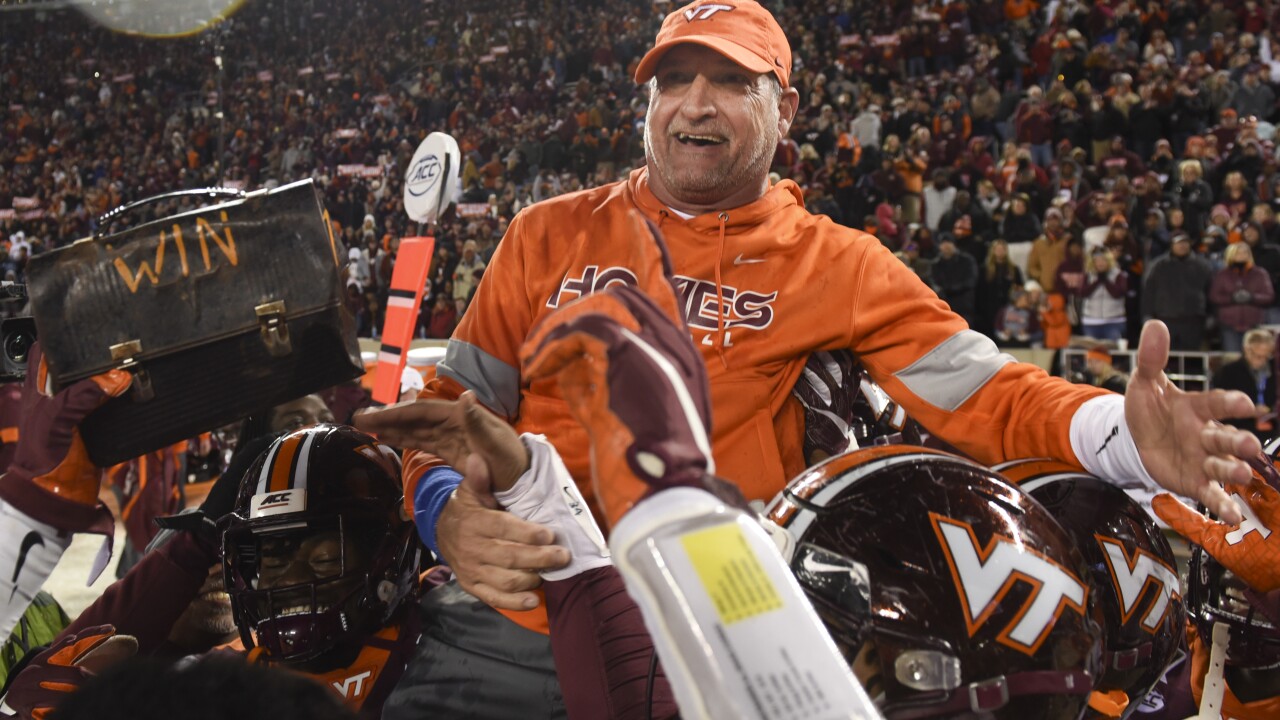 BLACKSBURG, VA – NOVEMBER 9: Defensive coordinator and associate head coach Bud Foster of the Virginia Tech Hokies is lifted into the air following the victory against the Wake Forest Demon Deacons at Lane Stadium on November 9, 2019 in Blacksburg, Virginia. (Photo by Michael Shroyer/Getty Images)

BLACKSBURG (HokiesSports.com) – Hendon Hooker accounted for 311 yards of total offense and ran for a touchdown, and Virginia Tech received an outstanding game from its defense, all of which helped the Hokies upset No. 22 Wake Forest 36-17 in an ACC game played Saturday afternoon at Lane Stadium.

With the victory, the Hokies moved to 6-3 overall, 3-2 in the ACC, and they won for the fourth time in their past five games. Wake Forest fell to 7-2 overall, 3-2 in league play.

“It was fun to be a part of,” Tech head coach Justin Fuente said. “I go back to this – I’m really proud of our kids. They just continue to battle and block out the noise and work hard and stick together, and it’s fun to get to see them reap some benefits.”

The Hokies, who need just one more win to become bowl eligible for the 27th consecutive season, overcame a 10-6 halftime deficit by scoring 30 second-half points and they beat a ranked team for the first time since last year at then-No. 22 Duke.
Deshawn McClease scored touchdowns on back-to-back possessions in the third quarter. His 6-yard touchdown run with 7:02 remaining in the quarter gave the Hokies a 20-17 lead — one they never would relinquish. He had 59 of the Hokies’ 228 yards rushing.

Hooker completed 15 of 23 for 242 yards and rushed for 69 yards. His 7-yard touchdown run with 4:38 remaining sealed it.
Tech’s defense, though, was the story of the game, as the Hokies held Wake Forest to season lows in yards (310) and points. Wake Forest came into the game ranked seventh nationally in total offense (510.6 ypg) and eighth in passing offense (323.6 ypg).

Newman completed just 16 of 35 passes for 238 yards with two touchdowns and two interceptions.

How About Those Hokies ❗️

Get a banner, get a W, get a game ball, give a postgame speech ❗️

GAME NOTES
• Tech’s victory marked its first home win against a ranked opponent since a 31-7 victory against No. 9 Miami in 2009.

• Tech moved to 10-1 over teams from the state of North Carolina under Fuente.

• Tech’s defense now has 28 sacks on the season – just one year after recording only 24 the entire 2018 season.

• For the third time this season, the Hokies allowed less than 100 yards rushing, and they’ve won all three of those games.

• Hooker is now completing nearly 60 percent of his passes on the season and has yet to throw an interception in 84 attempts.

• McClease’s two touchdowns give him five rushing touchdowns on the season and 10 in his career.

• Mitchell’s touchdown run marked his third rushing touchdown of the season and his fourth overall.

• Tré Turner led Tech with a career-high 73 yards rushing on just four carries. He had a career-long 57-yard run in the game.

UP NEXT
Tech returns to action Saturday when it takes on Georgia Tech in Atlanta, and the Hokies will be looking to snap a three-game losing streak to the Yellow Jackets. The game kicks off at 3:30 p.m. and can be seen on the Regional Sports Network.