His dad has been deployed 10 times. This is his message to other military kids 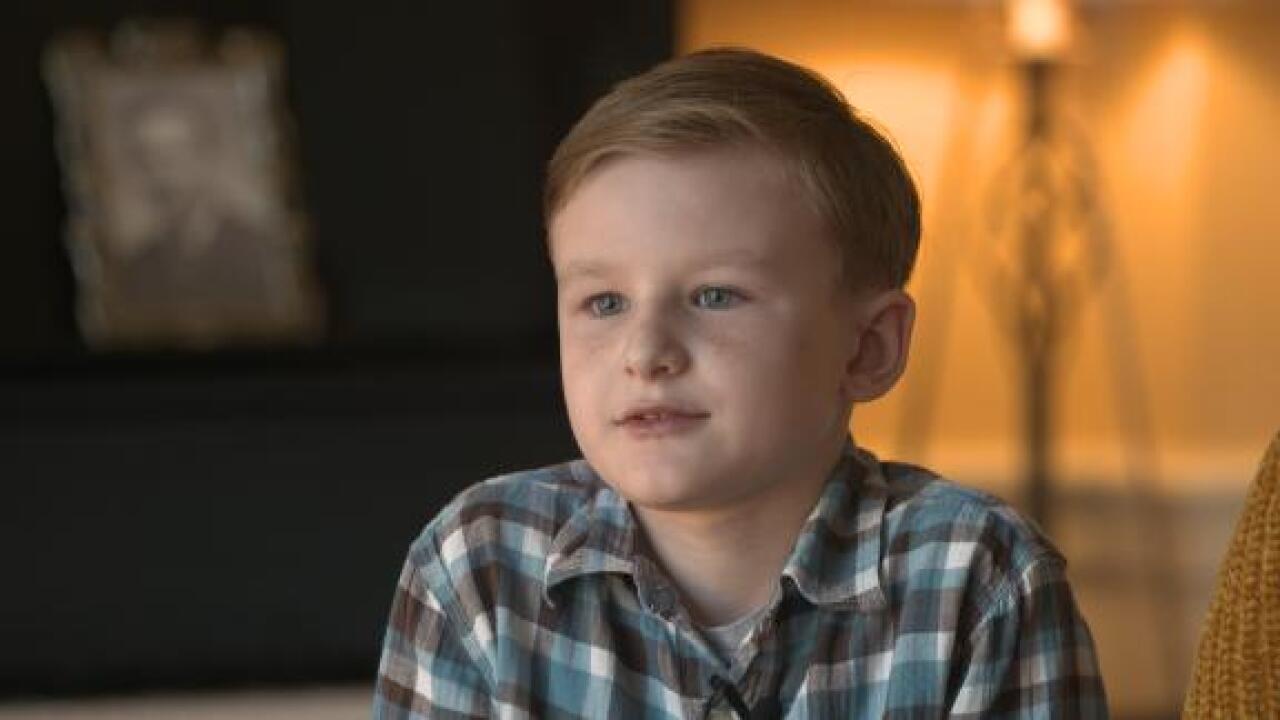 Davidson is only 9 years old, yet he’s been the man of the house eight times while his dad serves his country.

His father, Dave, is a Green Beret on his 10th deployment. The family lives in northern Virginia while Dave is stationed somewhere overseas. Davidson is used to not having his dad around, but he never forgets him.

“Sometimes it’s fine, because we actually do a lot of fun things while he’s away, but it’s also sad because he’s just not here,” Davidson told CNN. “My mom sometimes breaks down and cries a lot because she misses him. And it’s not really hard for her, because I help her, but it’s just that she misses him.”

From 2001 to 2015, 2.77 million service members have been deployed overseas, many of them mothers and fathers leaving families behind.

Davidson sees the world matter-of-factly, approaching his dad’s deployments with the strength that many military families display.

“I don’t even know where he is, but I think he’s fine because he’s a good, strong guy,” he said.

Each family deals with the hardship in their own way. This is how Davidson’s family does it. They asked that CNN not use their last name for security reasons.

Davidson helps his mom, Elizabeth, whether it’s holding his youngest sister or reading bedtime stories to his three younger siblings.

But Davidson does more than read books. When he was 6, he wrote a book about about what a military parent’s absence means to a child.

Davidson’s book is finally coming out just in time for this Veterans Day. It’s called “Brave for my Family” and was published under a pen name, Davidson Whetstone. His father illustrated the book.

When Davidson was 3, his dad was wounded by a rocket-propelled grenade in Afghanistan days before Christmas in 2013.

“My mom cried and I was pretty scared that my dad was going to die,” Davidson wrote in the book. “We got on an airplane to Washington, DC.”

Dave was flown to Germany and then to Walter Reed National Military Medical Center, where he underwent several surgeries. Shrapnel hit him in the face and down his right side, missing his carotid artery by millimeters. He lost peripheral vision in his right eye and shrapnel remains in his body today.

Davidson said he doesn’t remember how he felt when he learned about what happened to his dad. He just remembers being grateful to see and hug him.

“I wanted to write the book because I wanted to show other kids that they won’t have to be scared when their dads are deployed to countries where war is going on and scary things,” Davidson said.

Seeing the illustration of Dave in the hospital brings back the emotions of what happened.

“When you look at it in the book, it just looks so real,” Elizabeth said in between tears. “It brings me back to that day where I walked in and I saw him hugging Davidson and all his shrapnel wounds.”

She remembers thinking, “OK, Jesus, you’re still here and we’ll get through this.”

As Dave recovered in the hospital, a visitor showed up Christmas 2013 and promised Dave they’d do lunch sometime. In 2014, the visitor came through. The whole family went to Vice President Joe Biden’s house and broke bread.

Together they wrote a book

A few years later, the father and son decided they wanted to share their story. Dave suggested the idea of a book.

Dave was home between deployments, so he and Davidson would sit together after church on Sundays and work on the book. Davidson would write and his dad would draw. It was their time together.

Drawing had always been a passion and a way for Dave to organize his thoughts when he was young.

“After losing half the vision and near sight in my dominant eye, it became much more difficult to draw,” Dave wrote in an email from overseas.

“But, illustrating Davidson’s story gave me a strong motivation to create a meaningful representation of our family’s sacrifice and courage. It also allowed me to spend time recalling and appreciating the details of our family’s experience, and to come to terms with some things,” he wrote.

Dave said he feels grateful to have his family in his life, especially his wife, who raises their four children while he’s away.

“I can’t express how proud I am of my whole family, and how immeasurably blessed I am to have each of them in my life. I am so proud of Davidson for writing this book, but if I’m being honest, this is only a snapshot of his talents and passion as a good young man.”

Dave and Elizabeth knew each other in college, but they didn’t date until later. They had a whirlwind romance, getting married in 2008. Dave went to Special Forces training. Military life is the only life Elizabeth has known from the time they met.

Several months after Davidson was born in 2010, Dave went on his third deployment. Dave has been gone for some part of almost every year of their marriage, ranging from three months to a year for training or deployment, Elizabeth said.

“I have four kids and it’s busy at home,” Elizabeth said. “When I stop and someone really wants to know about our life, it’s kind of the reality of yeah, it is sad. I do miss him, and it is hard, but I’ve done things that I never thought I could have done by myself with four kids.”

Elizabeth cares for her children and homeschools them. The family talks about why Daddy is gone so often. The older children seem to understand why.

“This is all I’ve known, that their daddy goes away because it’s for us, for our country and to keep us safe,” she said. “They know that we talk openly about why he does what he does.”

Having a partner deployed can be a challenge, especially for a family with small children.

When she had strep throat earlier this year, Elizabeth had to take all four children with her to the emergency room. Their homeschool co-op set up a meal train for Elizabeth, and others in her circle sent encouraging texts.

“Deployment can be a profound experience for families and most families come through it fine,” said Shelley MacDermid Wadsworth, director of the Military Family Research Institute at Purdue University. “Military families are known for being resilient. But it also can expose families to a wide variety of challenges, and particularly if somebody’s injured.”

MacDermid Wadsworth is a professor who has studied military families for 20 years. In that time, research has shown that service members, their spouses and their families have exhibited higher rates of mental health symptoms tied to a deployment, she said. If a service member is exposed to trauma or is injured, the risk goes up.

“There’s a lot of concern about deployments that happen early in children’s lives because it’s coming at a time where kids are learning how to relate to others,” MacDermid Wadsworth said. “How kids do is very much a function of how parents do.”

Keeping in touch with the deployed family member is a big part of staying close as a family.

“There’s been enormous creativity over the last few years in helping folks to stay connected during deployment,” she said. “There are lots of examples of clever care packages and storybooks that are really well suited for kids and parents who are separated.”

The toughest sacrifices are the ones his family makes

Dave calls his family when he can, but he also sends audio recordings or videos for Elizabeth to play for the children. He has one of him reading daughter Lily James’ favorite book.

“It’s changed a little with every child I have had,” Elizabeth said. “When I just had Davidson, I had all these books that Dave would read, and we would videotape him, and I would play it for him.”

Each time Dave goes out on a mission, Elizabeth and her children pray for his safe return. He recorded himself praying, and the kids pray along with the recording when he’s not at home.

“I have been wounded in combat, and I have lost close friends,” Dave wrote. “But, for me some of the toughest pills to swallow are not being there for first words, first steps, first Christmases, first birthdays, and all the moments that you’ll never have again. The hardest thing is watching my kids grow up in pictures.”

So is waving goodbye as he heads on another deployment.

“We know what it’s like to have a spouse deployed. He’s on his 10th deployment,” Elizabeth said. “We hope this book will be an encouragement to other military kids and families.”

Proceeds from the book will go toward organizations like Green Beret Foundation that support military families and wounded warriors.

“We are so strong and I feel like we’ll get it done no matter what,” she said, “but it’s so sweet when someone does the littlest act of kindness to our family because it helps so much.”

Texts of encouragement, like “I’m praying for you” or “I’m thinking about you,” have comforted the military mom. And, she said, people should befriend military kids. They have to move around a lot. Davidson has moved nine times in his 9 years of life.

For other military children, Davidson has a message.

“I want people to feel brave, not afraid, and happy because your dad’s going to be OK,” he said.