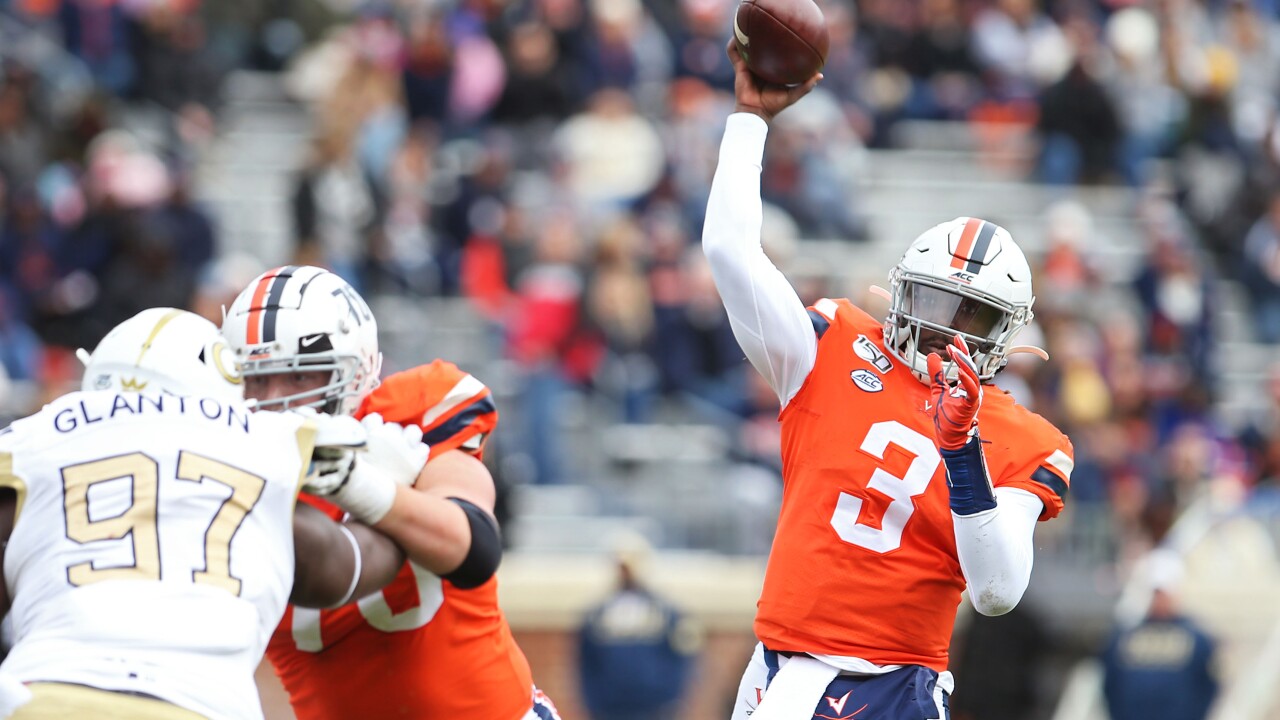 CHARLOTTESVILLE, VA – NOVEMBER 09: Bryce Perkins #3 of the Virginia Cavaliers throws a pass in the first half during a game against the Georgia Tech Yellow Jackets at Scott Stadium on November 9, 2019 in Charlottesville, Virginia. (Photo by Ryan M. Kelly/Getty Images)

UVA held the Yellow Jackets without a score in the second half until the 5:30 mark of the fourth quarter. Virginia finished with 413 total yards of offense and Georgia Tech had 372 total yards. The Cavaliers were 6-for-6 in the red zone.

HOW IT HAPPENED
Georgia Tech scored on its first drive of the game. UVA responded with a touchdown by RB Wayne Taulapapa (Laie, Hawaii) to tie the game 7-7. The Yellowjackets scored on the ensuing drive. On Georgia Tech’s next drive, SS Joey Blount (Atlanta, Ga.) had an interception and returned it 38 yards to set up a 9-yard touchdown pass from Perkins to WR Joe Reed (Charlotte Court House, Va.). Brian Delaney (Chantilly, Va.) added a field goal to give UVA its first lead. Georgia Tech scored with 44 seconds remaining in the half. Virginia countered with a touchdown in 33 seconds as Perkins had a 43-yard rush and then ran it in from three yards out to give UVA a 24-21 lead at the half.

Virginia converted a field goal and added a touchdown by Taulapapa to lead 33-21 with 10:57 remaining. Georgia Tech scored with 5:30 to go, but UVA held the Cavaliers without another score.

With 258 passing yards, Perkins passed No. 8 Marques Hagans, No. 7 Marc Verica and No. 6 Aaron Brooks on UVA’s all-time career passing list. He is the seventh Cavalier all-time to pass for over 5,000 career yards.

Virginia will have the week off next weekend before hosting Liberty on Saturday, Nov. 23.