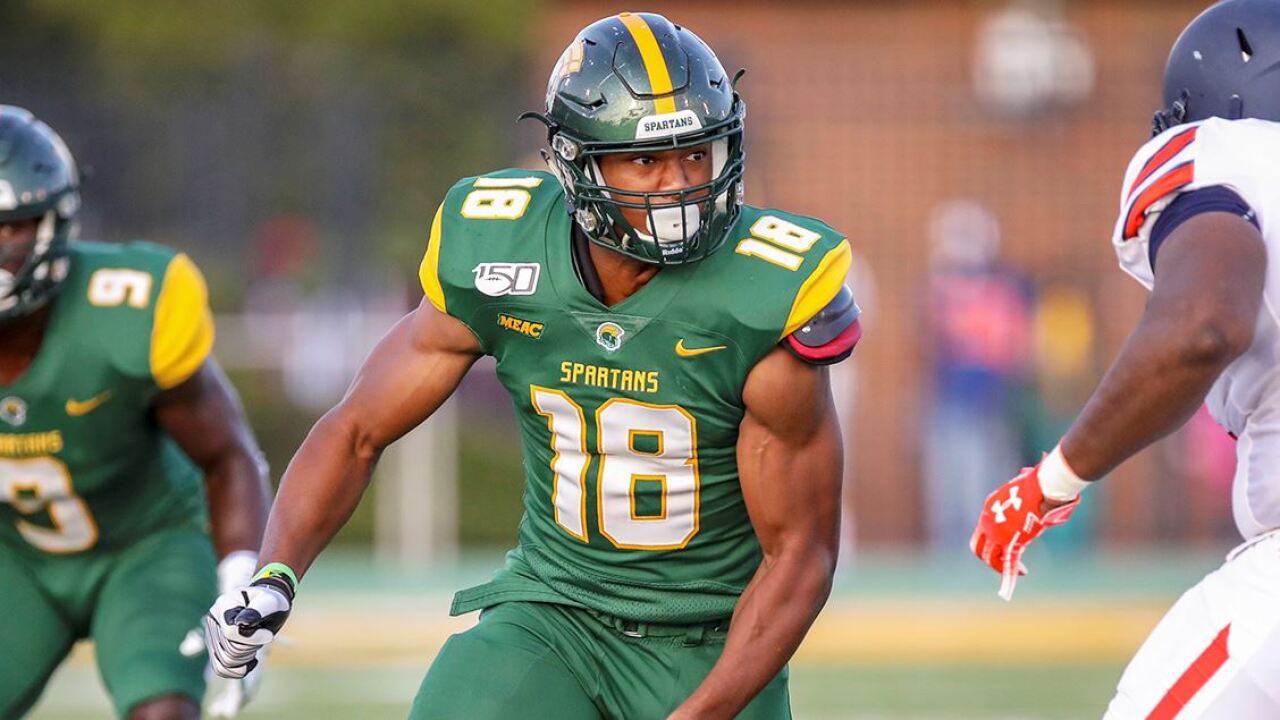 DURHAM, N.C. (NSUSpartans.com) – Visiting Norfolk State registered eight sacks, one leading to a momentum-swinging touchdown in the third quarter, as the Spartans came away with a 38-21 win over North Carolina Central on Saturday afternoon at O’Kelly-Riddick Stadium.

Juwan Carter passed for 249 yards and two touchdowns and also ran for a score in another efficient performance for NSU (4-6, 3-3 MEAC), which won its second straight game and for the third time in the last four games. It was also the Spartans’ second straight win over NCCU (4-6, 3-3) in Durham.

Coming off their first shutout since 2012 in last week’s win over Morgan State, the Spartan defense harassed NCCU quarterback Davius Richards to the tune of eight sacks – a feat which no Spartan team had accomplished since that same 2012 season, in a win over Morgan State. One sack, by senior end Ricky Thomas Jr., resulted in a fumble by Richard that De’Shaan Dixon returned 5 yards for a touchdown and a 31-14 Spartan lead with 5:48 left in the third quarter.

The Spartans jumped to a quick 10-0 first-quarter advantage on the strength of a 29-yard Josh Nardone field goal and a 53-yard TD pass from Carter to Justin Smith. NCCU cut its deficit to 10-7 on a 26-yard TD pass from Richard to Treveyon Pratt with 11 seconds left in the period.

The Spartans went back ahead by 10 on Kevin Johnson’s 2-yard TD run with 11:19 remaining in the second quarter. It was the freshman’s 10th total touchdown of the season.

Dixon helped keep the lead at 17-7 entering the half when he dropped Eagle running back Jordan Currie-Elliott for a 1-yard loss and 4th-and-1 with 1:05 left in the half.

The Eagles again drew within three, 17-14, when Richard tossed a 23-yard TD pass to Daeshawn Stephens on their first drive of the third quarter. But Carter directed a 12-play, 70-yard drive to stem the tide. Carter scored his sixth rushing touchdown of the year on a 1-yard option keeper on 4th-and-goal to end the 5-minute, 38-second possession.

Thomas and Dixon then combined for NSU’s second defensive touchdown in as many weeks on the first play of the ensuing possession. Thomas beat his blocker around the left end of the defense and jarred the ball loose from Richard, and Dixon scooped up the loose ball and scored with 5:48 left on the third-quarter clock.

Carter had the back-breaker in the fourth quarter when he capped a 10-play, 84-yard drive with a 26-yard TD pass to Marcque Ellington with 4:24 remaining in the game.

Richard tacked on his third TD pass of the game, a 14-yarder to Stephens, with 1:10 left to complete the scoring.

Carter completed 16-of-26 passes for 249 yards while accounting for three more touchdowns. He now has 21 touchdown passes on the year, the most by a Spartan quarterback in the Division I era and third all-time in school history behind Aaron Sparrow’s seasons of 32 (1995) and 31 (1994).

Chris Myers had 2.5 sacks and Dixon had two for the Spartans, who now have 18 sacks in their last four games. In addition to his touchdown, Dixon finished with a team-high three tackles for loss, was credited with three quarterback hurries, and also broke up a pass.

Richard passed for 384 yards in defeat. But the Eagles were held to 68 yards rushing, a season low by a Spartan opponent and the second straight team held to less than 100. The Eagles had minus-5 yards on the ground through three quarters.

The Spartans look to extend their win streak to three next Saturday, when they play a 2 p.m. game at Delaware State.