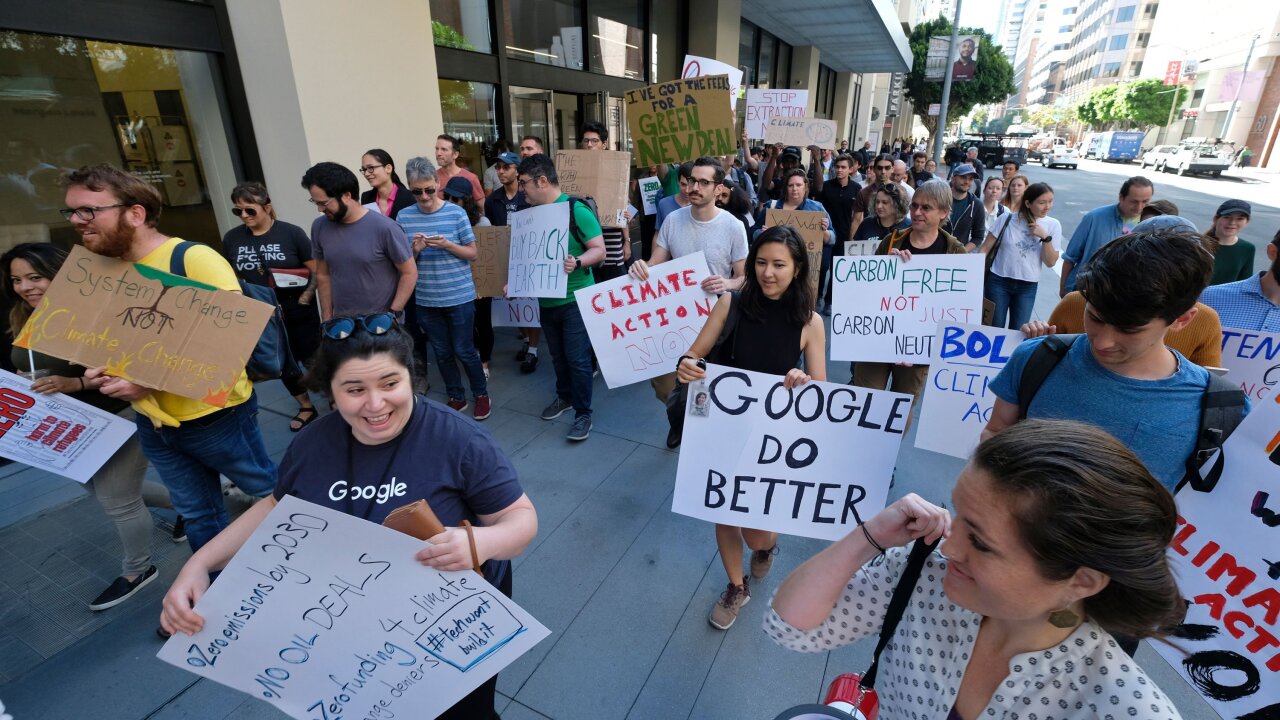 In an open letter published November 4, 2019, addressed to Google CFO Ruth Porat, workers are asking for a climate plan that incorporates specific asks that have similarly been set by workers at other tech companies, including Amazon and Microsoft.

Googlers are calling on the company to address specific climate demands.

In an open letter published Monday addressed to Google CFO Ruth Porat, workers are asking for a climate plan that incorporates specific asks that have similarly been set by workers at other tech companies, including Amazon and Microsoft.

In an open letter published November 4, 2019, addressed to Google CFO Ruth Porat, workers are asking for a climate plan that incorporates specific asks that have similarly been set by workers at other tech companies, including Amazon and Microsoft.

The four demands Googlers are calling for include: Zero emissions by 2030; no contracts that enable or accelerate the extraction of fossil fuels, which are responsible for a large percentage of greenhouse gas emissions; no funding for think tanks, lobbyists or politicians who deny climate change; and no collaborating with those enabling “incarceration, surveillance, displacement, or oppression of refugees or frontline communities.”

The letter, posted to Medium by a group called Google Workers For Action on Climate, was signed by more than 1,100 workers at Google. According to a climate change report put out by Google’s parent company, Alphabet, Porat has the “highest level of direct responsibility for climate change” with “visibility across all of the company’s operations.”

Google declined to comment but pointed CNN Business to a recent post from Porat concerning sustainability. In the post, she detailed how the company has been carbon-neutral since 2007 and recently made the largest corporate renewable energy purchase. But according to Google’s 2019 Environmental Report, it put 1.2 million metric tons of carbon dioxide equivalent, or greenhouse gas emissions, into the environment last year, which it covers with offset programs.

It is the latest example of worker activism in motion at Google, whose workers walked out of offices around the globe in droves one year ago in protest of the company’s handling of sexual harassment, misconduct and a lack of transparency.

Hundreds of Googlers were among tech workers who participated in climate strikes on September 20, ahead of the climate summit at the United Nations. Now, Googlers are pushing the company to address their concerns.

Following pressure from Amazon workers ahead of the strike, CEO Jeff Bezos announced on September 19 a broad climate plan, including committing to being net zero annual carbon emissions by 2040, which the company’s workers praised as “a huge win” but also “not enough.”

“After I joined the Global Climate Strike and read the Amazon workers’ demands, I realized the support I provide to the oil business puts CO2 in the atmosphere, the revenue I bring in is funding climate-denying politicians, and the growth I facilitate increases carbon-releasing energy production,” David Newgas, a technical program manager for the Google Cloud Platform who signed the letter, told CNN Business.

“It is very personal,” said Newgas, who also participated in the September strike.

But there is some indication that the company is taking note of workers’ concerns. CEO Sundar Pichai said Google “could achieve zero emissions by 2030,” according to a report from the Financial Times in September. However, The Guardian recently reported Google has given large contributions to organizations that have denied climate change — a move that sparked criticism. It told the publication it is “hardly alone among companies that contribute to organizations while strongly disagreeing with them on climate policy.”